Photo Courtesy Of Kaatia Larsen TELLING HER STORY David Norum (center) joins the all-female cast of his original play, My Name Is..., when it was performed at Pink Flamingo Theatre in Monterey.

Templeton resident David Norum's original play, My Name Is..., based on a domestic violence case he worked on as a district attorney's investigator, can be viewed on his YouTube channel (search: David Norum).

Local playwright David Norum's original play, based on a true story of a domestic violence case, had two staged readings at Studios on the Park in Paso Robles Jan. 10 and 11. But before he ever began working on the five-minute monologue, which has now evolved into his hour-long production called My Name Is..., Norum worked in law enforcement.

"This play is based on the last case that I worked as a district attorney investigator," Norum told New Times.

The cop-turned-playwright said that though he worked on many cases of domestic violence, the one that inspired this play—told from the perspective of 17 women involved either with the case or victims of the male perpetrator—was particularly "horrendous." The violence itself lasted about 20 years, and when the primary survivor and her daughter were able to escape their situation, they faced what Norum called "a long, convoluted process." After being assigned to investigate the allegations, Norum became deeply familiar with the case and what that long process entails.

"Investigators work on their own most of the time, so I did 50 or 60 interviews myself in regards to this case," Norum said. "District attorney's investigators attend the entire trial. It was a three-week trial, so I was privy to all of the testimony and just about 99 percent of the witness statements."

After becoming friends with the case's survivor over the course of their many interviews together—and even putting off retirement so he could see the long case to its finish—Norum asked the survivor for her permission to write a five-minute inspired monologue for SLO Repertory Theatre's "No Shame," a former program encouraging local playwrights and actors to collaborate on short projects, performed one evening per month. For My Name Is..., Norum knew exactly who he wanted to cast as the survivor whom he had gotten to know so well, and under such intense circumstances.

"I wrote it specifically for an actor, Suzy Newman. If you follow local theater around here, everybody knows Suzy," Norum said.

Newman also acted in Norum's staged readings on Jan. 10 and 11.

"I had this really meaty story, and I wanted to write a really meaty monologue," Norum said. "And I knew Suzy could deliver it."

After the monologue went over well at "No Shame," Norum went on to write a 30-minute extended version after he was approached by a student-directed one-act play festival at Arroyo Grande High School. From there, Norum developed his final version that he staged at Studios. The setup is ideal for the type of theater that he created, Norum said. 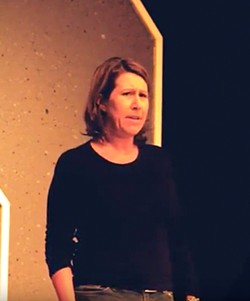 "It's really suitable for a staged reading because it's really a series of intertwined monologues," he said.

Norum emphasized that he made a point to center the women's voices in the play and to minimize the voice of the abuser, namely by not writing him a role at all. The entire dialogue is told from the perspective of 17 women involved in the case.

The final-length version of My Name Is... also received a full production in Monterey at the Pink Flamingo Theatre, and it's scheduled to play there again. Norum is working toward having a full production in SLO County soon and also hopes to distribute the play to colleges.

The play's impact extends far beyond the audience members that it will surely leave a lasting impression on—the proceeds from the staged reading at Studios will benefit RISE SLO, a nonprofit organization that serves victims of intimate partner violence and sexual assault and abuse. The play's production funding comes from Heart to Heart, a Paso Robles-based philanthropic real estate company.

Having handled hundreds of domestic violence cases during his law enforcement career, Norum said he hopes his play will bring awareness to what intimate partner violence looks like so that intervention, prevention, and justice can happen as early as possible.

"Intimate partner violence is rarely one person getting mad one time in their life. The vast majority of time, it takes place over a long time, and there's psychological violence, emotional violence ... just that kind of systematic control," Norum said. "I think people need to be aware of that. If there's someone who's verbally abusive to their spouse or partner in public, that might not be the extent of it." Δ