One hundred years ago, on Aug. 18, 1920, Congress passed the 19th Amendment to the Constitution, extending voting rights to women for the first time in American history.

The fight for women's suffrage took decades—and it didn't end in 1920. Nearly five more decades would pass before Black women earned their right to vote. The fight continues today. 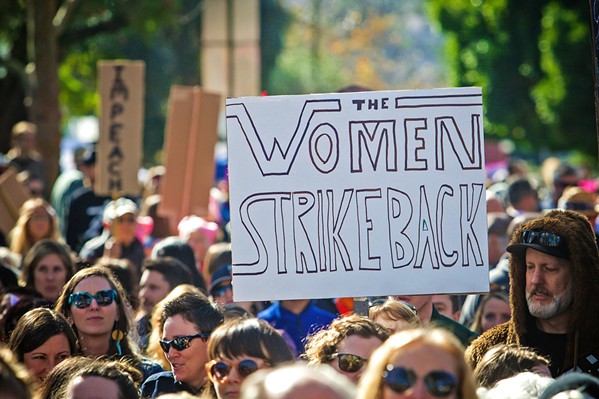 On the centennial anniversary, New Times reached out to women in local office to gather reflections on the progress made over 100 years, and the progress still to go.

• Marlys McPherson, Morro Bay City Council: We need to recognize that before the 19th Amendment was passed, women had virtually no rights. Not only could they not vote, they were almost totally beholden to men.

• Erica Stewart, SLO City Council: I remember researching Susan B. Anthony in elementary school and learning about the dedication and hard work of the suffragists. I imagine what it must've been like to convince men that women are part of "We the People" and should have the right to vote.

• Mariam Shah, Grover Beach City Council: The 100th anniversary reminds us what a short time the women in this country, much less the women of color, have had a voice. That's right around the time my grandmother was born. We still can't say three full generations of women have even had this right.

• Heidi Harmon, SLO mayor: When we were all growing up, we just heard the story of the 19th Amendment and never really had to grapple with the reality that it was only white women. That's a huge difference and an important piece of that conversation.

• Dawn Addis, Morro Bay City Council: I look up to every woman who has taken a chance to use her voice in politics—in the voting booth and in her personal life.

• Debbie Arnold, SLO County supervisor: When I think of extraordinary female political leaders of the past, Margaret Thatcher comes to mind. She became a world leader that influenced women all over the world as the prime minister of the U.K.

• Susan Funk, Atascadero City Council: At this moment, I am feeling special appreciation for my great-grandmother, Mary Ann Warlick Wingfield, who never had the right to vote or run for office, but whose husband was elected many times in their community of rural Kansas homesteaders because people knew that she would do all the work.

• Shah: My mom was my first political inspiration. We grew up supporting candidates and knocking on doors as a family. My mom ran for office several times, but never won.

• Heather Moreno, Atascadero mayor: I am proud that my city of Atascadero's founder, E.G. Lewis, was an early champion for women's right to vote. He and his wife, Mabel, were strong advocates nationally and used their personal resources through his publishing business to encourage women in this effort.

• Stewart: Shirley Chisolm broke barriers in Congress and as a presidential candidate. She was the first Black woman to be elected to Congress. She spoke her mind and stood up for what she believed.

• Andy Pease, SLO City Council: Growing up in California with Dianne Feinstein and Barbara Boxer as our senators, I always felt comfortable that women should be elected to office. Still, I didn't quite have the nerve to run for office until I watched Heidi Harmon run for state Assembly [in 2014]. She knew she had little chance of winning that race, but I saw her campaign shift the conversation.

• Harmon: I'm much more interested in the people coming up behind me—the women who ran in 2018, like Alexandria Ocasio-Cortez, who's doing her role in such an innovative way. This new generation of women feel like we can be our authentic selves, whatever that means for us.

• Shah: I definitely think sexism is still alive in politics.

• Kristen Barneich, Arroyo Grande City Council: When I have a strong opinion, some say I'm being too emotional. When men do this, they are labeled as "strong."

• Stewart: Even in the modern times of 2018, I was still asked what I would do with my children if I won. This question wasn't asked of my male colleagues. There's still an assumption that it's the woman's job to manage the family.

• Addis: In my race, the candidate who put in the least effort and stated that they were not going to bother with campaigning won an important public endorsement. That candidate was a man.

• Barneich: Women as political leaders are different than men. They guide and lead differently. We all have our strengths and weaknesses, but I think a council or board works the best when we have both men and women serving on it.

• Stewart: We are starting to see a trend of women stepping up to run for office. This trend needs to continue. In Congress we have less than 25 percent elected women and about 32 percent in the state Legislature.

• Harmon: It's important to remember that [women's suffragists] got arrested, they made a fuss, they starved themselves at times. They did what it took to get those rights. Nobody really gave them a right to vote. We see similar movement today of people standing up and saying we are worthy, we are worthy for full rights. We're in the middle of another uprising that hopefully will do for people of color what suffragists did for white women. Δ