Photo Courtesy Of Fialta GOOD GRIEF Fialta—Michael Leibovich, Beth Leibovich, Sarah Shotwell, and David Provenzano—just released "Made It This Far," a terrific new track about the difficulty of expressing grief.

About a year ago, when Fialta wrote "Made It This Far," the first single from their upcoming third album, it was to process the loss of a friend, but the track, which was released on April 21, seems to be expressing what we're all feeling right now.

"Time was going gray, you were out of tears/ Don't know what to say, it's been a fucked-up year/ No one bought CDs, Twitter stole your soul/ I ate far too much, but I was never full," they sing on the wistfully beautiful track.

"We wrote 'Made It This Far' a year ago, when a personal friend and her family were grieving an unimaginable tragedy," Sarah Shotwell explained. "The song is about the way that pain silences us—how words often fall short in the face of suffering. It's about feeling helpless and dumb when others are hurting. When we don't know what to say, how can we show our compassion? Should we still try, even when that attempt feels feeble and awkward and thin and incomplete?"

The song goes on to say, "You got drunk to clean, cracked another beer/ While you cursed the dust on all the chandeliers/ I can talk too much, but when I try to pray/ How come I can't think of anything to say?"

"This track was recorded back in July, when we had no idea what was coming, how hard things would get in the world, or how relevant the song would become to us," Shotwell continued. "This week, we lost our own dear friend and former bassist, James Trujillo, and are now grappling with how to mourn during a pandemic. Sometimes, it all feels like too much to take in. This song is our attempt to express our love to everyone during this time. We can't promise that everything's going to be OK, but we continue to be astounded by all the beauty and courage in this world. We have so much to grieve, and we have so much to hope for."

The song's chorus certainly expresses both hope and our collective need to lean on one another in these dark days.

Even the cover art for the new single took on added significance as the reality of COVID-19 become clear.

"A week before our social distancing orders arrived, we, in our blissful ignorance, had a party and took some film photos with friends," Shotwell explained. "It was the last time we got to lounge on the floor and pile on the couch with all our people for a while. The single art for this release is a photo taken that night. We'll be sharing more photos from that evening as we continue to release singles in the lead up to our album, due out sometime this year. For now, we're rolling with the punches, wishing everyone peace, and looking forward to the time when we can be together and play live again."

I'm not sure what the rest of the new album will sound like, but this new track departs from the synth-driven sounds of their second album, Shadow of a Drought. The band's thoughtful musical arrangements remain, this time with acoustic guitars, live strings, hand percussion, and organic vocal harmonies. It's another amazing song from an endlessly creative band that's received more than 2 million plays on Spotify, and has been featured on Nerdist, NPR, and Paste, as well as on the TV shows Parenthood, Atypical, Awkward, and Bojack Horseman.

You can find the single on YouTube, Spotify, and other digital platforms.

Shell Beach singer-songwriter Kevin Graybill, known simply as Graybill, has been streaming live concerts every Thursday, and will continue this Thursday, April 23, from 7 to 8 p.m., on Instagram (@GraybillMusic) and Facebook (Kevin Graybill). 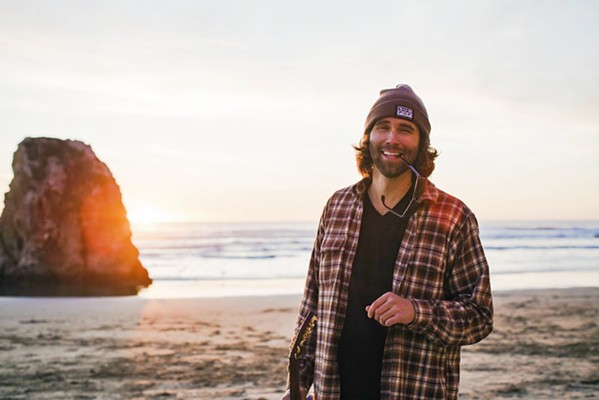 His weekly streams, titled "Thoughtful Thirsty Thursdays," are an hour of music "accompanied by a thoughtful weekly quote and a drink of the week," Graybill explained via email. "I may be sipping on an adult beverage, or an interesting cup of tea ... who knows? But I hope you bring a new drink to share with me each week, too, as you hang out and listen. Cheers!"

Graybill has been compared to Jack Johnson, John Mayer, and Dave Matthews. This is some very thoughtful, comfortable folk—like slipping on your most well-worn pair of jeans. You'll hear both covers and originals. Virtual tip jars include Venmo@Kevin-Graybill; PayPal: Kevin@FullCircleDialogue.com; and Cash App: $KevinGraybill.

"As a conductor, one of my favorite moments is the audience applause after a curtain rises," OperaSLO Artistic and General Director Brian Asher Alhadeff wrote in a letter to OperaSLO supporters and fans. "That welcome interruption to an orchestra in the middle of a heated overture floods artists with delight and validation."

Since that live validation is on hold until the quarantine is lifted, Alhadeff has turned his attention to "creating impactful pieces of online education for children, our Chime-In series, and a few other surprises around the corner."

You can tune in by joining OperaSLO's YouTube channel.

"I am very grateful for the technology of 'livestreaming,' as it does seem to be the best way for us to keep relevant and safely connected during this challenging time. Be safe, happy, stay tuned, and enjoy."

Don't forget that on their Facebook page, the Basin Street Regulars will host a livestream with The Jump Jax this Sunday, April 26, at 2 p.m. If you miss it, the concert will be posted to YouTube afterward. The Jump Jax is a terrific jump blues, swing, soul, and rockabilly quartet that will mix danceable classics and originals. Mark your calendar for upcoming concerts, which will be streamed unless the quarantine is lifted and the shows return to the Pismo Vets Hall: Creole Syncopators (May 31); MarciJean & the Belmont Kings (June 28); Holy Crow Jazz Band (July 26).

I don't know about you, but I'd sure like to jump in a hotrod and head out to hear live music and get a drink! Singer-songwriter Jeffrey Fassino is on the same page with his song and video for "The Buckhorn Bar," available on YouTube.

"Read your column about a shout-out for local sheltering-at-home entertainment content," Fassino emailed. "Here's some written, recorded, shot, and lived on the back roads of SLO County. Enjoy the ride and stay for the Easter eggs in the credits."

Turns out the roadhouse rock track was produced by Creston Line frontman Jon Bartel at his Northwall Studios in Atascadero. The track will make you pine for the open road! And a drink with friends! Δ