The recent U.S. Supreme Court Decision in the case of Janus v. AFSCME, was a blow to the nation's public sector labor unions. But according to Patrick McNamara, it was far from unexpected. 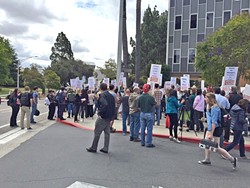 The court's 5-4 ruling on June 27 forbids public sector union's from collecting so-called "fair share" fees from nonunion workers who benefit from the results of collective bargaining. For decades, unions were able to collect those fees from nonunion members, arguing that those employees shouldn't get a "free-ride" by benefiting from the fruits of a union's negotiations and services without paying for them. But the court's majority opinion stated that requiring nonunion employees to pay the fees violated the First Amendment of the U.S. Constitution.

"We conclude that this arrangement violates the free speech rights of nonmembers by compelling them to subsidize private speech on matters of substantial public concern," Justice Samuel A. Alito Jr. wrote for the court's majority.

The decision will have a direct financial impact on public sector unions like SLOCEA, which represents more than 1,700 county employees across multiple departments. Without the ability to collect the fair share fees from nonmembers, McNamara said he anticipates an immediate 8.4 percent drop in the union's revenue. However, he noted that the union already represents a large number of county employees, which may soften the blow of the ruling's impact.

"It's going to be a small dip in revenue," he said. "We are hopeful and don't expect any kind of drastic change."

"We are a very small office and we do a lot with very little," he said. "We are going to direct all our resources toward continuing to provide representation services for our members."

Debra Stakes, president of the Cuesta College Federation of Teachers (CCFT), said her union also tried to prepare for the Janus ruling, which she anticipates will result in a "substantial" loss of monthly income for the organization. She said that the union's executive board is already having discussions about where they might be able to cut the budget. Raising fees for members, however, was not on the table.

"We are certainly not raising our dues," Stakes said. "We are just going to try and get by with less money."

The CCFT's parent organization, the American Federation of Teachers, also committed to not raising dues in the wake of the Janus decision. Shortly after the decision, the union pushed back on the majority's reasoning behind the decision, claiming that the court upended four decades of legal precedent and weaponized the First Amendment to hurt working people.

"This is a dark day for U.S. jurisprudence," American Federation of Teachers President Randi Weingarten said in a written statement. "A day when the thirst for power trampled the need of the communities and people who serve them."

The comments echoed the dissent penned by U.S. Supreme Court Justice Elena Kagan, who wrote that the decision turned the First Amendment "into a sword" to be used "against workaday economic and regulatory policy."

"The First Amendment was meant for better things," Kagan wrote.

Stakes noted that while nonmembers will no longer have to pay fees, they will still get to benefit from the union's services, which include negotiating for raises and benefits as well as representing employees in grievances and disciplinary proceedings. Without those nonmember fees, Stakes said, it would be even more important to make the case to current nonunion staff, as well as new and incoming staff, as to why they should join.

"We will have to make sure that we articulate very clearly what the union provides for them," she said. Δ