"I had a college professor who often quoted the million monkey scenario,” Monkey Room’s protagonist, Joshua Kettermen, tells us early on in his first-person narration. “He said—if you put a million monkeys in a room with a million computers, and let them pound the keys for millions and millions of years, they’d eventually produce the complete works of Shakespeare by dumb luck. I say he wasn’t giving the monkeys enough credit.”

Welcome to the monkey room. Written by Louis Rosenberg—a former Cal Poly professor with a Ph.D. from Stanford in robotics and virtual reality—with artwork by Graeme Howard and lettering by Alice Quist, Monkey Room is a sci-fi graphic thriller where the villains are, sometimes wittingly and sometimes unwittingly, ourselves. It’s a book that unpacks the threat of the mob, increased exponentially by the ever-expanding interconnectivity of the virtual world. In addition to his scientific background, Rosenberg is also a graduate of UCLA’s Professional Program in Screenwriting, positioning him directly between the two poles of technological advancement the book explores—the “mad genius” and mass media. 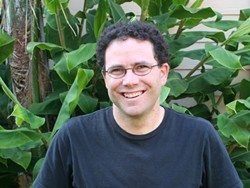 Meet Joshua Kettermen. He’s just your average boy-genius-turned-marketing whiz, living in “a seedy part of San Francisco” (read: the Tenderloin, where his “crappy little apartment” would easily set him back $2k a month), desperately trying to navigate the void that is modern urban living. But what seems like a realistic cityscape turns speculative when Joshua discovers that Verge, his douchy neighbor, is working on “Unum,” a super-intelligent computer program comprised of aggregate user input. “Unum” quickly becomes Joshua’s greatest obsession—that is, his greatest obsession next to Gwen, a sexy stranger he meets in a coffee shop who turns out to be another tenant in his motley building. As Joshua descends further and further into the pursuit of these dual obsessions, the sinister nature of “Unum” is gradually revealed.

The artwork and lettering here aren’t pushing any boundaries—instead, the overall style of the book is telling you “you are reading a sci-fi graphic novel” in no uncertain terms. The purpose of these elements is to blend seamlessly into the canon of such literature in order to more swiftly and effectively deliver the main focal element of Monkey Room, its story. The very spare use of color could have been gimmicky, but it also manages to blend into the narrative in order to do its job.

The characters, too, seem to fulfill classic genre roles—the disillusioned protagonist threatening to become anti-hero, the femme fatale whose intellectual and psychological power is inextricably linked to her physical appearance, the oracle or sibyl figure(s) complete with the “other” status of foreign birth and accented dialogue. As with so many protagonists—both reliable and unreliable—in literature, Joshua Ketterman’s soul is this book, and the “monkey room” is his “room of one’s own.”

It’s hard not to see Joshua Ketterman as a bizarro-world Rosenberg, an alter ego living out the author’s dystopic anti-fantasy. I won’t give it away, but there’s a seismic plot shift in the 11th hour of the book, one that even more strongly suggests Ketterman as a manifestation of Rosenberg’s id, acting out destructive impulses that stand in for risky creative/career choices the author has made in his own life. The energy of these personal ambitions and transformations animates Monkey Room, albeit in a far more dangerous way than it seems to have done in real life.

Does this mean we can expect a graphic memoir from Rosenberg next, a cross between Marjane Satrapi’s deft and heartfelt Persepolis and the masterfully intelligent graphic bio of Bertrand Russell, Logicomix? Leave the doctor in a room with just one of those million computers, and I bet it won’t even take him a million years. Rosenberg’s writing isn’t dumb luck.

Arts Editor Erin C. Messer pounds the keys at emesser@newtimesslo.com. So far, she has not produced the complete works of Shakespeare.