The San Luis Obispo County clerk-recorder paid a visit to the Republican Party of SLO County headquarters in Atascadero on Oct. 14 to "clarify" with party officials the procedures for lawfully collecting ballots and submitting them on behalf of voters.

Clerk-Recorder Tommy Gong's visit occurred a day after news broke that the California Republican Party had distributed its own ballot drop boxes throughout the state, competing with official ballot drop boxes. 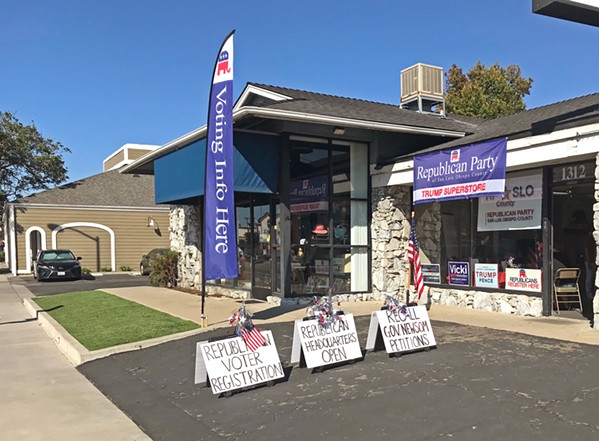 Some of these boxes are made of metal, with an "official ballot drop box" label, and located unsupervised outdoors. California election officials said on Oct. 12 that the partisan boxes violated election law—though Republican Party leaders disagreed.

Since ballots hit SLO County mailboxes this month, the local Republican Party has advertised its two offices in Atascadero and Arroyo Grande as places where voters can drop off their ballots.

While election law allows third parties to submit ballots on behalf of voters with their approval, specific procedures must be followed—procedures that Gong went over with party officials on Oct. 14.

"We reviewed what the proper process is," Gong told New Times. "I clarified that there is to be no ballot drop box located in the building where the voter can just drop it off. The backside [of the envelope] has to be completed when a voter is giving it to them."

According to one local voter who visited the Arroyo Grande office, the Republican Party appeared to be abiding by some of the rules but not others.

When Grover Beach resident Krista Jeffries walked into the party's office on Oct. 8, it was staffed by three or four workers, none of whom were wearing masks, she said. One staffer helped Jeffries through the ballot submittal process, which included scanning her ballot envelope and then Jeffries dropping the ballot into a drop box.

At the end of each day, party officials reportedly deliver the ballots in the drop box to the SLO County Clerk's Office.

"I was honestly just curious," Jeffries, who's not a Republican, told New Times about her submitting her ballot through the party's office. "I decided to test this system, before news broke out that the entire state party was under fire."

In a phone call later on Oct. 8 with the Republican offices, Jeffries inquired further about the ballot submittal process, recording the conversation and posting it to social media.

In the video, a Republican office staff member in Arroyo Grande is heard telling Jeffries that her ballot envelope had been scanned "to prove we accepted your ballot" and then explained that the party was choosing not to sign the required third-party authorization section on the back of the ballot envelopes, because "we don't want to flag anything" at the Clerk-Recorder's Office.

"We decided not to have the person who picks the ballots up and takes them into the county recorder's office—we decided it'd be better if they did not sign it," the staff member tells Jeffries. "Because it's the same person every day taking all these Republican votes in ... we thought it'd be better just to leave it as if you just dropped your ballot off at the recorder's office, without anybody else in between. We're doing everything legitimate and everything perfectly correct, but it's just there's so much fraudulent stuff going on now and they're always watching out for everything Republican. We don't want it to become an issue."

According to the California Secretary of State's website, third parties who deliver ballots on behalf of voters "must fill out the authorization section found on the outside of your ballot envelope ... in order for [a] ballot to be counted."

In response to the Republican office's statements, Gong told New Times that his office would still accept those ballots even without the authorization signature. He said it's his job to liberally construe election law in favor of the voter.

"I won't penalize the voter," Gong said. "As long as their signature compares, I will accept it."

Gong noted that his office had been in touch with the Republican Party prior to ballots going out to voters about its intent to collect ballots at their offices. He said that the rules were explained to party officials at the time, but added that election laws are changing rapidly and are not always easy to understand.

"We did indicate to them that that section has to be completed when the voter drops them off," he said. "But that law allowing people to return ballots on behalf of the voter, that's a relatively recent piece of legislation. I'm not blaming anyone. It is a new learning process."

Republican Party of SLO County representatives did not return a New Times request for comment before press time. As of Oct. 14, the party's website no longer advertised its offices as ballot drop-off locations. Δ