Several months deep into the COVID-19 pandemic, Brandon Cruz decided to take a leap in August 2020, accepting a position as a long-term substitute teacher in the Lucia Mar Unified School District.

Cases of COVID-19 had just ramped up again locally, and most local school districts had accepted that much of the 2020 school year would have to be conducted virtually. Cruz had subbed here and there in 2017 before becoming an instructional assistant. But as a long-term physical education substitute for both Oceano and Ocean View elementary schools, he'd have total responsibility for around 100 kids for the first time. If that wasn't overwhelming enough, he'd also have to develop an entirely new physical education curriculum geared toward online learning.

"It was quite the experience, but we managed to make it work," Cruz told New Times. 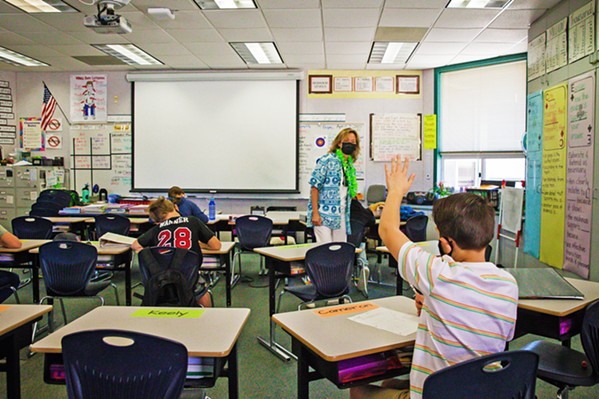 Although he'd already practiced using Google Classroom prior to the pandemic, Cruz said actually keeping track of his students and keeping them on task in online classes turned out to be more challenging than expected. Then, when Cruz was asked to return to campus for some limited in-person instruction in January of this year, he was faced with another pandemic dilemma. Vaccines weren't readily available yet, and Cruz wasn't sure it was safe to return to school.

"I was hesitant for sure," he said.

Cruz said he understands why so few people are substitute teaching right now, but with so many teachers out sick or in quarantine after potential exposure, he hopes things turn around soon.

"I think the substitute teacher right now is a vital position," Cruz said. "We need people available to step in when teachers need coverage."

In normal times, subbing requires a lot of flexibility, patience, and some acceptance of uncertainty. Every classroom and child is different, and so is every day in the life of a sub. Attracting individuals willing to face those challenges has long been a barrier for local school districts. COVID-19 only made things harder.

Attempting to attract more workers, school districts throughout the county recently increased wages for subs by anywhere from $20 to $50 a day for the remaining school year.

At a meeting on Feb. 23, the Paso Robles Joint Unified School District bumped its pay up from $121 a day to $161 for short-term subs willing to teach in-person classes, and from $136 to $176 a day for those working long-term.

"Currently we only have 18 people who are willing to do in-person substitute jobs," Deputy Superintendent of Human Resources Jennifer Gaviola said at the meeting. "We currently have nine of those filled with long-term positions already, which means on any given day, for over 300 teachers, we only have nine available substitutes for in-person. So it is definitely a need for recruitment."

Schools across California are having similar difficulties.

Between 2019 and 2020, the number of substitute teaching credentials issued statewide dropped by about 25 percent, according to data collected by the California Commission on Teacher Credentialing. In 2018, the state issued more than 65,000 substitute teaching permits, including those needed for just 30 days of subbing, for career substitutes, and permits for substitutes who are on track to becoming teachers. That number hovered around 65,000 again in 2019, according to the Commission on Teacher Credentialing, then fell to 48,763 in 2020.

"Substitutes is one that has never been super easy to fill," Newlon told New Times. "There are even fewer than there have ever been before."

Despite San Luis Coastal's paid tech trainings at the beginning of the pandemic, early access to vaccines for anyone working in education, a recently approved pay increase for substitute teachers, and high unemployment rates throughout the COVID-19 pandemic, Newlon said the district is still struggling to find people willing to do the work.

Fortunately for the district, Newlon said there have been fewer teacher absences to fill since the pandemic hit in the spring of 2020. Distance learning has allowed teachers who might be mildly sick, who might have once stayed home, to continue teaching virtually. Teachers who might have taken a day off to wait for a plumber at home or care for an ill parent or child can still work through the distance-learning model.

But as more teachers get their vaccines, Newlon said more are calling in sick with the flu-like side effects that sometimes come with the shots.

"We had a lot of people who were anticipating being sick due to their second shot," she told New Times, "or they really were sick, so we knew we were going to be short-subbed today."

Lucia Mar approved a pay increase for its substitute teachers at a board of education meeting in March. A district spokesperson said that while the district would normally have a pool of around 150 credentialed subs, more than 100 of those became inactive this school year. Now the district has just around 25 fully permitted substitutes to work with.

Cody King is a physical education teacher at Nipomo High School and serves as president of the Lucia Mar Unified Teachers Association. He said that those few substitutes simply can't cover all the absences left by Lucia Mar's more than 500 teachers.

"It's definitely an ongoing problem," King said. "But how bad it is has been shocking this year."

Without an adequate sub pool, schools have to get creative. Intervention teachers, who usually help kids catch up in subjects and classes they're struggling with, often have to cancel their services to cover for absent teachers. Administrators are also sometimes called upon to act as substitutes, forcing them to drop their usual workloads.

In junior high and high schools like King's, where classes run on a periodical schedule, he said teachers can cover for each other by forfeiting their prep periods, time that's usually used to grade assignments or plan lessons. It's a good way to make a little extra money, but King said it's becoming such a common crutch that most teachers would choose actual preparation time over extra cash.

King regularly uses his own prep periods to fill in for other teachers, and he said that even after a year of distance learning, the variations in tech setups between classrooms can be tough to adjust to. For subs, especially those without much experience, it's even harder.

The pay spike will probably help some, but King said he expects more subs to come on board as more people get vaccinated.

"We're hopeful that—this has been kind of a chronic problem—so we're hopeful that next year, when things are more on the normal side, we'll be able to have subs available when we need them," he said. Δ