Moonshiner Collective frontman Dan Curcio has a super soulful voice—distinctive but with hints of Ben Harper and Dave Matthews. He's also a whopping good songwriter. "Autumness" from 2013 still lights my fire every time I hear it on the radio. I'm always eager to hear his newest, and the three-song EP Galactic Sailors does not disappoint. It's the first installment of three EPs that will combine to form the next Moonshiner Collective full-length album.

"We're gonna do an 'unplugged' style set with more intimate songs and then an 'electric' set with our full band electric approach," Curcio explained. "We're really excited for this format to be able to properly showcase the different sides of who we are."

The first EP installment is available now on Spotify, Apple Music, Amazon, Tidal, iTunes, and Pandora, with "the next two releases to happen over the next five months or so," Curcio continued. "These new songs explore our relationship to the metaphysical and reincarnation, our need to disconnect from the information overload that life tends to throw at us, and our desire to be and feel seen and appreciated by others.

"We recorded these songs at our home studio, When It Hits Records, with Tyson Leonard (Alan Parsons Project, TROPO) handling the engineering and mastering. 'Start Again' and 'Lose Our Minds' were both recorded live in the room together, and Gary Wooten—on eight-string hybrid bass guitar—played these tasteful basslines and guitar parts simultaneously as he always does live. If you listen to the quality of each part and realize that's one guy doing both at the same time, I think it's absolutely mind-blowing and worth the price of admission alone."

In addition to Wooton and Curcio (vocals, guitar, piano), the band also includes Ryan House on drums and percussion, and Leonard on violin and mandolin.

"The overall caliber of this lineup both musically and personalities is something I've been working toward my entire career, and even after all these many years of insane amounts of work, it truly feels like it was all for what we have now. We're just getting started," Curcio added.

If you want to go, buy tickets now. As Curcio noted, "We've sold out eight shows in the nine months since we've been back at it, so make sure to buy tickets in advance if you can. We're putting in the work to make this our best show yet."

Also at SLO Brew Rock this week, check out retro-indie-soul act The Altons on Friday, March 11 (7 p.m.; 18-and-over; $18 plus fees presale at ticketweb.com or $22 day of show). Emerging from the fertile LA soul scene, the band captured the attention of Daptone Records co-founder Gabe Roth, who signed the band to Penrose Records, a subsidiary label to Daptone. 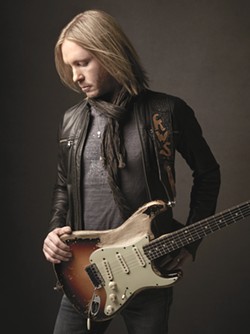 Blues-infused rockers the Kenny Wayne Shepherd Band play the Fremont Theater on Sunday, March 13 (doors at 7 p.m.; all ages; $40.50 plus fees presale at seetickets.us). Shepherd taught himself guitar starting at age 7 after meeting Stevie Ray Vaughan. Blues musician Bryan Lee invited a then 13-year-old Shepherd to play onstage, which launched his recording career. The wunderkind had arrived, releasing his platinum-selling debut Ledbetter Heights in 1995, and never looking back. He's sold millions of records worldwide, been nominated for a Grammy Award five times. He's had seven No. 1 blues albums and a string of No. 1 mainstream rock singles.

Good Medicine and Numbskull present Corb Lund and the Hurtin' Albertans on their Back to the Barrooms tour at The Siren on Sunday, March 13 (7 p.m.; 21-and-older; $18 plus fees presale at eventbrite.com or $20 at the door). Lauren Morrow will open the show.

Lund, a Canadian country and western singer, has nine albums under his belt, three of which are certified gold sellers. He's also a multiple Juno Award nominee and winner for his 2006 album Hair in My Eyes Like a Highland Steer.

He's no urban cowboy, having grown up on his family farm and ranches, which he left to study jazz guitar and bass at Grant MacEwan College. Now he and his band tour regularly through Canada, the U.S., and Australia.

Also at The Siren, The Lil Smokies play a Good Medicine and Numbskull show on Wednesday, March 16 (7 p.m.; 21-and-older; $20 plus fees presale at eventbrite.com or $25 at the door). The Michigan Rattlers will open.

The Lil Smokies have that '70s Laurel Canyon vibe, and according to press materials, they're "reimagining their approach to roots music on [their new album] Tornillo, named for the remote Texas town where the album was recorded." Produced by Bill Reynolds (The Avett Brothers, Band of Horses), Tornillo is the third studio album for the Missoula, Montana, band.

Michigan Rattlers open. The band consists of "lifelong friends and deep-north natives" who "play heavy-hearted folk-rock with an aching dose of Midwestern nice."

MRG Live presents Liza Anne on Friday, March 11, at the SLO Guild Hall (8 p.m.; 21-and-older; $18 presale at admitone.com/events/liza-anne-slo-7930357). She's touring in support of Bad Vacation, which according to promotional materials "hasn't just shaped her liberation, she's completely reinvented it. The record is defiant and thoughtful, showcasing a remarkable confidence as it tackles destructive habits and finds Liza at her most self-aware."

The energetic pop tracks are quirky and sung with a tongue-in-cheek bravado and a healthy dose of nerd rock. To get a taste, check out her online video for the title track on YouTube. Δ