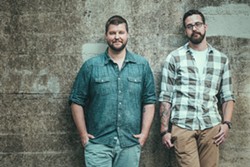 “We’ve been fine tuning a live show experience that combines the raw energy of The Black Keys with the soulful depth of Ben Harper and The Avett Brothers, but is a unique experience all its own,” Curcio said.

The duo will be joined on stage with collaborators Nick Bilich (formerly of Still Time) on guitar, Chris Beland on guitar and vocal harmonies, and Daniel Cimo
on violin.

“The best times I’ve had playing music have always been centered around a communal jam aspect where everyone is free to be themselves and add their own unique style,” Curcio added. “We had this with Still Time and I feel extremely fortunate to see this happening again. The connection I have with Ryan is something I’ve been missing since Still Time, and it’s definitely the foundation of a great band. Just being completely on the same wavelength and having a genuinely good friendship with him I think translates to a transcendent and great music experience for the audience and us. Our goal is to lift people up in a huge way, and we have the creative energy and great connection between us to be able to
do that.”

After Still Time came to a close, Curcio’s need to reevaluate led him back to Bob Dylan’s song “Moonshiner,” which helped to solidify his moniker: “I’ve been conflicted for a while now about the journey of the close-to-home family man vs. the road-worn, whiskey-drinking troubadour, and I have a place in my heart for both. This name [Moonshiner Collective] represents the combination of these two lifestyles with Moonshiner representing that ramblin’ troubadour path and the Collective aspect speaking to a feeling of family, community, and all inclusiveness,” he said.

According to his press materials, his “Collective” is “designed to be a revolving door of creative perspectives, as it trades talented musicians in and out; with Curcio’s soothing vocals and introspective lyrics serving as the backbone.”

Opening acts are local favorites Jade Jackson (who is currently working on a new album with Mike Ness of Social Distortion) and recent Pacific Northwest transplant singer-songwriter Chris Beland who will also be joining Moonshiner Collective during their set.

“Hi! I’m Stephen Styles and I write Country songs because it’s cheaper than paying to sit on a therapy couch,” he said in his bio. “No, but seriously, I love music and look forward to keeping in touch with you guys here!”

Callie Bobsin will open. She’s a real country gal who grew up on a grain and cattle ranch.

“From riding horses and performing in events such as team roping, to helping her dad work on the ranch, she is an authentic country girl,” her bio said. “Starting at a young age, Callie would sing the national anthem wherever she could, from school events to rodeos. At age 17, she learned to play the guitar, which opened up a whole new world of songwriting. You can now find her newly released debut EP On My Way at any online music retailer such as iTunes, Amazon, CD Baby, Rhapsody, and Spotify.”

It’s easy to take the Songwriters at Play series for granted. After all, week after week, month after month, and year after year, it’s been there, bringing great, usually free, entertainment to venues throughout the county. Some weeks I have space to tell you about what they’re doing; some weeks I don’t. Every week it’s worth your time to visit their website, songwritersatplay.com, and see what’s going on.

This week they kick off the series with acoustic rocker Chi McLean headlining the showcase at Shell Café on Thursday, June 26 (6:30 p.m., all ages; free). With flashy guitar work and soulful vocals, this singer-songwriter’s material is influenced by the likes of The Allman Brothers, Jimi Hendrix, The Black Crowes, Free, and The Faces. As usual, a variety of other artists (including Amie Richie and Craig McNichols) will play short four-song sets before and after a longer set by McLean. Though there’s no cover, a tip bucket is passed during the featured artist’s set and the money goes to him or her. This regular Thursday showcase is a co-production with Madeline Royal of Love Live Music and Songwriters at Play producers Steve Key and his wife Bonnie Nelson-Key.

On Sunday, June 29, at Sculpterra Winery (1 p.m.; all ages; free), Jody Mulgrew will perform selections off his band The Skeleton Crew’s excellent new album Let Them Talk. Just released a couple of weeks ago, the first pressing has already sold out (Don’t worry! Electronic downloads are available if you can’t wait for the second pressing!) as did both of their CD release shows. Mulgrew, who grew up in Los Osos and attended Morro Bay High School and Cuesta College, recently moved to Nashville but returned home to play with the Skeleton Crew for their release shows. After this solo set, he’ll be back in Tennessee, so catch him while you can, and request some songs off of his award winning solo CD Rocket Ship, which won Album of the Year a couple years ago during the New Times Music Awards. Guest artists will include Lost Hills (who also plays at Linnaea’s Café on Saturday, June 28, from 8 to 10 p.m.), Evan Brown, Erin Inglish, and Ray Duncan.

Keep on keepin’ on, Songwriters at Play!

Matt’s Music starts its Back Yard Music Circle this Thursday, June 26, from 6 to 8 p.m. (the backyard opens at 5:30 p.m.; admission is $5). Bring lawn chairs or blankets and your musical instrument(s)—guitar, egg shaker, mandolin, flute, bagpipes … almost anything!. Bring a picnic dinner. Bring family and friends. Most importantly, use your restroom before you leave home because there are no facilities on site! “A core group of musicians will provide the foundation and fundamental music,” organizers said. “This will allow musicians of ALL levels to participate in one way or another, and that is the ‘Circle’ part. Musicians may be invited to join the core group on stage depending on their comfort level. Whether you started playing your instrument today, have been playing for 30 years, or you just want to listen to some great music, get up, get out, and have some fun! Call 237-0054 for more info or stop by the store.”

Contemporary jazz artists the Andrew Endres Collective, an instrumental trio from Portland, has a modern sound and sophisticated interplay, and lists indie, jazz, and math as its genres. “The collective plays adaptations of the standard repertoire as well as original compositions that are tastefully crafted and thoroughly composed,” according to their press materials. “The music lends itself to mellow interludes and motives to driving emotive solos and soaring melodic lines.” Enders is both a gifted guitarist and composer, and contemporary jazz fans will want to catch this rising star’s act! See them at Linnaea’s Café at 8 p.m. on Thursday, June 26.
Blues act Dr. Danger plays D’Anbino’s this Friday, June 27, from 7:30 to 10 p.m., bringing their “soulful blues-based rock tradition going back to its roots in Chicago blues and forward to the sound of the Bay Area in the ’60s and ’70s; fluent in the blues, ballads, honky-tonk, doo-wop, psychedelia, and more, a typical show will feature a healthy mix of favorites from Canned Heat to Deep Purple, from Merle Haggard to Bill Withers to the Rayettes to the Grateful Dead as well as plenty of original material along the way.” Now celebrating their seventh year together, this is a great, tight, fun band to watch. Admission is $10 ($5 Club Members). Call 227-6800 for reservations.

“Summer is here and music is being made!” gushed my favorite local chanteuse and singer-songwriter Inga Swearingen. “My two favorite brothers are returning to San Luis Obispo from Santa Fe, New Mexico. We’ll do a little trio configuration to open up the night, and then Round Mountain will play tunes from their latest album The Goat.” This Friday, June 27, at the Steynberg Gallery (8 p.m.; all ages; $15), hear Inga with Char and Robby Rothschild of Round Mountain before they launch into a set of their own. The Americana duo has traveled the world absorbing other musical cultures, which they’ve infused in their dusty folk style.

Great Spirit, a Bay Area-based funk-infused folk band, plays Frog and Peach this Saturday, June 28. “Continuing our exploration of the musical cosmos, we’ll be headed to SLO for the funkiest, most kosmic night of music the Central Coast has ever seen,” the band said. The show starts at 10 p.m. and is 21 and older.

This Sunday, June 29, The Central Coast Jazz Institute in collaboration with the Famous Jazz Artist Series presents its student of the year, guitarist Josh Collins, in concert at the D’Anbino Wine Tasting Room in Paso Robles. He’ll be accompanied by bassist Luther Hughes and series co-producers Charlie and Sandi Shoemake (vibraphone and vocals) during two performances, a 4 p.m. and 7:15 p.m. The cost is $15 each, or see both for $20. Call 927-0567 for reservations. 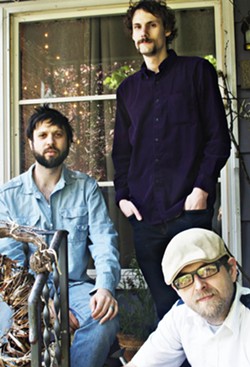 Eugene, Oregon-based musicians the Robert Meade Trio will play the Frog and Peach on Sunday, June 29. Meade has toured with Floater, Robert Schwartzman, and Weezer guitarist Brian Bell. He’s also appeared at festivals such as at SXSW 2011 and the Sundance Film Festival for the past three years. According to his press materials, The Beach Boys’ guitarist Al Jardine has praised his Americana style. I recently heard his single “Stranger” that came across as more of an alt-blues rock tune. Of his music, Meade notes, “These songs are a representation of where I am today. I feel them most at live performances, and I hope they speak well to the audience. Like every human experience, I am on a journey of ebbs and flows as a songwriter. I want to portray those emotions through lyrics and melody as honestly as I can. The process has been very therapeutic.”

You can enter up to three original songs in each of the following categories: country/Americana/folk; R&B/blues; rock/alternative; hip-hop; and open (reggae, world beat, jazz, classical, klezmer, kazoo orchestras, whatever!). You may also enter up to three original songs in the songwriting competition (lyrics must be included). And you may enter one album released between July 2013 and July 2014 for the album of the year category.

Each song or album entry costs $10. Enter online, or fill out the entry form located on page 5 of this issue and drop off or mail your submission to our offices at 1010 Marsh Street.

First place winners must be available to play Thursday, Aug. 28 at SLO Brew. Submission deadline is Monday, July 7 at 5 p.m.