The U.S. Supreme Court heard arguments against the Obama-era Deferred Action for Childhood Arrivals (DACA) program on Nov. 12, and while no decision has been made, the court indicated it might allow the current administration to end it. In the wake of the hearing, local higher educational institutions continue to support the DACA community.

Cal Poly Dream Center Coordinator Katherine Zevallos Pastor said in an emailed statement to New Times that the center acknowledges the anxiety, stress, and worry the local undocumented community is experiencing during these times. 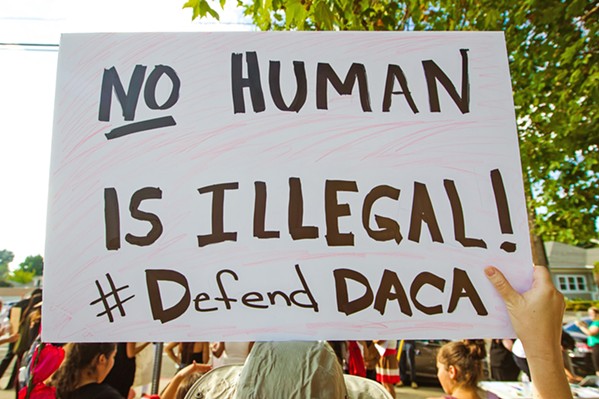 "We reiterate our commitment to all undocumented students, those with or without DACA, and remind them that they belong at Cal Poly," Pastor said. "We encourage all allies to recognize the additional personal challenges and stress that can manifest for undocumented individuals during this time, and we want our campus community to know that our Dream Center is a resource for those who need support."

The CSU board of trustees and the Presidents' Alliance on Higher Education and Immigration, made up of American college and university leaders, joined more than 165 colleges and universities throughout the country in signing an amicus brief in the case before the Supreme Court.

Cal Poly and Cuesta College are both members of the Presidents' Alliance.

The "friend-of-the-court" brief filed on Oct. 4 by Perkins Coie LLP, which has an office in Washington, D.C., stated the positive effects DACA had on college campuses as well as testimonials from current and past DACA students.

"They have worked and studied in American schools; have prepared and trained for all manner of careers; and have strived to innovate, achieve, and serve their communities," the brief states.

The Central Coast Coalition for Undocumented Student Success sent out a call for action urging Central Coast colleges, universities, and K-12 administrators to formally issue a public statement reaffirming their support of DACA, continue to assist eligible program recipients to renew their DACA, and identify funding sources to assist with renewal fees.

"In the event that DACA is terminated, we urge all Central Coast colleges, universities, and K-12 leadership to rapidly create formal action plans to ensure affected students are able to continue their education without interruption, and specifically address the financial and mental health needs and impacts caused by DACA termination," coalition officials stated.

On Nov. 8, the current administration proposed an increase in immigration fees—including DACA renewal requests, which would go from $495 to $765. Δ