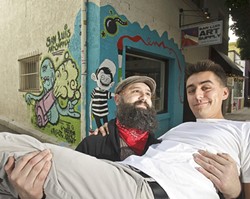 On the morning of March 4, San Luis Art Supply owner Neal Breton sat shoulder to shoulder with fellow San Luis Obispo downtown business owners at the Downtown Association’s annual Beautification Awards ceremony. He was there to receive an award—which honors businesses that have enhanced the downtown area—on behalf of his Marsh Street shop, which sports a splashy, explosive mural.

But the real winners of the award, Breton freely admits, are the artists: Julian Small Calvillo, who painted a maniacally grinning, paintbrush-wielding inmate; and Nic Rodriguez, aka notorious tagger PILO, whose pyrotechnically inclined blue monster graces the left side of the shop.

As the winners were announced, an image of their beautified storefront displayed in a PowerPoint presentation. To Breton’s dismay, the photo used of his shop was head-on, as if purposefully excluding Rodriguez’s half of the artwork.

Rodriguez, a onetime local, had a rough relationship with SLO cops. Though he was part of several legitimate public art projects and sold his art online, the graffiti artist’s tagger name PILO had a nasty habit of appearing in places it probably shouldn’t. Police used his website to link him to incidents of vandalism around town. He was arrested in spring 2009. His home was raided, and his art supplies were confiscated. The raid was the first of several, and the artist credits himself with prompting the local graffiti task force.

The artist, who still pays restitution, moved to Oakland, where he now works under the “more professional” moniker Pig Lizard. Breton, a fan of Rodriguez’s style, paid him to come down to SLO to paint the outside of his shop.

“I commissioned him as an established member of the community,” Breton told New Times. “He’s got such an eye for color, it’s uncanny. I think artists dream of having what Nic has.”

When Rodriguez heard of the award, he said, “I cracked up laughing; it was hilarious … I got run out of that town!”

Rodriguez doesn’t think the store would have received the award had the committee been aware of his alter ego.

“I’m surprised they don’t put two and two together,” he said, noting that his tagger moniker is included in the store’s painting.

Downtown Association Administrative Assistant Brent Vanderhoof told New Times that while the Beautification Awards committee wasn’t aware of the artist’s identity, this knowledge would have had no bearing on SLO Art Supply’s award.

Asked why Rodriguez’s artwork wasn’t featured during the awards ceremony, Vanderhoof cited a possibly difficult camera angle. When New Times suggested that the association was merely avoiding glorifying an artist who turned out to be a known tagger, Vanderhoof replied, “You’re reading way too much into that.”