The holidays. Let’s all take a moment to heat up a cup of cocoa, snuggle into our comfiest chair, relax, and sigh collectively.

These are taxing times for all.

Try as you might to escape the frozen shackles of peppermint cheer, the feral throngs of last-minute shoppers, or the deafening silence of awkward family dinners, you can’t. Everywhere you turn your knit-capped head, there’s another wreath next to another Starbucks next to another wreath next to a Peet’s. All in all, the scene’s beginning to grow a bit tiresome, a bit too detached, and a bit generic.

This is the part where I do my best Andy Rooney impression.

Some of my fonder childhood memories of Christmas on the Central Coast include the dentist’s office. Sure, one of those reasons was due to the paralyzing fear their medieval drilling instruments instilled in me. But there was another, more festive reason.

On the windows of that office, in brilliant colors and bold outlines, were these gleaming figures of cheery reindeers, jolly Santas, and merry snowmen. Occasionally, there would even be a playful scene, of teeth dolled up in seasonal garb (molars with mittens; canines in Santa caps). Those images stuck with me. They were imaginative, unique, and clearly handcrafted with the utmost care. But, sadly, those images don’t seem as common anymore.

David Middlecamp, senior photographer at the The Tribune, appears to have been struck by the same nostalgic yearning when he posted an article from their archive about local window painters last winter. In his short preface, he laments:

“Checking the phone book, I found almost 40 listings for window cleaners, but I couldn’t find one for window painters, though I know they still exist.”

He then continues to introduce the reporter and subject, but right before the actual article begins, there’s a melancholy note. Window painters are listed as “an endangered species.”

Endangered? Was this true? Are window painters on the same plane as the African wild ass and the American journalist?

“I suppose we are a dying breed,” remarked Marilyn Seim, a longtime, local window painter here on the Central Coast.

You’re probably familiar with Seim’s work. If you’ve ever driven past Donna’s Interiors in Arroyo Grande, the Animal Kingdom Pet Shop in Grover Beach, or the Harley Davidson dealership in Santa Maria, those bright letters and vivid scenes on the windows are hers.

Since 1974, she’s been one of the premiere painters of storefronts windows, banner signs, murals, and all manner of art and advertising throughout the county. It’s an unexpected calling that began when Seim and her husband moved to the Central Coast more than 40 years ago.

“I had my degree in art from UCSB and had not a clue what to do with it,” she said. “I was working at what is now the Heritage Oaks Bank, used to be Security Pacific Bank, downtown, and they had me paint the windows for Christmas. I thought, ‘I don’t know how to do that. Figure it out. You have an art degree.’ So, I did it from the inside—I don’t do that anymore—and every year, they had me paint their windows. And I loved it.”

She soon quit the bank and hasn’t looked back since. All year round, she’s outside, from sunup to sundown, with a ladder and a paintbrush. During the holidays, when business for window painting reaches its peak, she estimates that she paints around 70-75 windows. She rarely makes sketches, and she doesn’t rely on the same images from year to year. For her, window painting is like any other form of art. It’s “intuitive” and, especially during the holidays, it’s creatively freeing despite the fact that the underlying function of window painting is to advertise. 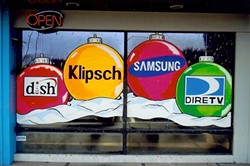 “Window painting is more artistic,” she noted. “Because you can change it, I think that’s some of the appeal. It’s bright and eye-catching, and so I think that’s why I still keep busy. … Sometimes, it’s like, ‘OK, there’s another sale. How can I make that S-A-L-E look really interesting?’ Yeah, that’s where the challenge is.”

There’s something old-fashioned and craftsmanlike about window painting. It’s not only a creative exercise, but a deeply personal and community-based one. It’s the local, mom-and-pop businesses—your furniture stores, cafés, and pet shops—that have become the primary clientele for window painting over the past few years. In the face of chain store sprawl, these custom paintings directly contrast the stark, uniform look of corporate graphics. In fact, you can almost map the influx of brand name retailers to the prevalence—or lack thereof—of window painting in that area.

“SLO is not painting as much,” Seim said. “I don’t know why. I’m busier in Arroyo Grande and Santa Maria has picked up a lot. It [window painting] can be garish. They’re bright and neon. I understand that. I thought that is probably why they want to maintain a certain look in downtown SLO. They want to have a more refined, upscale look. And also, a lot of your places like malls don’t allow window painting. Chain stores, Cost Plus—all those different stores, they just don’t do window painting. They have the same Christmas decorations for all their stores. I think that makes a big difference. Corporate stores make it the same as everybody else. It’s not unique anymore. It’s nice if you want to go shopping, but we’ve lost a lot of our uniqueness.”

He knows Seim. Local window painters tend to be a small club, and he’s been painting storefronts on the Central Coast for more than 20 years. He’s not only seen the ebb and flow of the small business world, but that of the window painting business as well. And the atmosphere has most definitely changed.

“There are gaps now that I didn’t have before,” he said. “People are more tight with their money. … Cities are trying to make you look uniform. In LA, they even make the Target sign brown to match the look of the neighborhood. Mom and pop stores can’t afford that. This [window painting] still helps them out.” 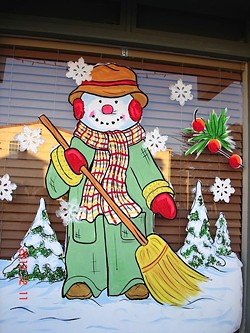 Like Seim, Loney didn’t intend to be a window painter as a kid.

“I wanted to be the next Walt Disney,” he said.

He grew up in Los Angeles, doodling cartoons and learning techniques from Ben Washam, a prominent cartoonist at Warner Bros. who animated Bugs Bunny for a time. But animation didn’t stick. Instead, Loney became involved in the emerging, 1970s subculture of van murals. There, he was able to exercise his artistic talent, personalizing vans with painted cartoons of Yosemite Sam and Tweety Bird. From there, it was a natural progression. Out of vans, he got into custom t-shirts, drag boats, and racecars. Windows, it seems, are the last hold out from this once popular expression of personalized painting.

As Loney put it, “There are window painters, but you have to beat the trees a lot more now.”

The reasons for this decline vary. As mentioned, there’s the increase in corporate businesses that prefer standardized, computerized graphics. But Loney also cites obscure city laws in SLO that sometimes make it difficult for independent stores to alter their appearance.

“Technically what I do,” he said, “when I put something on a building, that’s under freedom of speech.”

Like Seim, Loney imbues this kind of freedom into his window creations. He doesn’t use sketches; he makes his paint from a mixture of water-based pictorial paints and the cell paints animators would use when animation was still eked out by hand. He prides himself on his specialty for “subtle things” like certain highlights, blends of color, lettering shadows, and engaging concepts that draw a passing eye toward the store.

“Each painting depends. It could be a week at the longest, a day, or a couple of hours. I put a white base on, maybe rough it out with a china marker. I incorporate different ideas, like cartoons, and push myself to see if I have an artistic talent left,” he said.

You can tell, when you see him paint and hear him talk, that he’s constantly abuzz with potential ideas. When this article was being written, he was working on a video storefront near the Smart n’ Final in Arroyo Grande. Run by sister-in-laws Sara and Sarah (Sarah Squared, they joke), it’s called Way Back Video—a fitting name to a throwback era that valued personal interactions in the same way window painting encourages personal customizations.

For the sign, Loney admits he “cheated on an idea.” He took the “Back” part of their name and ran with it, painting the letters in the style of everyone’s favorite DeLorean-based time travel flick—Back to the Future. It’s funny, it’s eye-catching, and it conveys what the flat message of a Starbucks “Chestnut Praline Frappalattemocha” window sticker can’t—an actual human personality.

When you call Loney’s office phone, the outgoing message begins normally and then the voice dips low into a 1940s patter.

“Of all the answering machines in all the gin joints in all the towns in the world, you had to call this one.”

He’s a funny guy, and you can see that in his work. Whether it’s a movie pun on a storefront, a Santa playing golf, or a hyper-accurate rendering of Indiana Jones, his paintings have a deeply personal touch that small businesses can still thrive off of.

“I feel myself like the Chamber of Commerce,” Loney said. “I’m doing my best, doing anything I can to keep them [the business] there, and the people for a long time.”

The appeal of window painting for these businesses is obvious.

“I think, you know, it’s an attempt to get people to look at the store,” Whiz Kids owner Lisa Smith said over the phone. “We’re right between the two big markets—Food 4 Less and Trader Joe’s. This makes the outside of our store more inviting, more exciting, and more fun.”

Eric Purinton, an employee at Takken’s, takes the same view.

“Most mom and pops have converted to our Abercrombies,” he said. “They get all their individual graphics from corporate. Us, we can be outside the box and have fun with it.”

It may seem old-fashioned, possibly obsolete, but window painting brings an individuality to an otherwise drab and faceless, consumer-driven climate. In the corners of their window fronts, both Loney and Seim sign their paintings and add their phone number. It’s a small touch, but a vital one—notifying passers-by that there’s a person and an artist behind the ad.

“I still like to do things by hand,” Seim said. “I’m more comfortable with that. … It’s always fun when children are watching you paint from a window. They watch you, and you think, ‘I could be impacting this person’s life.’ What they see, they could be thinking, ‘I wanna do that.’ Maybe they’ll be a painter. I hope it’s not gonna die out.”

So, in short. Window painting.

Jessica Peña’s still afraid of the dentist. You can comfort her by sending her a message at jpena@newtimesslo.com.