You can donate to Liz Gillingham's fundraiser for the Hibbles online here: bit.ly/3f3NY57. If you or someone you know is struggling with a mental health crisis, call the Central Coast Hotline at (800) 783-0607. To receive LGBTQ-plus-specific services, call or text the Trevor Project at (866) 488-7386 or visit GALA's website at galacc.org. For more information on mental health services available in SLO County, visit bit.ly/3tuU5oz.

On April 15, Sarah and Norman Hibble received the news that their 24-year-old daughter, Anne, had died. Authorities said they'd found her alone in her apartment, dead of an apparent suicide.

It was a total shock. With a single phone call, any parent's worst nightmare suddenly became a reality for the Hibbles. The situation was made more complicated by the COVID-19 pandemic, which Norman and Sarah say had profound impacts on Anne's life and ultimately played a role in her death. It affected her afterlife, too, making it costly and convoluted for the Hibbles to properly mourn the loss of their daughter.

Anne was living in Australia when she died, and the pandemic has rendered international travel nearly impossible, even in the most extreme circumstances. Australia's pandemic travel restrictions are unyielding, involving two weeks of mandatory isolation upon arrival and comprehensive COVID-19 testing.

"I understand the reasoning for it," Sarah said in an interview with New Times on April 23, a little less than a week into her quarantine in a government-run isolation facility in Sydney, Australia. "It's just—it's really hard that we're back to say goodbye to somebody who was so depressed and isolated that she took their own life, and now we're sitting in isolation waiting to say goodbye."

Now SLO County community members are trying to raise money for the Hibbles to help cover the costs of the trip and a memorial for Anne. While the online fundraiser is making progress, donations are still needed.

Not just a statistic

To the Hibble family, Anne's suicide was totally unexpected.

Norman and Sarah hadn't heard from Anne in a while before she died, but that wasn't unusual. Anne grew up in Australia and Atascadero, and she moved back to Brisbane, Queensland, a few years ago to attend college. Norman is Australian, and although he and Sarah have lived in SLO County for around 11 years now, four of their five kids were born in Australia, including Anne. Two of Anne's siblings also live in Australia, and finding the right time to connect with a 17-hour time difference can be challenging.

It wasn't until after her death that they discovered she'd been struggling with depression. She was isolated throughout the pandemic, and she'd cut herself off from some of her family and friends.

Anne came out as transgender around four years ago, and, though the rates of depression and suicide among those who identify as transgender are staggering, Sarah said Anne found an accepting community on her college campus. The entire Hibble family was supportive of her transition, too.

"We consider ourselves very progressive, and Norman and I do a lot of volunteer work with GALA," Sarah said.

They both work with local burlesque groups, and Norman worked as a legal observer at Black Lives Matter protests in 2020.

"I think it just is so sad because for all of the work that we've put in, our daughter was still not immune from becoming a statistic."

The Trevor Project is a national research and advocacy organization geared toward LGBTQ-plus issues. In its 2020 National Survey on LGBTQ youth mental health, 55 percent of around 40,000 LGBTQ-plus youth between the ages of 13 and 24 reported symptoms of major depressive disorder. Roughly 40 percent of those surveyed said they'd seriously considered suicide in the last year, with more than half of transgender and nonbinary youth reporting that they'd seriously considered ending their lives. One in five trans and nonbinary youth surveyed said they'd actually attempted suicide in the last year.

Though the causes aren't exactly clear, the Trevor Project survey points to inadequate and inaccessible mental health services and hostile attitudes toward the LGBTQ-plus community as major factors. Among those surveyed, 46 percent said they wanted counseling but couldn't get it. Six out of 10 LGBTQ-plus youth surveyed said someone had tried to convince them to change their sexual orientation or gender identity, and 1 in 3 said they'd been physically threatened or harmed due to their sexual orientation or gender identity. Over 80 percent of LGBTQ-plus youth said recent politics had negatively impacted their well-being.

But those who reported feeling supported by friends, family, and coworkers were significantly less likely to attempt suicide. The same was true among trans and nonbinary youth who had access to gender-affirming care and clothes, and whose friends and family respected their pronouns.

Still, after a year in COVID-19 isolation, Anne faced double the difficulties.

SLO County Behavioral Health Director Anne Robin addressed the correlation between mental health issues and the pandemic at a press conference on May 5. After a year of anxiety, loss, and isolation, Robin said, it's more important than ever for all community members to talk to their loved ones about mental health.

Behavioral Health aims to facilitate those conversations and promote healing through a number of free community mental health events planned for the month of May, including mental health crisis response training, a resource drive, and an Investing in Youth Mental Health town hall. 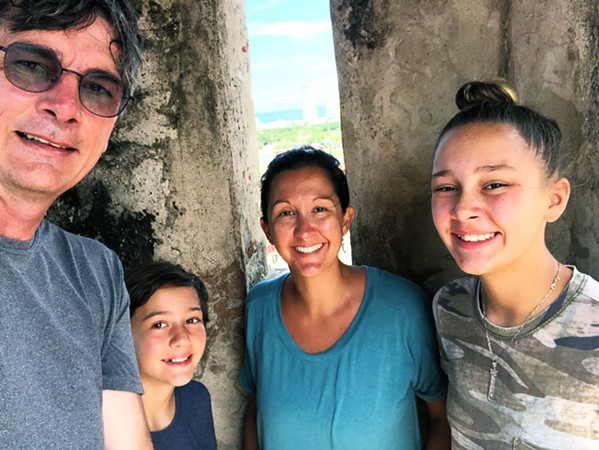 Sarah and Norman hope that Anne's death brings some awareness to the services available for those struggling.

"I just wish the world was kinder and more accepting and that mental health wasn't so stigmatized, particularly in these communities," Sarah said. "I wish that people felt comfortable reaching out. I wish that more people would, even when it's hard to do right by their friends, when someone's struggling don't just let them isolate. Call for help. Get the resources even if that person doesn't want them at the time.

"Because I'd much rather have somebody be alive and be angry with me for getting them the help they need than not be here."

When Liz Gillingham heard about Anne's death, she wanted to do more than just offer her condolences.

Gillingham has known the Hibbles for around six or seven years. She met Sarah through a mutual friend—Anthony Allesmith, owner of The Prancing Chef—and they've been friends ever since. Now they're both members of the same local dance troupe, which, in non-pandemic times, hosts performances that Norman DJs through his events company, Light and Sound.

"This couldn't have happened to nicer people and more welcoming parents," she said.

When Anne died, Allesmith coordinated a support system for the Hibbles, cooking them hot meals and ensuring that their farm in Atascadero was tended to. He suggested that Gillingham start a fundraiser to help cover the Hibbles' travel costs to Australia, and she immediately put together a GoFundMe online.

The goal is to raise around $25,000, funds that Gillingham said will go toward flights for the four Hibbles currently living in the U.S., the mandatory government quarantine in Australia, and Anne's funeral.

Tickets to Australia cost around $4,000 per person right now, Gillingham said. The Hibbles had to apply to travel to Australia mid-pandemic, arrange for their kids to travel without Australian passports (theirs had expired), and had to get COVID-19 tests for each member of the family. Once they arrived in Sydney in late April, the four of them went into quarantine in a small government apartment. They weren't allowed to step out of their room for two weeks, meals were delivered, and they'll ultimately be responsible for the cost of room and board—around $5,000 Australian dollars.

So far the GoFundMe has raised nearly $13,000, which Gillingham said was enough to cover the Hibbles' trip to Australia. Now they need more to get back.

Anne wasn't just trans. She's not just a number on a graph about rates of suicide among LGBTQ youth.

Anne was a beloved daughter and sister and friend. She was gentle and kind to everyone—the type of person who could connect with anyone over almost anything. One day she'd play made-up games on the farm with her younger siblings. The next she'd play cribbage with an elderly couple who lived down the road.

She was also a proud gaming nerd who thrived in computer sciences and programming. She loved LARPing and cosplay, a frequenter of Renaissance fairs and the Sacramento Comic-Con. She was always a star student, getting straight A's even in her college-level high school classes.

She'll be sorely missed—by her family, by San Luis Obispo County, by Queensland. What hurts most, Sarah and Norman said, is that her death was entirely preventable.

Norman believes we can all learn something from Anne: You never really know what someone else is going through, what internal battles they might be fighting, where they've been. So be kind to each other. Show compassion, even for those you don't understand.

Above all else, he said, check in on your loved ones.

"It's easier to keep in contact with the people that you care about than it is to get through all the rigmarole of having to go somewhere to say goodbye," Norman said. Δ