As of now, egg-laying hens, breeding pigs, and calves raised for veal in California are only required to have enough space to turn around freely, lie down, stand up, and fully extend their limbs.

That could all change in less than two months. A voter-approved law that would set more stringent space minimums for some farm animals is slated to take effect on Jan. 1, 2020. But the law, Proposition 12, and its passage have been controversial among animal rights activists—who say it doesn't go far enough—and some farmers and ranchers across the nation—who argue the law would impose unfair restrictions on producers even outside of California. 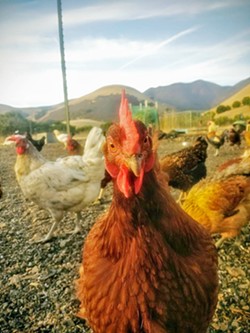 Now a federal lawsuit questioning Proposition 12's constitutionality could threaten its implementation altogether. Either way, farmers and ranchers on the Central Coast aren't expecting to feel much of an impact.

While SLO County is considered a hot spot for the beef production industry, veal is more popular among dairy farmers, who can't use male bulls for dairy production but don't have the tools or space necessary for beef. They'll use their male calves in the veal market.

But dairy farming isn't popular in SLO, Santa Barbara, Ventura, or Monterey counties, Stornetta said, and neither are large-scale hog or egg farms.

California's poultry industry is likely going to have to make the biggest changes because of Proposition 12, Stornetta said, but most hog and egg operations on the Central Coast are small, backyard-style businesses, many of which already center on more natural or free-range growing methods.

Spumoni Egg Farm is one of those operations, and the Morro Bay-based farm prides itself on serving up fresh eggs from well cared for hens that are free to roam in both a protected coop and an outdoor space.

Their farm philosophy is all about providing the hens with what owner Daniella Magnano calls "a good chicken life," and although she said Proposition 12 is a step in the right direction for the welfare of livestock animals, it's a "nominal one at best."

The minimum space requirements outlined by the law would only impact egg-laying hens, breeding pigs, and calves raised for veal, and it would be phased in over the next several years. In 2020, egg-laying hens would be required to have 1 square foot of floor space each, space requirements for breeding pigs would be unchanged, and calves raised for veal would need 43 square feet of floor space.

By 2022, egg-laying hens would have to be placed in cage-free housing systems that provide at least a square foot of floor space per hen and allow the hens to move around freely. Breeding pigs would need 24 square feet of floor space each, and requirements for veal would remain unchanged.

Spumoni Egg Farm won't need to make any changes to comply with these requirements, Magnano said, as it already provides space far beyond that outlined in Proposition 12.

"While an indoor, densely packed confinement building with a square foot or so of personal space per laying hen is an improvement on the intensely constricting battery cages, it's hardly a natural life for a bird," Magnano wrote in an email to New Times. "We would much rather see species-specific needs and tendencies provided for, even in large-scale operations. Some of these would be exposure to sunshine, fresh air, soil, and dust bathing areas."

Animal rights activist and founder of SLO's Happy Hen Animal Sanctuary Zoe Rosenberg agrees. She told New Times that while Proposition 12 has shown that policymakers and residents of California care about farm animals, its regulations will have little effect on animal welfare.

Rosenberg said that although some local farmers and ranchers might contact her to have animals placed in her sanctuary while they're working to make more room to comply with Proposition 12, that hasn't always been the case. Hens on egg farms were given more space by a similar law several years ago, and Rosenberg said that resulted in the slaughter of a large number of birds just to make more room.

"In my view," Rosenberg wrote in an email to New Times, "as long as animals are being raised for profit, their comfort will never be a priority in the eyes of large corporations and farm owners."

Still, farmers and ranchers across the nation say the law—specifically its ban on the sale of products in California that do not meet the new space requirements—goes too far.

In October, the North American Meat Institute, a nonprofit trade association that provides regulatory assistance to meat packers and processors, filed a federal lawsuit against the state of California challenging the constitutionality of Proposition 12.

In the complaint, the Meat Institute argues that the sales ban included in the law illegally forces farmers and ranchers outside of California to comply with its requirements, which "go well beyond current industry standards," or abandon the California market. The Meat Institute is seeking a preliminary injunction that would halt implementation of the law.

Though Proposition 12, whether it goes into effect or not, isn't expected to have any major impacts on local farmers and ranchers, it brings up long-standing concerns that the people making laws that impact farmers don't always know much about farming, according to Brent Burchett, president of the SLO County Farm Bureau.

When animal rights activists and legislators who might not know all the ins and outs of agriculture start dictating how farms are run, Burchett said, "That's bad." Δ