Locals call it WOPN (wop-in): The World of Pinot Noir has moved into luxurious new digs at Bacara Resort 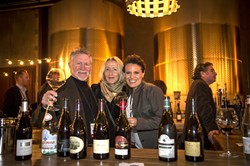 It’s time once again for one of the Central Coast’s finest wine celebrations of the year, World of Pinot Noir (WOPN). This wildly popular, two-day event provides educational tastings and winemakers’ dinners that go far beyond the norm. Uniquely, the participating winemakers direct the spotlight strictly on pinot noir, which is one of the most popular varieties produced in SLO and Santa Barbara counties wine regions. Although it takes place in Goleta this year instead of Shell Beach, it’s still as popular as ever. Some locals aren’t happy about the move, however, which I’ll explain later in this column.

Here are just a few of the reasons WOPN is worth following to Santa Barbara County. The event focuses on one-of-a-kind experiences with comparative tastings of pinots representing the finest growing regions around the world, gala dinner parties, the opportunity to meet some Hollywood movie stars, and educational tastings to learn how to recognize the subtle nuances in one of the finest varietals on the planet.

I could go on and on about my favorite moments, having attended all but two years since this event was founded in 2001. But I’ll limit it to a few great moments the year WOPN introduced us to Rex Pickett, the celebrated author of Sideways. For most Central Coast wine lovers, the debut of the film in 2004 was exhilarating. During my first viewing I found it ridiculous, hysterical, poignant, wonderful, and thrilling when I spotted our own wine community characters interacting with the stars.

The first winery scene was in the rustic tasting room at Sanford Winery where the legitimate manager at the time, Chris Burroughs, poured the wines for characters Miles (Paul Giamatti) and Jack (Thomas Haden Church). While watching Miles explain the nuances of tasting wine wines to his inexperienced pal, I cracked up when Miles asked incredulously, “Jack, are you chewing gum?”

In fact, several scenes in Sideways made me scream out in hysterical laughter, like Miles and the dump bucket moment, and when the cuckolded husband ran out of his house full monty to chase Jack down the street. Many scenes took place in the Hitching Post II in Buellton, which made chef/vintner Frank Ostini’s restaurant a dining destination for tourists who visit the Santa Ynez Valley to take the Sideways tour. It’s still nearly impossible to obtain reservations no matter what day of the week you wanted them.

A new film named SOMM, quite popular within the wine industry, documents the rigors of studying to be a Master Sommelier (MS), and how difficult it is to pass the extensive tests to earn that storied title. I haven’t seen the film yet, but viewed the YouTube trailer which provided a great quote: An unnamed character, frustrated by the intensity of studies for the exams, cried out: “It’s a lot more than just wine. It’s a drug, really.” Two industry experts who appeared in the documentary/movie were Brian McClintic, MS from Les Marchands Wine Bar & Merchant, and DLynn Proctor, winemaking ambassador from Australia’s renowned Penfolds Winery.

During the upcoming World of Pinot Noir, Burroughs, Ostini, McClintic, and Proctor will appear together onstage for a seminar titled, “Hollywood and Wine Seminar.” The “Sideways vs. SOMM” tasting takes place on Saturday, March 1, from 10 a.m. until 2 p.m. at Bacara Resort where most of the events will be held.

The seminar will be moderated by Sunset Magazine’s wine editor, Sara Schneider who will lead the blind tasting with the pros and invite each star to share their experiences in the making of those movies. Each panelist will bring a pinot noir of their choice to pit against the others, which will also be shared with every guest at the seminar. After the tasting guests will enjoy a special lunch prepared by Chef Ostini and his Hitching Post II team.

That, I must point out, is the beauty of WOPN—every guest there walks away with the memory of unforgettable wines and amazing lifestyle experiences. During the afternoon grand tastings, if you should require a break from sipping and spitting, Sideways and SOMM can be viewed free in Bacara’s theater (yep, the theater surprised me, too). So here’s what you do: Seek out your favorite pinot producers, check out some you don’t know, and take breaks when you need them by watching these very entertaining wine movies. By the way, following the “four S rule” is the best and only way to keep your head if you intend to taste pinots from many wineries: You should swirl, sniff, sip, and spit. Plenty of spit cups will be available, which I strongly urge you to use, and do gulp down as much water as you can throughout the tastings.

Although this great event has taken place in Shell Beach for the past 13 years, this year it has moved to Goleta at the exclusive Bacara Resort. If you live in SLO and want to attend WOPN this year, you may want a nearby bed to sleep in. Thanks to WOPN event coordinator Damon Miele and his team, there is free shuttle service to and from several Goleta hotels, which makes a visit nearly 100 miles south far more appealing. Among the choices are: Best Western South Coast, Courtyard by Marriott Goleta, Hampton Inn, Hotel Goleta, and Pacifica Suites.

For tickets and/or reservations, it’s best to visit worldofpinotnoir.com to get them in advance. That ensures you’ll get into the events. During Saturday’s grand tasting parking may be limited. If so, Miele noted there will be auxiliary parking with a free shuttle to and from Bacara Resort. Do check the website before your arrival in Goleta to save time if there’s only room to park away from the resort. “Most events on Friday sold out,” Miele noted, “but you can still get in for Saturday’s tastings and dinner gala.”