Locals gather to drum for rain at Steynberg Gallery

In 2013, California received less rain than any year since it became a state in 1850. It’s dry out there, people! What can we do? You need clouds for cloud seeding, so that’s out. You could pray for rain, but my guess is you’re already doing that. I know I am. Every time I water my lawn, I lament how my yearly sewer bill will be higher than it should be since the City of SLO uses December through February water use to estimate our monthly sewer usage.

Maybe we need to look to the past, you know, for a rain making ritual!

It’s Friday, Jan. 24, and I’m walking into Steynberg Gallery, where I’m neck deep in some seriously concentrated energy from about 120 people who really want some rain. The stage is filled with percussionists beating in time, while Tim Stein sonorously invokes a rhythmic plea through a microphone: “What we’re asking for is rain. It’s as simple as that. We’re asking for rain.”

People are shaking rain sticks and other handheld percussion instruments. Others dance around, arms upwardly beseeching the heavens to open up and dump some water on us, pretty please!

Rainmaking is a ritual still practiced by some Native American tribes, who perform dances to encourage precipitation. Julia M. Butree, in her 1930 book The Rhythm of the Redman, describes one such dance in which the Zuni would don feathers, turquoise, or other blue items meant to symbolize rain and wind. There’s definitely a fair amount of blue apparel by the attendees here tonight. Coincidence?

There’s also a shrine set up at the foot of the stage, and on it is a red seated statue of Buddha, a hand-painted gourd with blue raindrops falling through a yellow sky to land in a blue sea. I also see a candle with the Virgin of Guadalupe; a stuffed toy dolphin, otter, and seal; a conch shell; some twine-wrapped sage; a trio of bananas (huh?); a frog statue using its front legs to cover where its ears should be (are there a couple more left at home, one covering its eyes, the other its mouth?); tubes of paint; a little basket filled with stones; and a small potted succulent. People continue to come forward and add to this mélange of items—offerings to whatever entity might be out there capable of making some freaking rain.

It’d be easy to mock such a gathering, but the energy in the room is undeniable! I mean, I can feel it! Will it bring rain? According to my Weather Channel app, there’s a 30 percent chance we’ll get some on Thursday, Jan. 30. 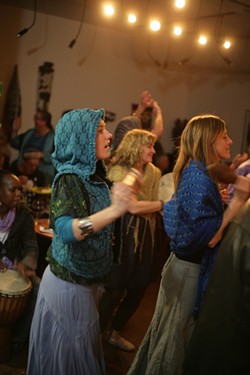 Get up and dance, people! It can’t hurt and you might have some fun!