See what Beerwood has in store for you from 11 a.m. to 10 p.m. seven days a week at 690 Santa Maria Ave. in Baywood. Visit thisisbeerwood.com to check out the menu, and find them on Instagram @thisisbeerwood.

The sweet, smoky scent of bacon sizzling away in the kitchen floated over Beerwood's patio on a recent Thursday as the restaurant prepped for lunch.

Black outdoor couch cushions soaked up the heat of a day heading toward noon, making it feel warmer than Baywood's 60 or so degrees as co-owner Annie Steinmann talked about their first month and a half in business.

"It was nuts. It's just a community spot. Everyone walks from their house. Kids run around like maniacs," Steinmann said. "It's awesome."

Beerwood opened on April 3, bringing a beloved Baywood spot back to life after The Old Alehouse closed in December 2019. Prior to the Alehouse, it was the Baywood Tavern. Steinmann, who started working at the location when she was 17 years old, said she served customers at both.

It's also the spot where she and her husband, Alex Flores, went on their first date—when they also talked about what they would do if they owned the spot.

"Alex and I have been planning this for seven years. We've thought about it in every detail. We've been thinking about it forever—the details," she said with a laugh. "We knew what we were doing. We were ready."

Flores also worked there. They met and planned with their future business partners there, Blake Lohman and husband and wife Troy Gatchell and Liana Harlan, talked about the roles each would take on. Steinmann and Flores take care of the front and back of the house, Gatchell's on the books, Harlan takes care of social media/web, and Lohman is the handyman, making sure everything stays in working order.

Together, they watched the little patio and beer pub on Santa Maria Avenue evolve and change over the years, keeping its ever-present community of customers, who supported it as a place to gather.

"We were equally as much fans as we were employees of the previous places here," Flores said. "We needed it for our community, and we learned a lot from it." 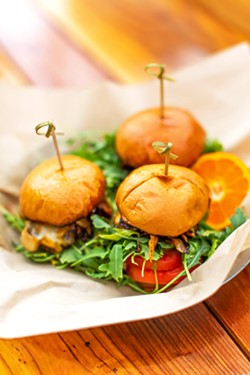 "It was crazy. It was roller coaster," Steinmann said. "We did not want to buy the building."

After that text, Gatchell said, they reached out to everyone they knew to try to pull together the funds to purchase the building. Banks weren't lending money for commercial enterprises like theirs, he said, because it was the middle of the COVID-19 pandemic.

Family from all over the world chipped into the fund, as well as longtime customers who said they could help with little chunks here and there just so they could get it open and the community could once again have an outdoor spot to gather.

In two days, they pooled the money they needed and closed a two-week escrow in August 2020.

"We wouldn't be here without them," Gatchell said of the community. "We had people come down and volunteer time to help us."

Together, they brought the abandoned patio and building back to life. Clearing weeds, leveling the patio and pouring concrete, building new wood fencing, and planting a garden.

"Eighty percent of the plants and flowers here were brought by community members and customers. It's been quite a stone soup style endeavor," Flores said.

"We just kind of wanted to bring it back," Gatchell added. "Hanging out down here, you're always running into friends and people you meet over the years. ... It's been a journey actually." 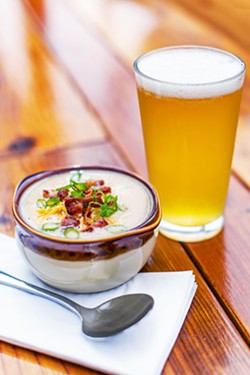 People would drive by as they were working and ask them when they were opening, Gatchell said.

At one point, Steinmann said, a longtime customer stopped by to ask a favor. He and his wife used to come into the Alehouse once or twice a week for lunch and a couple of beers. But at the beginning of the pandemic, both were diagnosed with cancer. Although Gene was able to weather the illness, his wife unfortunately didn't. He asked if he could spread some of his wife's ashes in the garden as it was being planted so he could still come by and have lunch with her.

That's the kind of place the building on Santa Maria Avenue is and what it means to the community of Baywood.

And now that they're open, Gatchell said the No. 1 comment has been that the food is amazing. Something Flores attributes to the fact that almost everyone in the kitchen is a mother—so there's a little bit of extra care and love in the plates they serve.

Sauteed Brussels sprouts with garlic, Parmesan, and olive oil and a choice of bacon, chorizo, specialty cheese. Avocado Caesar salad with tomatoes, cucumber, and capers. Breakfast all day. Chorizo and beef sliders with grilled onions and garlic, arugula, tomatoes, white cheddar, and Beerwood aioli served on a brioche bun. And let's not forget about the charcuterie boards.

"The best charcuterie on the Central Coast, I will say that. It's insane," Steinmann said.

Giant wooden platters (made by a neighbor) are packed with cheeses, cured meats, nuts, fruits, olives, and fresh bread. You can also get a sausage board with a medley of Cayucos Sausage Company sausages. They even have a chocolate charcuterie board, which contains different housemade chocolates with seasonal fresh fruit (from the farmers' market that happens every week on the streets outside their front door).

Let's not forget the beer, either. With 12 taps, for now, and plans to bring in more as well as the potential for avid homebrewer Gatchell to craft some of his own beer in the future, the beer-soaked tradition of the Tavern and Alehouse lives on at Beerwood. It's a place for brews, food, and fun.

Beerwood's owners see it as an investment in their neighborhood, a place that allows the small community to continue as it was and a space to live out their dreams.

"I think it comes down to the right time and the right people," Gatchell said. "Everyone thinks you're crazy buying a bar and restaurant in the middle of [a pandemic]. Where there's chaos, there's opportunity as well." Δ

Editor Camillia Lanham is a fan of those chorizo-beef sliders. Send food news to clanham@newtimesslo.com.