This story begins 18 years ago at a rented house in Los Osos.

Claudia Goff was away at her job at San Luis Obispo's old General Hospital. Her then-husband and daughter left their house to take a walk to a local market. They were gone, say, 15 minutes. 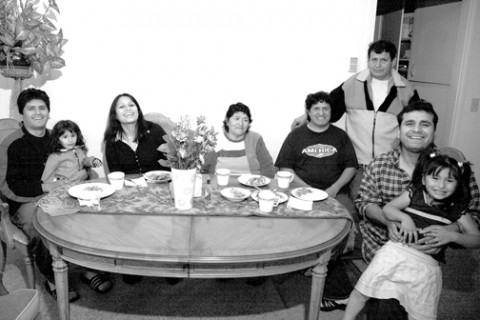 # As they were walking back, you can imagine the conversation: "Wow, look at those flames." And then the final awful realization.

It was an electrical problem. By the time it was over, the house was cinders. Everything was destroyed: Childhood photos, love letters, jewelry inherited from a grandmother.

And yet, of course, it could have been so much worse. A family car, parked in a detached garage, was saved. The tools her husband used to make his living were also spared. A neighbor had opened the door as soon as smoke started pouring out, giving an escape route for the cat.

A pet rabbit was killed, but even that wound had a partial salve.

Help flowed in. Friends gave not just their hand-me-downs, but their treasures. The firefighters threw a party and bought them a new rabbit. The community helped them rebuild their lives.

"It didn't give us a moment to at all feel badly about what had happened," Goff said. "There wasn't that space that wasn't filled up with generosity and love."

They moved into a new home with only three paper bags of belongings. Soon, though, they had not only all the possessions that make a life, but a new sense that life is not in the possessions.

In 2001, Claudia Goff's mother died. Her father remained in their Los Osos home as long as he was able, but last September, her father moved to an assisted living facility in Santa Rosa.

The facility is furnished. He took along treasures, but there was still a lifetime's worth of furniture and more in the house.

It fell largely to Goff to sort through the accumulated belongings of a throw-away-nothing Depression Era couple. Where should it all go? For months, she put off answering that question, unwilling to wade into the stuff and its accompanying baggage.

By February it was time to act. She put an ad in the paper there would be a garage sale. People would come and haggle and buy and take things away. She'd have money in exchange, but it would come at an emotional price.

It didn't feel right. What she really wondered was, wasn't there somebody out there who could really use it all?

Betzabeth Cerron moved to San Luis Obispo in 1995. Originally from Peru, she took classes at Cal Poly and graduated two years ago with a degree in business administration. She and her family built a life. She works as a financial analyst at Moonstone Hotel Properties.

For nearly 11 years, she and her extended family lived in a rented home on Broad Street in San Luis Obispo. About 1:30 a.m. on Feb. 5, a fire started in the back of the house and quickly spread. Firefighters believe it was an electrical problem.

She woke up to smoke, the screams of a friend's infant daughter, and a pounding on the door by Tom Weidmer, a passerby who saw the fire and is now being praised as a hero. She escaped with her daughters through a door that her brother-in-law had to kick open because, in the chaos, she couldn't find the keys.

The house was unlivable. They'd lost everything, but of course it could have been so much worse. All eight people in the house escaped unharmed. One car was destroyed, but a second was saved.

The community responded in myriad ways. The Red Cross helped pay for a hotel. Then Cerron's employer helped pay to extend their stay. Neighbors held a barbecue and raised money for them. Media attention prompted donations. "Just so many people, so much help," marveled Cerron. They still didn't have furniture, however.

You can see where this is going.

A social worker interested in putting out a call for help on behalf of the family spoke to Betzabeth Cerron and asked her, "What do you need?"

"I said I didn't have anything. I said I could use furniture or basically anything," Cerron said.

An e-mail was sent out, and, through common friends, it reached Claudia Goff.

"She told me about this family and I said, I want to give them everything that I have in this garage sale," Goff said. "Not only do I want to do this, this is what I am supposed to do."

Goff remembers Cerron and her husband coming over to look at the stuff: "I said, 'Take what you want.' They said 'We want it all.'"

The leather couch. The 50-year-old marble coffee table with Claudia's childhood scribbles still visible underneath. The dining table. The big bed. Everything.

Two weeks later, Cerron and her family had found a place to live, a mobile home with a large, utterly unfurnished living room.

They came with a truck and Goff helped load it. The furniture is beautiful and Cerron said she's grateful. But she's also changed.

And she's made a promise to herself: "[Giving the furniture] was such a great thing to do. If I have an opportunity to do it, I would do it. I would want to."