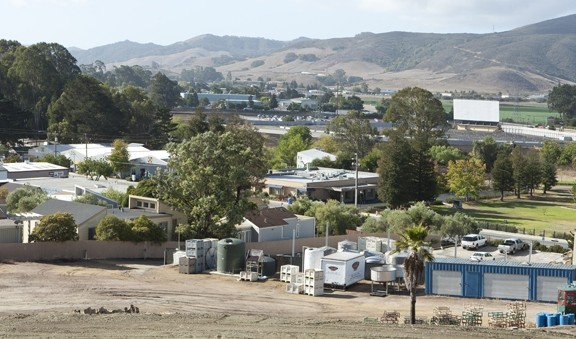 These are just some of the words neighbors have used to describe the smell in the west end of the Villa Fontana condo complex  in San Luis Obispo since a wine manufacturing plant began operations next door.

For more than a year, residents of Fontana Avenue and Loma Bonita Drive have attempted to put a cork in SLO Wine Studio’s operations after complaints of unpermitted outdoor wine equipment, improper waste storage, and other code violations drove the city to notice the business for violations in June and set an administrative hearing for November.

But the neighbors are still complaining that the city has dragged its feet in responding to the matter. The operation has been allowed to continue since the original notice to correct violations went out back in November 2012.

On a recent morning, New Times reporters walked an easement along the hillside above the 54-unit condo complex with resident Greg Hitter, who said he’s lived in the complex since 2003.

“At night there’s a lot of noise, like the sound of bottles rattling around the back of a pickup, and of course, the prevailing winds blow right over the hills and carry that smell right into the neighborhood,” Hitter said, pointing down at the tank farm and other equipment installed against a wall in the facility’s back lot. The building’s nearest neighbors live some 20 to 30 feet away.

There was no activity in the lot, but as a mild westerly breeze blew past, the accompanying smell could best be described as that of a recycling center where someone would turn in cans and bottles. It was the sweet and overpowering odor of stale booze.

The roughly 11,000-square-foot storage and processing center is used for bottling and for storing wine barrels, stainless steel tanks, and other winemaking equipment. There’s also a small tasting room. According to the California Department of Alcoholic Beverage Control, the facility processes and stores material for 11 small local wineries.

The smell, noise, and other issues were much worse last year, Hitter said, when numerous complaints drove city community development staffers to conduct visits to the site in October 2012. Those staffers reported finding numerous unpermitted improvements, and code enforcement sent the owner a notice to correct the violations and cease operation of the unpermitted equipment. The staffers also alleged major violations, including outdoor wine processing, operating outside of permitted hours, failure to enroll in the city’s Industrial Waste Program, the accumulation of grape waste along the hillside, and violating the fire code.

The facility’s failure to comply resulted in a $323 fine, but it continued to operate, Tauria Linala, president of the Villa Fontana Homeowners’ Association, told New Times. When the complaints continued—including two to the Air Pollution Control District—the city again sent another notice and issued an administrative citation of $400.

But the process has since been stalled as the city allowed the owner time to consult with an architect for the construction violations.

That all changed on Oct. 15, when Linala spoke before the San Luis Obispo City Council and was later informed by the Community Development Department that the city has scheduled a public administrative hearing for the matter on Nov. 15. The city will likely demand that the violations be corrected again, but the decision could be appealed by the owner to the planning commission, whose decision could also be appealed to the City Council, according to Doug Davidson, deputy director of the community development department.

As of press time, SLO Wine Studio owner Mike Kyle could not be reached for comment.

Resident Patrikya Kuznetsoff told New Times the issue is about more than just an annoying smell. People have felt sick, she said, and there are recovering alcoholics living in the complex especially impacted by the stale wine fumes.

“To what point are they going to dream the American Dream at the expense of their neighbors?” she asked.

“There are places where that NIMBY attitude is everywhere, I understand that. But we’re saying flat out this can not operate here for very straightforward reasons,” Linala said. “This is not a NIMBY issue.”