The Oceano Dunes District, with its rolling sand dunes stretching from Grover Beach down to Guadalupe, has made its fair share of cameos in movies, TV shows, and music videos.

In the 1920s, Cecil B. DeMille famously transformed the Guadalupe-Nipomo Dunes into an ancient Egyptian city for his silent film The Ten Commandments. Johnny Depp sailed his ship over the dunes and into the ocean as Captain Jack Sparrow in The Pirates of the Caribbean: At World's End, and the Oceano Dunes served as a dramatic backdrop in videos and advertisements for both Beyoncé and Rihanna.

"It's pretty impressive scenery there," local photographer Blake Andrews said. "I mean, if you want a particular style."

As the founder of SLOtography, Andrews and his photography and videography team have helped document scores of weddings, engagements, family portraits, and other events throughout the Central Coast since 2008. Every client wants something a little different—a picturesque backdrop overlooking the ocean, a romantic shoot among the vines, the inclusion of favorite places or pets.

The Oceano Dunes is a frequent location request, and Andrews has the perfect spot—one he took care to avoid revealing. It's deep enough in the dunes that it appears incredibly remote in photos, but it's close enough to a nearby town to be reached on foot. That's important to Andrews, who believes driving on the beach is harmful to both human health and sensitive habitats in the dunes, and is unnecessary for most simple film or photography shoots.

Andrews typically packs up his camera and whatever equipment he can carry himself, rallies his clients, and heads out for a brief hike through the dunes to find the most footprint-free mounds of sand available. While he said driving out to shoot in the dunes might be necessary for larger productions, he prefers to walk.

"My personal approach to all of this is like, let's do this responsibly," Andrews said. "Let's not disturb natural habitats. And I think that's what this whole closure is all about. It's like, finally, let's get the snowy plover back its beach."

At a meeting on March 18, the California Coastal Commission voted to eliminate off-roading and most other vehicle access in the Oceano Dunes State Vehicular Recreation Area (SVRA) within the next three years, an effort to bring the park's uses back into compliance with the Coastal Act and its designation as an Environmentally Sensitive Habitat Area.

The decision, which came after nearly 12 hours of public comment and discussion, was a long-awaited moment of celebration for many SLO County residents, who have argued for years that off-roading in the Oceano Dunes SVRA disrupts sensitive habitats and culturally important lands, and negatively impacts the economic vitality and health of neighboring communities. It was, at the same time, a crushing blow to off-roading enthusiasts and the businesses that depend on the money they bring in. 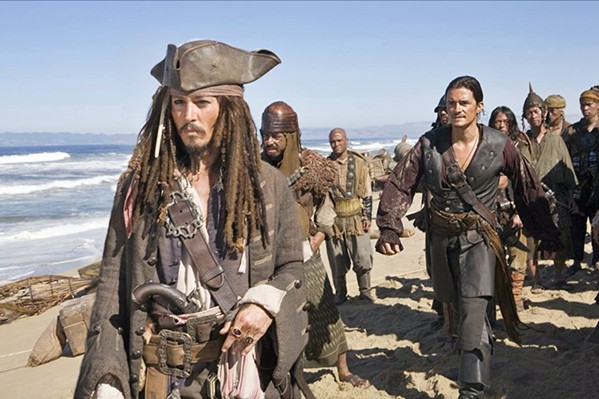 Although the Coastal Commission's ban is being challenged in court, a number of local elected officials said in March that they were relieved to see any final decision made, putting an end to the 40-year battle over vehicle access and finally bringing some sense of certainty to the region.

But the logistics of the closure and specific guidelines the park will have to abide by are yet to be determined, including how the park will handle requests from film crews, particularly those that require vehicle access.

Chuck Davison is president and CEO of Visit SLO CAL, which oversees the San Luis Obispo County Film Commission. Although requests to film in state parks like the Oceano Dunes are handled largely by the state, the SLO County Film Commission often assists film crews with location scouting, permitting, and obtaining any necessary equipment and workers.

Davison said the ease of access into the dunes by vehicle is undoubtedly a draw for big film crews that have to haul hefty equipment.

"The dunes have always been a hot spot for film in SLO Cal, and a big reason for that is the ability to drive on the beach," Davison said. "In order for these larger scale productions, like Beyoncé's shoot, to take place, they have to be able to move massive amounts of equipment onto the sand."

When large-scale productions are filmed anywhere in SLO County, the benefits locally are twofold, Davison said. The final products often work as free marketing for the county, bringing awareness to the area on a huge scale, and the casts and crews involved typically stay and eat in local hotels and restaurants for the duration of the shoot.

Davison described 2019 as a "light filming year" for the Oceano Dunes, when there were roughly 15 productions filmed in the area generating around $37,000. If film crews aren't allowed to drive on the beach in special circumstances, it could impact the whole county, and Davison said.

"We continue working hard with both parties to find middle ground," he said. "As a tourism organization we don't believe in an all-or-nothing approach. We believe in finding compromise. We are hopeful that others believe in that too."

It's not entirely unusual for California State Parks to grant film crews special access to hard-to-reach areas, according to Information Officer Jorge Moreno.

Most of the state's 280 parks don't have the kind of vehicle access that the Oceano Dunes District has, he said, but even big parts of the dunes aren't open for driving. At Oceano Dunes SVRA and Pismo State Beach, filming with vehicles or filming accessed with vehicles is not allowed if vehicles are prohibited within certain park areas, but Moreno said exemptions can be made if the request doesn't ultimately conflict with park classification.

"For example," Moreno said, "for filming or access to filming, vehicles are not allowed in the Dune Preserve, however we do allow vehicles north of the 'no vehicle' boundary on Pismo State Beach, again if the resources may still be protected and under staff supervision."

Whether or not a shoot is viable is generally decided by individual State Parks districts, which, upon receiving film permit applications, work with the film crew to ensure that the location in questions is accessible and that cultural, natural, and historical resources will not be impacted by the filming.

State Parks has approved around 140 film permits in the Oceano Dunes SVRA since 2016, Moreno said, charging a flat permit fee of $65 for simple shoots or $200 for larger shoots. State Parks charges extra for any staff time needed to monitor film crews for compliance.

Whether film crews will still be allowed to access portions of the Oceano Dunes by vehicle in the next three years, Moreno said, is still an unanswered question.