A San Luis Obispo manufacturer of unmanned aerial vehicles—known as drones—has been purchased by a major military contractor, Lockheed Martin, for an undisclosed amount. 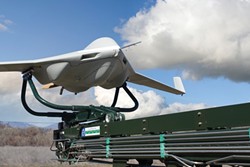 The SLO manufacturer, based in an imposing building off Vachell Lane, has provided more than 1,500 aircraft to various customers worldwide, “including tactical systems addressing urgent needs in Afghanistan and Iraq,” according to an e-mail to New Times from Alexandra Wildfong, a public relations spokesperson with Lockheed Martin.

Formerly known as AeroMech Engineering, the SLO company was started in a garage in Los Osos by two Cal Poly engineering graduates in 1999. Thomas Akers and Norm Timbs loved model airplanes and had just $700 in start-up cash, according to a Cal Poly Magazine article.

A blue plasticized banner that says “Lockheed Martin” now hangs at the entrance to the SLO facility, which has “approximately 65 employees,” according to Wildfong.

With a length of less than 7 feet and a wingspan of 14 feet, the Fury drone doesn’t require a runway; it’s deployed by a special launcher and captured in a net. The unmanned aircraft has the largest payload capacity and longest endurance of any runway-independent drone, the company’s website states.

“The Fury’s survivable configuration excels in areas where not being seen or heard is paramount for mission success,” according to the website. “With its low signature, Fury can support missions where radar, visual, infra-red, and acoustic detection is to be avoided.”

The Fury will continue to be built in San Luis Obispo, Wildfong said.