A contemporary gallery in Paso gets new owners, new art 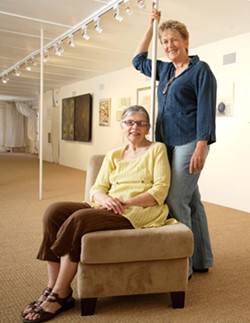 Rosa Lee Sonney characterizes Paso Robles’ fledgling cultural scene as a party. If that’s the case it’s a soiree the art appreciator has infiltrated, assuming responsibility—along with fellow artist Evani Lupinek—for the gallery space above Park Street’s FireFly Gallery. Both were former board members at ARTernatives when creative energy and collaboration in SLO were high. Now they’re bringing some of that energy and excitement to the North County, though they emphasize that this time around their focus is on creating a sustainable method for running their contemporary gallery.

“It was going to be closed as a gallery and they were going to do something else with it,” Lupinek explained how the pair acquired the space. “We’d been to a few openings and loved what they were doing so we were disappointed. They had said to Rosa Lee ‘would you like to do something.’”

To which Sonney replied, “not on my own I wouldn’t.”

Inspired by the location—downtown Paso Robles, mere blocks from the recently opened Studios on the Park—and the fact that the space was situated in a loft overlooking the store, Sonney and Lupinek took over. The FireFly Gallery became The Loft Gallery and the store beneath continued operating as it had before the transition.

They recruited what they call a stable of artists whose work would constantly be on display at the gallery. Currently, this stable is comprised of eight artists from all corners of the county. They intend to expand to 12 to 14, possibly representing artists from all corners of the country. During the process of identifying work they wanted to show, Lupinek and Sonney relied heavily on the Internet, and recommendations from Emily Miller, co-owner of FireFly. In fact, Miller was among the artists whose work was presented at the gallery’s Aug. 1 debut. As was Lupinek, whose paintings of blueberries defy the bowl of fruit still life tradition. Other Loft Gallery artists include Glynis Chaffin-Tinglof, Marcia Harvey, Aleah Koury, Tom Sage, and Tom Shultz. Though the gallery currently features a sculptor, the dual proprietors are hoping to add more dimensions to the work displayed in the space.

Maintaining a sustainable work level means rotating the artwork every two months, which is out of step with the standard one-month art show. But, Sonney and Lupinek are promising opening receptions that more closely resemble a New York or LA art party than a lackluster small-town opening. In fact, they’re hoping to connect with performance artists willing to stage work in the gallery during openings. Also, each opening will include one or two non-stabled artists just to add an element of spice to the show. The first of these free-agent features were Carol Paquet and Nevenka Schumaker. The next show, “Creative Departures” opens Oct. 3.

Sonney and Lupinek are departing from small-town gallery practices in another way as well; they insist that they’re ruthless about what makes its way onto their walls. The fact that an artist exhibits regularly with the gallery is no guarantee that their piece will be granted Loft Gallery real estate. Quality control, to Sonney and Lupinek, also means no mixing of genres. Whereas many venues display plein air beside photography beside contemporary painting, the Loft Gallery has a single emphasis.

“It’s apples and oranges,” Sonney said, of mixed genre exhibits. “You try to hang them together and that makes them messy.”

“We see the gallery as an art piece in itself,” emphasized Lupinek. “When you walk upstairs you need to be in a space that says art.”

In this, the pair has already succeeded. The Loft Gallery conveys the coolness of contemporary art in a venue that has the North County’s warmth. The work is varied, but cohesive. And the Loft Gallery is situated in a city riding a wave of cultural and artistic growth. For the cynical and SLO-centric, I offer the following advice: join the party. Go perform in a loft. Or, at the very least, pop on over the grade for the Oct. 3 opening.

Arts Editor Ashley Schwellenbach would like more contemporary and fewer bowls of fruit from the art scene. Send promises of evolution to aschwellenbach@newtimesslo.com.