Photos Courtesy Of Luis Escobar Reflections Photography Studio STAGE PRESENCE Emily Trask (left) will direct a livestreamed reading of The Thanksgiving Play on Sept. 25 and 26. She also directed The Agitators, both of which are part of PCPA's InterPlay series. Yusef Seevers (right) played Frederick Douglass in The Agitators reading. Trask and Seevers have performed together in Shakespeare in Love, The Importance of Being Earnest, and other PCPA productions.

Visit pcpa.org/InterPlay to find out more about PCPA's InterPlay series. Admission to join each reading over Zoom is $5. The Thanksgiving Play will be livestreamed on Friday, Sept. 25, at 7 p.m. and Saturday, Sept. 26, at 1:30 p.m. The Interplay series runs through Saturday, Oct. 24.

Originating in 2002, InterPlay—the Pacific Conservatory Theatre's (PCPA) popular, seasonal play reading event—has traditionally been held at Santa Maria's Severson Theatre. Rather than postpone or cancel this year's iteration, the company decided to adapt and expand the weekend-long event into a series of several virtual offerings.

Running through Saturday, Oct. 24, PCPA will stream live readings of six different plays through Zoom. The first program in the series, a reading of The Agitators by Mat Smart, premiered on Sept. 18, and the second play reading—The Thanksgiving Play—will open on Sept. 25.

"While we would much prefer that circumstances allowed us to gather in a theater together, sharing these plays over Zoom actually provides some lovely opportunities," PCPA Resident Artist and Literary Associate Emily Trask, director of The Agitators and The Thanksgiving Play, told New Times.

"This format allows us to bring the immediacy and intimacy of a live theater experience to the comfort of your own home. It also allows us to have artists and audience members participating from all over the state and country who otherwise may not have been able to join us," Trask added.

"How cool is it that you could be experiencing a live play reading at the exact same time as someone in a different state?"

The plot of The Agitators follows the complex relationship between historical icons Susan B. Anthony and Frederick Douglass over the span of 50 years. PCPA regulars Yusef Seevers and Polly Firestone-Walker read as Douglass and Anthony, respectively.

"I am so excited for these two indomitable actors to get to breathe life into these words and characters at such an incredibly apt time," said Trask, who previously acted alongside both performers during The Importance of Being Earnest, Shakespeare in Love, and other PCPA productions.

The next reading, The Thanksgiving Play, which will stream on Sept. 25 an 26, is a seasonal satire by Larissa FastHorse. The audience will witness "good intentions collide with absurd assumptions as a troupe of 'woke,' white teaching artists are tasked with devising a school pageant about the first Thanksgiving and Native American Heritage Month" a lá Saturday Night Live, according to the play's synopsis.

"As PCPA's literary associate, I get to have a 'hands on' role with InterPlay and do one of my favorite things—read a whole bunch of plays," said Trask, who also gets to access her passion for play reading as the host of PCPA's Rediscovery Reading Club, another virtual program offered through Zoom.

In addition to The Agitators and The Thanksgiving Play, other upcoming play readings in the series will be The Tall Girls by Meg Miroshnik, Things I Know To Be True by Andrew Bovell, Mother Road by Octavio Solis, and Alabama Story by Kenneth Jones.

During the selection process, Trask sorted through several contemporary plays, all recently premiered, written within the last year or two or still in the early stages of workshopping, she explained.

"Some plays come from theater colleagues across the country who are workshopping a brand new script, some are suggestions from our PCPA students or alumni," Trask said. "Some come from existing relationships with cool, new playwrights whose work we're keeping an eye on. 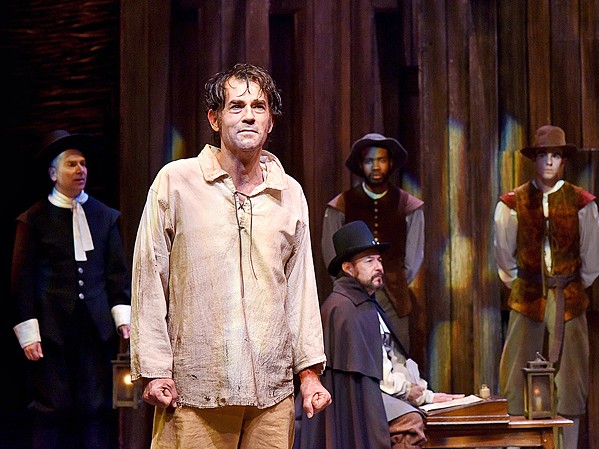 "One of the perks of doing contemporary, recently written plays is that the playwrights are usually still alive," Trask added, as each episode of InterPlay will be followed by a special talkback with the actors, directors, and occasionally the playwrights themselves.

While narrowing down the list of plays, ultimately ending in a total of six, PCPA sought out plays that specifically represented "a diversity of voices and styles," Trask said. Organizers of the series also had to consider how well each play would work as a script reading rather than a full-blown production.

"From there we try to select plays that work well in a reading format—with no scenery, props, or costumes," Trask said. "Just the story, the actors, and the audience." Δ