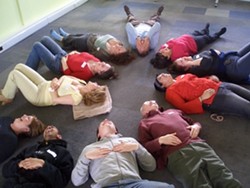 Dr. Kataria established the practice in March of 1995 in Mumbai, India, building on preceding forms of laughter therapy. He wrote, “Laughter Yoga combines unconditional laughter with yogic breathing (Pranayama). Anyone can laugh for no reason, without relying on humor, jokes or comedy. Laughter is simulated as a body exercise in a group; with eye contact and childlike playfulness, it soon turns into real and contagious laughter. The concept of Laughter Yoga is based on a scientific fact that the body cannot differentiate between fake and real laughter. One gets the same physiological and psychological benefits.”

According to local laughter yoga instructor Bob Banner, the benefits of the practice include increasing endorphins and serotonin levels; and coincidentally curbing negativity. Banner claims studies have shown laughter is beneficial if sustained for at least 10 to 15 minutes. According to him, 10 minutes of sustained laughter is equal to 30 minutes on a rowing machine. “Since laughter in Laughter Yoga is done in the form of an exercise, we can laugh as long as we want to get the guaranteed benefits of laughter,” Banner said.

Sessions can include up to 50 participants. The classes generally last 45 minutes to an hour long but can surpass that if people can’t stop laughing. All of the classes offered by Banner are open to anyone and he accepts donations after the session is over. Banner holds sessions in Los Osos, Pismo, Paso, AG, Templeton and SLO. “It’s energizing and a good inner workout. I felt all kinds of energy when I left. You breathe better when you laugh like that,” said local Laughter Yoga participant Christina Delekta. “I slept great after doing it.”

Banner discovered Laughter Yoga through a Spiritual Cinema Circle monthly DVD he viewed years ago. After viewing other films about it he decided to go to the American School of Laughter Yoga in 2009. He’s taught it for three months throughout the county. He attended a workshop with Dr. Kataria in Chicago to learn to become an instructor trainer of laughter yoga so that he is able to certify people interested in instructing Laughter Yoga sessions. “This is the time to introduce it to as many people as possible in this county. Later on I will be working with seniors in assisted living situations, corporate staff, colleges, cancer patients and one on one with special needs people,” he pointed out.

To celebrate the 15th anniversary of World Laughter Day, Banner will be holding a free event on Sunday May 2 at 2 pm in the SLO Public Library. A short film about the origins of Laughter Yoga from Mumbai will be shown and Banner will lead a Laughter Yoga session.

“I don’t laugh because I’m happy, I’m happy because I can laugh,” Banner said. “Laughter is the shortest distance between two people.”

The National Association of Letter Carriers will be having their 18th Annual Food Drive on Saturday, May 8, 2010. They will pick up non-perishable food donations left at mailboxes and deliver them to local food banks. It is the largest one-day food drive in the nation. During the last 17 years letter carriers have collected 982.7 million pounds of food. All food collected locally stays within the community …

Candidates are sought to serve as local delegates to the California Senior Legislature, for a four-year term beginning October 2010. The California Senior Legislature is a non-partisan, grass-roots body of 120 elected members 60 years of age and older, who serve as unpaid volunteers. The group meets annually in a four-day, legislative session in the State Capitol Building to develop legislation responding to the needs and concerns of older Californians. The election will be held in May 2010 and candidates must declare their intention to be a candidate by April 26. To declare an intention to be a candidate you can reach the Central Coast Commission for Senior Citizens located in Santa Maria at 925-9554 …

A dinner and auction to raise funds for survivors of breast cancer will be held at Edna Valley Vineyard in San Luis Obispo on Saturday, April 24 from 6 to 10 p.m. Chef Evan Treadwell of Lido Restaurant at the Dolphin Bay Hotel will prepare the meal. Tickets cost $175, or $1,400 for a table of eight. The event is sponsored by Enhancement, a nonprofit organization. For more information call 771-8640 or see enhancementinc.com.