Atascadero residents will have an opportunity to choose from three candidates—newcomers Josh Donovan and Jerry Tanimoto and incumbent Heather Moreno—for mayor on the Nov. 3 ballot. 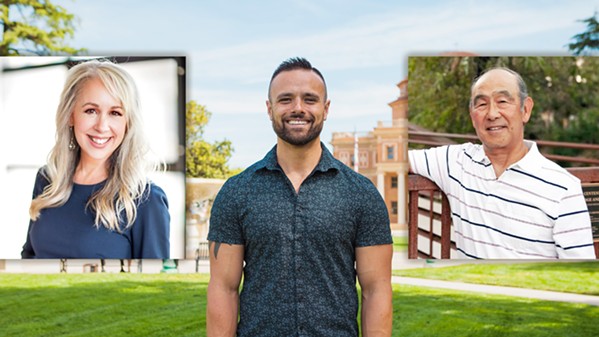 Seasoned candidate Moreno is seeking reelection as she reminds residents that she's a calming, thoughtful, and methodical influence on the City Council who has been helpful in bringing together staff, investors, developers, and community members to collaborate on projects and solutions within the city.

She points to her involvement in working to close the community's job and housing imbalance with the first co-working space in North County, which opened in 2018.

"That helped provide people in North County a place to work where they might normally be driving to San Luis or work in their home. We had some employees who had communications with people in China, so rather than being up at 3 a.m. and disturbing their families, they could go to the co-working space," she said.

Moreno is still working on jobs and economic vitality downtown by reimagining spaces like Del Rio Road and revisiting zoning options to accommodate commercial buildings, with the goal of bringing "head of household jobs" to Atascadero.

In order to understand what the community needs and wants for projects like that, Moreno established Talk on the Block, a time when community members who might not be able to attend City Council meetings can speak with Moreno or city staff members.

"We talked about fire, safety, roads, crosswalks, homelessness, vaping, drag racing, drugs, the zoo, and it was really good to connect with people and answer their questions. It was important to them and for them to learn more about how we operate, and it enabled us as a city to resolve some neighborhood issues more quickly," she said.

About five years ago, Moreno said the council came together to create a 10-year vision for the community, and she still stands by it.

The city has a lot to offer through outdoor recreation, a thriving arts community, and a history that's enjoyed by residents and visitors.

"I want Atascadero to be a place where people can live and work, live and shop. I think we can keep our unique charm and small-town feel, never having to trade it for economic vibrancy. We can have both of those," she said.

Atascadero means a lot to candidate Donovan, who's been a resident of the city his entire 36 years of life.

He remembers that many of his peers in high school went through the phase of wanting to leave the small town, but not Donovan. He said he's always had a sense of service and duty to his community.

"After high school, I joined the Marine Corps and was deployed to Iraq. About five or six years of being away from home gave me even that much more love for it," he said.

Donovan owns the gym Give Fitness Health Center, joined the chamber of commerce, and has volunteered and networked with other businesses and community nonprofits.

In speaking with Atascadero community members, Donovan said he's heard talk about wanting a change in local government but not seeing the new leadership to make it happen.

Community members have also expressed their concerns to Donovan about not being heard by the city's current leaders.

"There's an agenda they have and that they're pushing, but that's not accessible to the public. There's this 'head in the sand,' 'we already know what we're doing' predetermined ideas," he said.

In his experience as a business owner of a fitness gym, Donovan said, it's a very public-facing business, so he's comfortable with the fact that if elected he won't be able to please everyone.

"But what you can do is be really intentional about making sure that people feel heard, making the decision that appeals to the majority as much as you can, and then be willing to defend that decision and explain why it was made," he said.

A stronger Atascadero, he said, will be driven by a robust economy. In order to have that, he said, the city needs to be more business-friendly.

Mayoral candidate Tanimoto has also heard the concerns of residents who want change, and in being an active community member for more than 40 years, he also wants to serve his community by leading that change.

He plans to do so by listening to Atascadero residents on all sides of an argument.

"Regardless of whether I agree with them or not, I will listen to both sides and work with the people to come up with a consensus that will be fair to everybody," Tanimoto said. "I'm a very calm person, and I don't mind listening to people's opinions and their ideas."

Tanimoto's priorities for the community are to strengthen the local economy, reduce homelessness, ensure the safety and health of the community, and plan ahead for the city's future.

Homelessness isn't a unique problem for the city of Atascadero, Tanimoto said, but the community needs to work together to come up with new solutions that involve existing organizations, mental health services, and law enforcement.

Part of that solution is more funding for the local police department, which hasn't kept up with the city's population growth and increased calls for service.

"The department is very important to the community and the community's public safety. [That it hasn't kept up] just doesn't make sense to me and needs to change," Tanimoto said. Δ