As Jessica Zerolis shows me around her new salon in downtown Pismo Beach, it becomes clear that she's had a hand in everything here.

A former business and interior design student at Cuesta College, Zerolis picked out each black leather styling chair, aqua blue throw pillow, paint sample, and floor tile in the place—giving the salon a modern and minimalist feel with a beachy, welcoming twist. The space was so bare-bones when she got it that she was charged with installing everything, including the plumbing and electricity. 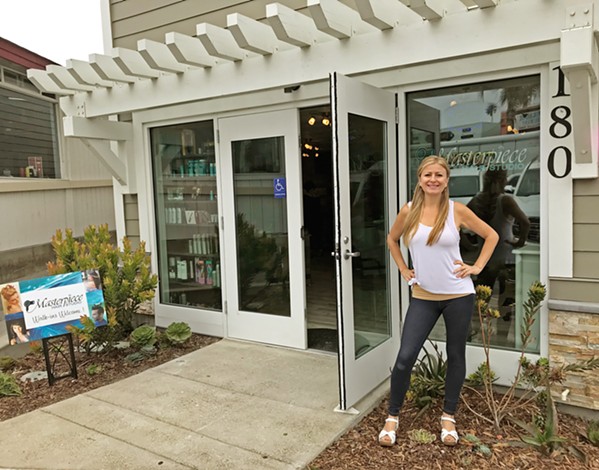 She hand-picked every hair and makeup product available for sale on the store's shelves, and she's even the mastermind behind each of the abstract, watery paintings adorning the salon's walls—acrylic pours she threw together just before she opened shop on Aug. 8.

Zerolis has always been creative, and to her, hair is just another canvas and a salon just another place to express herself artistically. That's why she named her new salon Masterpiece Hair Studio.

"It is art that we're doing," Zerolis says.

Masterpiece is one of several new businesses staking a claim on Pismo's main strip through the retail spaces provided by the Inn at the Pier, a 104-room beachside hotel that opened in the fall of 2017.

For Zerolis, the connection with the inn has proven to be nothing but positive. Her clients are allowed to use the hotel's valet parking services at a discounted price of $2.50 an hour—it's usually $6—and clients and staff alike can order food and drinks from the inn's room service menu. Masterpiece staff will be offering in-room facials and massages for hotel guests, and tourists and locals can stop in after a day at the beach for a quick blow-out, trim, or makeup touch-up before heading out for dinner or drinks.

Masterpiece, located at 180 Pomeroy Ave., sits just off the Pismo pier downtown, and the benefits of the central location alone are immediately obvious. As Zerolis and I talk, another employee flips through a magazine and nibbles on a charcuterie tray from the hotel. Groups of beachgoers are constantly walking past, and several stop to check out the salon's services and prices, which are posted on the opened doors.

Finally one asks about trims, and Zerolis' employee plops her into a styling chair for a quick shampoo. That happens all the time, Zerolis says.

But Zerolis wants the space to be welcoming to locals, too. Born and raised in Los Osos, with parents and grandparents who all also lived and worked in San Luis Obispo County, she says she has deep ties to this area. She also comes from a family of entrepreneurs—for years her grandma owned a stationery store in the area, and her grandpa owned his own architecture company in Morro Bay.

Zerolis has been interested in cultivating an artistic career since she took a particularly inspiring painting class at Cuesta. She looked into it, found a makeup class in Los Angeles, and signed up. Soon she was in cosmetology school in San Luis Obispo and fell in love with coloring and cutting hair. She worked for years at a salon in SLO, and now she has six employees of her own.

"It's just the most rewarding job," she says, "It doesn't even feel like a job. It's just fun for me to make [people] beautiful."

The Central Coast Aquarium announced on Aug. 14 that Nikki Adams, a Cal Poly professor of biological sciences, is the winner of its 2019 Ocean Stewardship Award. Adams, who helped create coursework to train the next generation of marine science educators, will be honored at a benefit dinner on Sept. 14. For more information, visit centralcoastaquarium.com. Δ