Look behind the bars

California's prison system is embroiled in controversy and covered 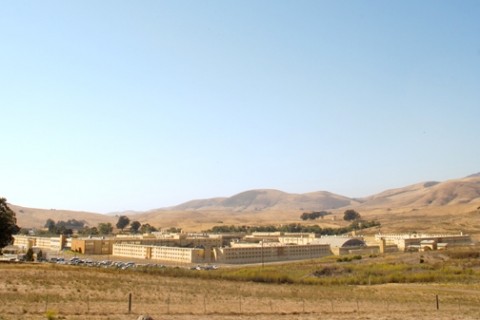 # in what appears to be a shroud of secrecy. However, Senate Bill 1521 attempts to open lines of communication by allowing media members access to prisoners. The bill passed the Assembly 71-1 last month, with a single no vote from San Luis Obispo's Republican Assemblyman Sam Blakeslee. It then passed the Senate 27-8 and is now on the governor's desk.

Current restrictions often prohibit journalists armed with the tools of their trade a pad and pen from interviewing prisoners. Interview approvals can take months, if the reporter is lucky enough to ultimately receive permission.

At stake is the media's role in providing the public with information regarding the prison system, the lives of prisoners, and the allocation of tax dollars. The following story came about through a jailhouse interview and mailed questionnaires.

Age and time
Bill Luetz said that he walked up to the front of the Oceano Police station 20 years ago and shot his estranged wife as three stunned policemen looked on.

As a prison hospice volunteer, Luetz spends a few hours each day at the bedside of 93-year-old Johnny Rodriquez. After 38 years in prison, Rodriquez can no longer navigate the dining-hall stairs. He bunks in the prison hospital ward and requires the use of a walker or a wheelchair to get around.

Inmates in California's sprawling prison system are getting older and feebler, and their medical costs are soaring. As the state grapples with the cost of incarcerating inmates, the expense of caring for older, sick, and dying prisoners is a growing problem.

Every year, the number of elderly inmates increases. According to the California Department of Corrections' (CDC) June 2005 census report, male inmates older than 50 account for 11.4 percent of the overall state prison population up from 4.1 percent in 1990.

Since 1995, the number of inmates older than 55 has increased by 85 percent in the United States, according to the 2004 Sentencing Project report. These numbers continue to skyrocket, as does the cost to taxpayers, though crime rates have been on a steady decline for more than a decade, according to the CDC.

Tougher sentencing laws and a massive reduction in paroles have strained prison and state budgets.

"The cost of housing people my age is astronomical," Luetz said. "Many of these guys are sick a lot."

Luetz is battling cancer and neuropathy, which affects the nervous system. Since his cancer diagnosis last year, Luetz has been transported into San Luis Obispo for sonograms, brain scans, and two magnetic-resonance imaging scans. Two guards are required to escort prisoners of any age during excursions outside the prison, adding to already skyrocketing medical costs.

The state's 33 prisons currently house almost double the population they were designed to hold. In addition to the financial burden of longer prison terms, issues such as health care, special dietary needs, and end-of-life care strain the already taxed system. The task of caring for a graying prison population is daunting.

In 1999, California began to plan an "older offender program" to manage aging inmates while saving taxpayer dollars. The program was ultimately discarded. Though many states have geriatric prison programs, California does not.

"We are looking at trying to put the right inmate in the right population as part of our restructuring plan," said Elaine Jennings, California Department of Corrections and Rehabilitation spokesperson. "Some places are better for aging prisoners. We are working on it."

At this time, there are no plans for statewide segregation of older inmates. The mainstreaming of the graying prison population continues to be paid for out of the state's tight budget.

"The prison board is tough," Luetz said. "If the board gives you a date, the governor usually rejects it. It is about as easy to get out of prison as it is to win the lottery."

The California Men's Colony boasts a less-violent population than do some of the state's more dangerous prisons, Luetz said. Though geriatric inmates don't live in fear of rapes and beatings, they are bombarded with the day-to-day struggle of bunking alongside gang bangers and violent young felons.

At 62, Ron Hayward is stuck in the upper bunk of a closet-sized cell and forced to endure hours of what he considers cruel and unusual punishment: rap music.

"They don't understand respect like we did," said Hayward, a CMC lifer incarcerated for murder 26 years ago. "The youngsters will take advantage of you if you let them."

According to the California Legislative Analyst's Office web site, older inmates are two to three times as costly to incarcerate as are younger inmates, yet they're more likely to be paroled successfully and less likely to re-offend.

"For these reasons, we recommend the Legislature adopt legislation requiring that nonviolent elderly inmates be released early to parole," the web site states. "We estimate this would generate General Fund savings of $9 million in the budget year."

Luetz is one of the lucky ones. His five children still visit and his youngest daughter has asked him to live with her if he's ever released.

"Greyhound carried me [as an employee] for 10 years after I was locked up," Luetz said. "Now I get retirement pay. I was proud to work for them."

On the outside, the burden of his healthcare would no longer fall on tax- payers.

Staff Writer Karen Velie can be contacted at kvelie@newtimesslo.com.