Last year a band I’d never heard of came to town. It was the middle of the week. The club wasn’t especially crowded. I was tired and the band took forever getting on stage. Thank God I didn’t leave, because that band has turned out to be one of my new favorites.

If you think that sounds weird, here’s what the band’s bio says about Sharpe: “Birthed by mouth in the year 2005, young Edward Sharpe had to wait nearly two years before he was to grow his arms and legs and fingers and toes.

“Immaculately conceived, his father (a robot who had magically become a real boy ... but that’s another story) declared his undying devotion to the creature. He perched the fleshy bust upon a teetering pedestal fashioned from stacked cereal boxes and positioned the display at his window for all the town to see. Young Edward soon proved no ordinary boy.

“Though his father had figured him deaf for his unresponsiveness to sounds, he in fact had the universally unique condition of being deaf from hearing too much or, more correctly put, too well. In plain words, he heard everything at once.”

Strangely, that bio sounds exactly right. The 12-piece ensemble’s shambling, trumpet, keys, and accordion-driven sound is irresistible! Hear for yourself when Edward Sharpe & the Magnetic Zeros plays Downtown Brew this Tuesday, March 2 (8 p.m.; all ages; $15 presale or $17 at the door).

Downtown Brew has a whole bunch of other great shows this week, but the music column space is so tiny in this issue that I don’t have room to tell you about them.
Check their website at dtbrew.com. 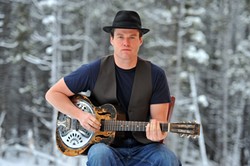 Call of the wild

If you like Texas troubadour-style narrative country, I have a feeling you’re going to love Gordie Tentrees, who rolls into town this Friday, Feb. 26 at The Clubhouse to promote his third album, Mercy or Sin, which was released earlier this month. What’s weird is Tentrees isn’t from Texas. He hails from the Yukon Territory, but his sound will remind listeners of folks such as John Prine, Robert Earl Keen, and Rodney Crowell.

One highlight of this show promises to be Tentrees prowess on the resonator guitar, from which he coaxes some amazing sounds. He may also have some Olympic tales for you, since his trip to our neck of the woods follows a three-day stint performing at the Vancouver Olympic Games’ “New Songs—New Voices” performance, which features Canada’s best songwriters.

“Ironically, I’m a former Golden Glove amateur boxer who spent 10 years trying to represent Canada at the Olympics, and now 10 years after retiring from the sport, I’m finally going [to the Olympics] to sing,” said Tentrees.

Three years ago he also quit an eight-year, full-time teaching career with special needs kids and teens to concentrate on touring, and since then he’s been playing more than 200 dates a year with his band.

If you like local act Café Musique, you’ve got to check out Fishtank Ensemble, who similarly works around the edges of Romanian, Gypsy jazz, flamenco, Balkan, klezmer, and tango music to cook up a spicy mélange of world music that transports listeners to a world of intrigue and magic.

You’ll feel like you landed in a Gypsy camp, gathered around a crackling fire while otherworldly musicians pied piper you into signing away your soul. And you’ll do it willingly because this is music to roast in hell for! 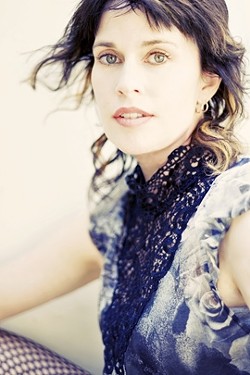 From French hot jazz to wild Serbian and Transylvanian gypsy anthems, flamenco and Fishtank originals, you’ll be amazed.Thornley in my side

From the opening track on Beth Thorney’s new CD Wash U Clean, I was already smitten. The Alabama-born, LA-based singer-songwriter can move from kittenish cuteness to disemboweling lioness in the space of a few bars. Meow!

I somehow missed her earlier releases, on which she was compared to everyone from Aimee Mann to Death Cab for Cutie to Ben Folds. Her sound has also been a favorite of TV, having appeared in episodes of Friday Night Lights, The Hills, Newport Harbor, Making the Band, Life, Jack and Bobby, Paris Hilton’s My New BFF, Everwood, Scrubs, and Beautiful People.

While her arresting, lilting voice is the constant thread running through her music, her sound manages to move through genres and influences without sounding disjointed.

“I like to write in a variety of styles,” she said. “As a piano-based singer-songwriter, it’s very easy to fall into all-too-familiar patterns, so I like to step into some different musical shoes for inspiration.”

Think of Citay as a guitar lover’s paradise, a group that takes cues from classic rock and fills its sound with soaring vocal harmonies. The group, with a new album to promote—Dream Get Together—plays the SLO Art Center this Friday, Feb. 26 (Call 543-8562 for details). On “Careful With That,” chugging guitars build to a crescendo of sound before settling down into a hooky jam band melody that will have heads bobbing and folks singing along to the chorus.

There’s a new venue for you music-starved folks in Morro Bay. For the last three weeks or so, The Fuel Dock’s been bringing in classic rock, blues, reggae bands and more, and this Saturday, Feb. 27, from 3 to 6 p.m., you should drop by and plan to get down to the sounds of soul, R&B, and funk act Lenny Blue and The Otter Guys. If you want live music, you’ve got to get out and support it!

Indie punk rock act Tan Sister Radio is gonna hit Frog and Peach like a bag full of sloppy, retro, garage fun this Sunday, Feb. 28 at 10 p.m. This show is free, and judging from the band’s Myspace page, awesome! Close your eyes and you’ll think it’s 1975 and you’re in CBGB’s.

Nashville singer-songwriter and Fantasy Records recording artist Raul Malo is bringing his killer voice and killer songs to the Templeton Performing Arts Center for an intimate solo acoustic performance on Tuesday, March 2. The former lead singer of the Grammy-winning alt-country group The Mavericks puts on a great solo show, so visit FiveSistersEntertainment.com and buy your tickets now.

Do it for Johnny

This Friday, Feb. 26 would be Johnny Cash’s 78th birthday, and the Cash family, Rick Rubin, and Lost Highway Records are encouraging everyone the whole wide world over to dress in black to celebrate.

“Since you are in a position to spread the gospel far and wide, we would like to ask that you help us get the word out in any way you are able,” wrote the record label. “This includes websites, social networking sites, Twitter, eblasts, radio/TV appearances, and most of all, having you wear black on Feb. 26 to remember Johnny and the voice he gave to the poor and beaten-down.”

Glen Starkey is sorry he couldn’t fit your show in this week’s column. Cry him a river at gstarkey@newtimesslo.com.

Jack Rose-—Luck In The Valley

The sun has set on another disciple of John Fahey’s school of American Primitive guitar. Jack Rose first gained fame in the drone/noise/folk outfit, Pelt. But since his first solo album in 2002, Rose registered an encyclopedic knowledge of pre-war American music in his unique arrangements, thoroughly investigating American blues, bluegrass, North Indian classical works, and experimental minimalism,. A heart attack cut short his talents on December 4, 2009 but his final recording, Luck  In The Valley, completes his “Ditch Trilogy” cycle and acts as a testament to his rising brilliance. Opening with the drone of an Indian raga, “Blues For Percy Danforth” gains acceleration like a steam engine, with a jaw harp and harmonica offsetting the non-Western guitar tuning. “Lick Mountain Ramble” is a boot heel stomping bluegrass while his version of W.C. Handy’s “Saint Louis Blues” sets his slippery guitar styling over a barrelhouse piano and blues harmonica. Gaining assistance from his compadres, the Black Twig Pickers, the album was captured live, often in one take. Luck In The Valley sounds immediate and warm, a perfect eulogy to this talented hand.

Sifting through Brazilian favela to locate records for his New York record shop, Tropicalia In Furs, Joel Stones decided to spread the love even further. Brazilian Guitar Fuzz Bananas is the sound of the São Paolo underground, a cultural retort to the oncoming military totalitarianism of Brazil in 1967. The music here shies away from the familiar, covering 16 hand-selected, progressively experimental and obscurely wonderful seven-inch singles that sound descended from Thirteen Floor Elevators’ acid haze. Celio Balona’s “Tema De Batman” circles the Batman theme as the cap-crusader gets rocketed to Mars. The Beatles’ “I Wanna Be Your Man” get fuzzed and funked out by The Youngsters, where the slyly-titled “Lindo Sonho Delirante” by Fábio sneaks in drug references while splashing your ears with wavering distillations of sunny, psychedelic beauty. With modern musicians from Beck to Devendra Banhart peeling apart tropicalia for influence, this is a choice selection curated by a master of the genre.