Looks like the haters can blame this one on the valley.

Officials overseeing the California power grid reported heavy pressure on energy resources as a result of an enduring triple-digit heat wave in the Central Valley. 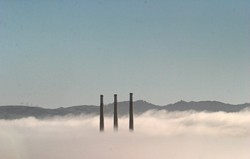 # The ceaseless whir of millions of fans and air conditioners in the inland basin on July 24 triggered a record consumption of 50,269 megawatts, according to the California Independent Systems Operator (CISO). To avoid rolling blackouts, the agency cut power to large businesses that volunteered for an emergency outage in exchange for rate breaks. Classified as a Class 2 emergency, this policy only goes into effect when reserves drop below 5 percent.

The following morning, weather experts' predictions of a cool-down proved erroneous. The grid outlook soared by several hundred more megawatts, which might have caused the first blackout wave in California since the 2001 energy crisis. Fortunately, the actual numbers came in just low enough to avoid blackouts and a second-consecutive day at Class 2.

Regardless, the death toll unofficially attributed to the heat wave climbed to 57 by July 26. Transistor failures also left dozens of communities without power for several days, and some counties saw more than 1 percent of their livestock die.