Brent Dickinson, Babbling Objects: An Indoor Earthwork will be on display from Nov. 8 through Dec. 5 at Cuesta College's Harold J. Miossi Gallery. A performative lecture will take place on Nov. 6 from 7 to 8:30 p.m. An opening reception will be held on Nov. 8 from 4:30 to 7:30 p.m., with an artist's talk in room 6304 beforehand at 5:30 p.m. Visit cuesta.edu for more information.

The takeover was swift and all encompassing. Just like that, in 2017, Los Angeles artist Brent Dickinson went from being a solo artist to the resident artist of the Marcel Maus Hermeneutical Think Tank, which operates as a Deleuzean machine, working to interrupt, antagonize, and decontextualize Dickinson's solo work.

"This website has been taken over by the Marcel Maus Hermeneutical Think Tank," is what flashes on the screen as you enter Dickinson's art website. "The artist whose site this originally was has been given the gift of generative destruction."

Unsurprisingly, a lot of Dickinson's work is inspired by situational comedy. He likens the Marcel Maus riff to a sort of process of cryptic fiction.

"It's a massive project that's continuing to be ongoing," Dickinson said. "The concept is that it's an organization that hacked me, that's outside of me, and now I'm deep inside of it. It's kind of fake news or [Kellyanne] Conway's alternative facts. It allows me to create meaning. It came about through my interest in developing a more immersive platform."

Dickinson's multidisciplinary work will be on display at Cuesta College's Harold J. Miossi Gallery, Nov. 8 to Dec. 5, as Brent Dickinson, Babbling Objects: An Indoor Earthwork. Dickinson has performed and displayed work at the Essi Museum in Vienna, the Socrates Sculpture Park in New York City, and the Cornerstone Music Festival in Chicago. 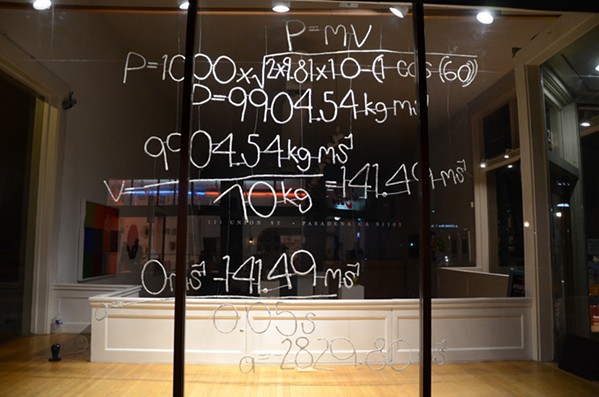 Dickinson initially studied painting and drawing as an undergraduate, but then moved on to working with other media, like sculpture, sound, performance, and video editing.

"I wanted to get more conceptual as well as personal," Dickinson said. "I couldn't figure out a way to do that with painting."

One of Dickinson's pieces, Rock Face, features fake rocks affixed to a wallpaper background of a scenic landscape. Different voices come out of each rock, giving voice to an interpretation of the objects, and illustrating the show's name. Another source of inspiration for Dickinson is Christian theology. Rock Face is a nod to the biblical story about the tower of Babble, where God made everyone speak a different language so people couldn't work together to build a tower tall enough to reach heaven.

"It's one where there's equal amounts of confusion and delight," Dickinson said.

Dickinson comes from a long line of ministers, and he also studied theology.

"Most of the projects have some hook into Christian theology or culture that plays into the work," he said. "I'm looking at those things not so much as sources of content but the way those end up having complicated dynamics between them. It's the sparks that are produced between them that I'm interested in."

‘I wanted to get more conceptual as well as personal.’Brent Dickinson, artist tweet this

Some of Dickinson's other pieces include photos of complex equations scribbled on buildings, phallic shaped carrots, and live performances. While Dickinson said that the meaning of his work is open to interpretation, he hopes viewers take the time to think about his pieces.

"There's a hope that the viewer engages with these things that are pregnant with meaning," he said. Δ

This newspaper has been taken over by the Shredder Corporation. Send comments via Arts Writer Ryah Cooley at rcooley@newtimesslo.com.