A local conductor gets screen time in The Soloist 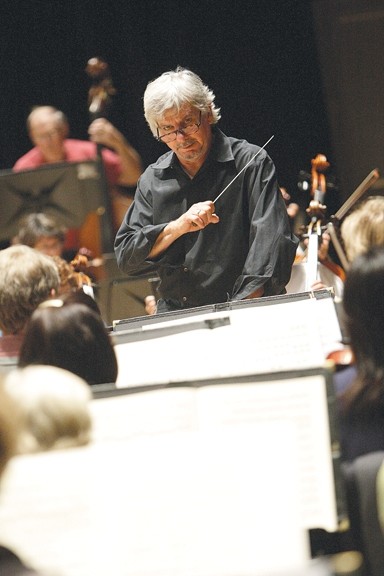 Merriam-Webster defines a soloist, simply and not unexpectedly, as one who performs a solo and a conductor as the leader of a musical ensemble. Not to be confused with the composer, a person who writes music. For Michael Nowak, Music Director for the San Luis Obispo Symphony for the past 25 years, these terms are elementary workaday phrases. But when applied to his other career, three to four hours and 200 miles south, they take on a new luster.

Nowak has worked with the Hollywood film industry for more than 30 years, initially playing the viola in movie soundtracks before transitioning to conducting. On April 24, he made his nationwide debut in a different role altogether—that of actor. But that doesn’t mean that he’ll be stepping off his podium. In Joe Wright’s production of The Soloist, starring Jamie Foxx and Robert Downey Jr., Nowak was tapped to play the role of a harsh ’70s Julliard conductor.

While Nowak was conducting a film soundtrack in Los Angeles, the music contractor approached him with an audition offer. Wright had seen a photograph of Nowak and, according to Nowak, “liked the look of him.” He was invited to read for the part of the conductor. The film was the true-life tale of a musical prodigy (Nathaniel Ayers, played by Foxx) afflicted with schizophrenia and the Los Angeles Times columnist (Steve Lopez, played by Downey Jr.) who befriended him and shared his story with the world. The audition was successful.

“The conductor has no name,” Nowak explained his role. “He’s not Mr. Anybody. He’s just a Julliard conductor. My research was to talk to my friends who were at Julliard in 1970 and 1971 to see what kind of person the conductors were and they were stern. They were not nice folks. They were demanding, uncompromising, and at times, belittling and arrogant.”

Part of preparing for his role meant adjusting to the idea that his purpose was not to create the best possible music while maintaining a positive relationship with his musicians; instead, it was Nowak’s job to be exacting, and even cruel. And to remember his lines, of course, an ambition made all the more difficult by the fact that the film’s writers didn’t have an accurate sense of the jargon utilized during a music rehearsal. Some lines he was able to alter, others remained as originally written. He rehearsed with his daughter in the month leading up to filming; she read Foxx’s lines.

The crew filmed Nowak’s scenes in April of 2008, during a blistering Long Beach heat wave. But because the flashback was set in New York, in November of 1971, attire consisted of turtlenecks, scarves, jackets, sweaters, and as much wool as the costume department could acquire. In addition to remembering lines, Nowak was tasked with guzzling water and preventing sweat from destroying his makeup.

“I was overwhelmed by being so close to Jamie Foxx because he’s such an outstanding actor and he really did a tremendous job playing the role,” said Nowak. “But most of it was tedious, moments of doing the same line over and over and over, somebody comes in and moves a chair or someone says ‘here, move a little to the left.’ And then you had to do it all over again. They filmed behind us. The next day they filmed from the orchestra shooting right at me. Another time they had a camera right behind Jamie Foxx shooting up at me. I mean, they probably had 10, 15 angles of direction.”

One day, when Foxx was late to set, the director asked Nowak and   the assembled orchestra to play something; Nowak conducted the first movement from Beethoven’s Third Symphony, to the director’s delight.

The Soloist was originally slated for a November release and Nowak hadn’t seen his own scenes until the film was released five months later than planned, this month, but he was fairly confident that he wouldn’t wind up on the cutting room floor, like so many before him. His scene, depicting the moment when the voices in Ayers’ head overcome the music he attempts to create in rehearsal, was simply too important.

It all began, innocently enough, with a stint with the Los Angeles Chamber Orchestra, which also served as a talent pool for the film industry. Then, a friend, and conductor, from Dallas contacted some friends in Los Angeles and ordered them to hire Nowak. Word of mouth served its function and 30 years later Nowak finds himself turning down projects for lack of time. John Williams, Steven Spielberg’s go-to composer, is among his favorite collaborators and Nowak acknowledges that each film is a unique experience, often shaped by the composer’s relationship with the director.
As a general rule, Nowak meets with the composer prior to recording. They discuss the role of the music within that particular film, an assessment that Nowak must then translate to his orchestra. Sometimes the entire process is a mere day. Sometimes two. Or a week. Or two. Some directors are more hands-on, evaluating and re-writing at each phase of the process, drawing out the experience. Nowak likes working with Williams because directors have so much respect for the composer that they tend to take a more hands-off approach.

By the time Nowak enters the picture the film is complete and he watches the freshly born piece as he leads his orchestra, the timing excruciatingly precise. Though there are significant differences between a symphony performance at the PAC and recording with a foreign orchestra, Nowak doesn’t have to work very hard to imagine an audience of eager listeners. Between a 20-person camera crew and a set crew of equal number, the orchestra is never without its audience.

Commuting is not without its challenges, particularly in an industry that needs its talent today one moment, in a few days the next, and yesterday a mere second later. Booking hotels and charting the City of Angels’ infamous freeway system is far from simple, but it’s a price that Nowak is willing to pay to create music for the big screen.

“It’s a crazy thing if you want to live outside the Los Angeles area,” he admitted. “Which I do. And I love being in San Luis Obispo and directing with the symphony here but I do love that other life as well. I love making music for the movies. I think it’s one of the most important aspects of the film industry.”

Arts Editor Ashley Schwellenbach has never been a huge fan of angels. Invite her to Los Libros at aschwellenbach@newtimesslo.com.