They're hairy, angry, happy, confused, and about a hundred other descriptives besides. And starting Feb. 13, Cal Poly’s Gender Equity Center will be giving voice to the arguably voiceless.

Cal Poly’s annual performance of The Vagina Monologues takes special care to make the show a life-changing event for its viewers, and perhaps even more so for its performers.

“We try to make sure that it’s a huge experience for the cast members, outside of just going up on stage,” said Tammie Velasquez, Poly’s Gender Equity Center coordinator and Vagina Monologues production co-leader. “We have a retreat for them, we have a read-through, and the directors do workshops with them so they’re getting the most out of it. It’s really a journey of empowerment and healing.” 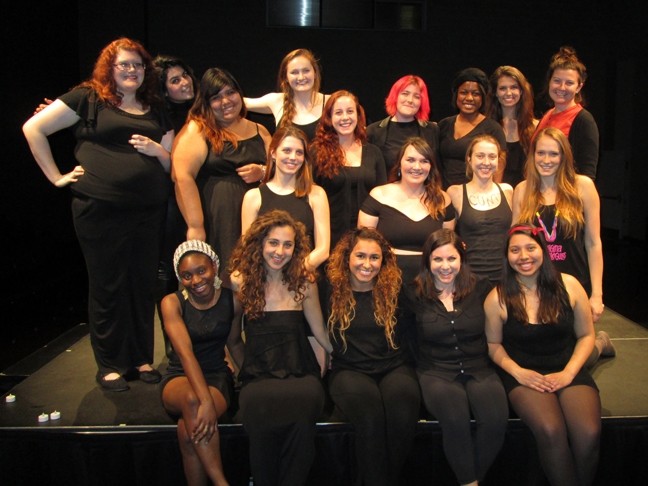 The Vagina Monologues—written by Eve Ensler and first performed at the Off Broadway Westside Theatre in 1996—consists of a series of monologues performed by different actors, each focusing on various aspects of the feminine experience.

“It is, what I like to call, the ‘gateway drug’ to feminism,” Velasquez said. “Even though it’s a little bit of an old-school play, it touches on a lot of the things that intrigue and open the minds of people—especially women. I think the women that decide to partake in The Vagina Monologues have a different journey  with it than the people that are just watching it.”

Though the Cal Poly Gender Equity Center puts special emphasis on the experiences on the show’s performers, Velasquez said that the show can be  just as liberating for viewers as it is for the actors.

“It’s one of those things that’s such a taboo subject,” Velasquez said. “It’s really funny, but it’s kind of embarrassing; it teaches the audience that it’s OK to talk about the issues that come up in the  show like sex, relationships, abuse, women saying ‘yes,’ women saying ‘no,’ stuff like that.”

This year—for the first time in the show’s 12 years at Poly—the show will also be performed completely in Spanish, in addition to the usual English production.

“I saw the need on this campus to make a statement—since Cal Poly can be known for not being the most diverse institution,” Velasquez said. “Sometimes I think that students of color feel very marginalized, since not much on campus is catered to them.

“A lot of the topics covered in The Vagina Monologues are extremely taboo, and when you add cultural expectations—specifically with Spanish-speaking cultures—it’s like, tenfold greater than the typical Americanized taboo issues. I think that sometimes, different communities need to hear that a little bit more. So we wanted to make sure to make it easily accessible for individuals that come from backgrounds where you’re not supposed to talk about this stuff, to say that it’s OK to talk about it with your families and your friends.”

Proceeds from the show will be split between three organizations that provide services, resources, and support for the county’s women and girls: Poly’s Gender Equity Center, SLO’s RISE, and Girl Circle.

Cal Poly is just bursting at the seams with events this month. All throughout February (and the beginning of March), the school is hosting a series of religious talks called Perspectives on Religion and Society. Each of the three talks in the series focuses on looking at one of the “big three” religions from a new perspective. The first was called Kabbalah: The Mystical Path of Judaism and took place on Feb. 10 (sorry if you missed it). The second is called Gay With Jesus: Toward a Homosexual Christianity, and will he held on Feb. 17 in the business building rotunda on campus. The grand finale of the series is ISIS: Islam, Violence, and America’s Role on March 5, also in the Business Rotunda. The series features a number of expert speakers and panelists, and is being sponsored by the Cal Poly Philosophy Department. Each one is  open to the public.