The general population doesn’t necessarily frequent art shows on the regular. As a young artist, Robbie Conal picked this tidbit up pretty quickly and decided to take his art where the people are: the streets. 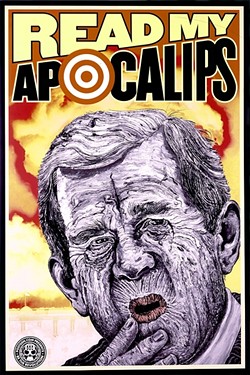 From the mid 1980s and onward, satirical posters of Ronald Reagan, George W. Bush, Mitt Romney, Arnold Schwarzenegger, and others have been smattered all over the Los Angeles area. But putting a poster wherever you like isn’t always legal: Conal has been arrested multiple times for his art, but it doesn’t bother him.

“My concept of the way the art works is between the time you see a piece and when you think you’ve got it figured out, you’re mulling it over, and if I’ve got you thinking about it, then I’ve done my job,” Conal said.

Now in his 70s and living in Los Osos, he is still inspired by the politicians whose actions haunt him. Conal’s exhibit, So Many Bad Guys, So Little Time: Robbie Conal’s Satirical Street Posters (Plus a Dozen Knuckleheads) is currently on display at the Harold J. Miossi Art Gallery at Cuesta College. The exhibit is busy, popping with color and details, leaving the eye no time as it jumps from piece to piece.

One poster features a haggard black and white oil painting of Reagan, with the word “Contra” at the top and “Diction” at the bottom, a reference to the Iran-Contra affair. Another shows a devilish looking Arnold Schwarzenegger with red eyes. “Achtung Baby!” is scrawled in red gothic script. At the bottom of the poster is a quote from the governator himself—from his pumping iron days—that reads: “I was always dreaming of very powerful people, dictators, and things like that.”

Not even Democrats are safe from Conal’s guerilla art warfare. A black and white poster of a grinning President Barack Obama has the word “Climate” in red letters at the top and “Change” in blue letters at the bottom, a play on Obama’s campaign for change in the country during his first presidential election in 2008.

A series of 12 paintings stands out from the rest: the knuckleheads. They are a group of cheeky skeletons emblazoned with glitter and their own unique characteristics like a Giant’s baseball hat or the signature Wonder Bread polka dots and single word phrases like “kvetch,” the Yiddish word for complaint.

“They’re a relief,” Conal said of the knuckleheads. “George Bush, Dick Cheney; I spend a lot of time with them. Satire is inherently negative, it’s a criticism. It’s toxic, even though it’s cathartic, at 2 or 3 in the morning I go, ‘I’ve had enough! I’m going to do some grinning skulls with glitter.’”

Conal also looks to his cats or his favorite bird, the owl, as inspiration when he needs to make some happier art. Right now, he’s working on a very current and steadily rising political figure: Republican presidential candidate and business tycoon Donald Trump.

“My idea about making art is by any means necessary. Whatever you need to do to express whatever you’re compelled to express,” Conal said. “It’s really not telling people what to think. It’s kind of tickling people into thinking about things.”

Ryah Cooley says “Damn the man, save the empire,” at rcooley@newtimesslo.com.