I met Los Osos author and songwriter Jon Stebbins when we worked at the same record store in the '90s. In between deepening my knowledge of music, he'd regale me with tales of his late-'70s and '80s band The Point, which enjoyed a long run in LA as part of the Paisley Underground. The band's 1983 album, Magic Circle, is considered a classic of the subgenre, which is a sort of psychedelic garage rock revival sound. 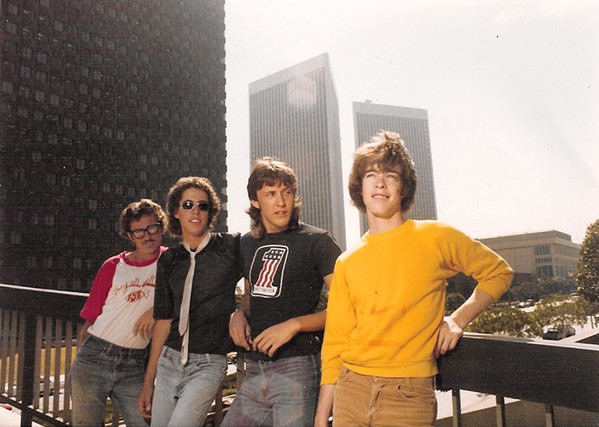 He and his old bandmate, Tom Alford, recently reteamed to write a new song, their first collaboration in 34 years, which they've released on a three-song EP called Moving into Love, which is also the EP's title track.

"Tom Alford and I knew we had a musical connection when we saw each other standing in line to see A Hard Day's Night in 1964," Stebbins said. "We were in first grade at the time. By the fourth grade, we were regularly playing guitars together and even attempting to write songs. Our first band, Rock Bottom, played gigs beginning in 1972. Eventually we formed a more noted band, The Point, after moving to Los Angeles in 1978. By 1985, The Point had disbanded. Tom kept cranking out great music and released several excellent solo CDs."

Stebbins eventually married, raised a family, wrote the aforementioned books, and "occasionally" plays his guitar for fun. He thought his songwriting days were behind him.

"Earlier this year, Tom called me and asked if it would be OK if he recorded 'Moving in to Love.' My reply was, 'What's that?' He explained it was a song we had written together back in 1986. I'd completely forgotten the song, but when he sent me his demo, it all came back. It was a song I'd written about a recent and painful breakup. I'd been drifting, and Tom invited me to come live with him while I healed. He and I finished the song together back then, but when we parted ways, the song disappeared from my memory. Somehow, after 34 years had passed, Tom still remembered the song, every note. This was a gift beyond words for me."

Alford and his band—drummer Jerry Phillips, harmonica player Doug Dahlstrom, and vibist Brad Barth—recorded the song, and now it's showing up on radio stations worldwide!

"Tom and I are now writing songs together again, and all I can say is, 'Thanks, Tom,' for bringing 'Moving in to Love' back to life," Stebbins added.

The EP also features one of their new collaborations, "Sizzle," a bluesy garage band rave-up. Alford's "Nothing Comes Between Us" closes the EP. Alford calls the song a "Cheap Trick/Pretenders-style new wave rocker." As for "Moving into Love," the song's super cool, surrealistic, and well produced. Alford calls it a Phil Spector-style production, and it's groovy as hell! All songs are available on all the major platforms. Check it out!

This Saturday, Dec. 12, the Clark Center will continue its Winter Date Nights Series with a concert by Bay Area virtuosic bluegrass act Dirty Cello, which blends blues, bluegrass, rock, world music, and more into a tasty foot-stomping sound that'll get you off your couch. 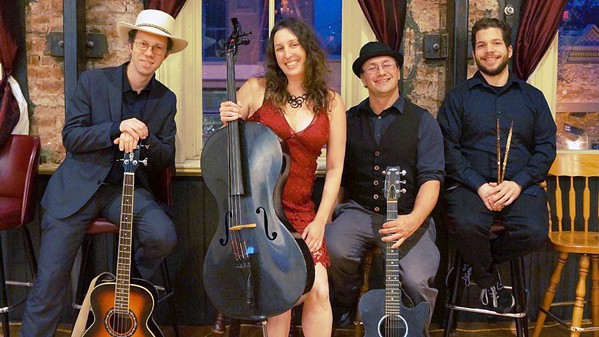 Fronted by the vivacious cross-over cellist Rebecca Roudman, the band has played from China to Iceland and all over the U.S. They've been through the Central Coast a few times, and they put on a terrific show. The concert runs from 6 to 7 p.m. on facebook.com/ClarkCenter/ and youtube.com/user/clarkcenterperfarts. All donations are split equally between the band and venue. Δ