On Saturday morning Jan. 12, the welcome center at the El Morro Church of the Nazarene is buzzing with the sound of sewing machines. The center is filled with big circular tables where women cut fabric, measure it, sew it, or sort it. At about six to seven stations total, each woman plays a vital role in making reusable hygiene kits. 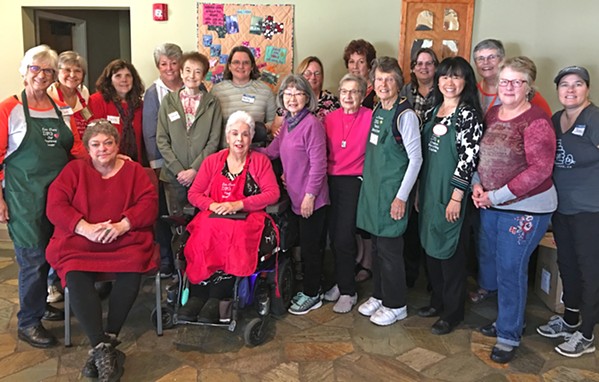 Jan Northington orchestrates it all. She's the head of the Los Osos California team, a chapter of the international Days for Girls organization. The nonprofit has teams all over the world that gather to create washable pads for girls in impoverished countries who do not have access to feminine hygiene products.

Instead of supplying girls with feminine products that will eventually run out, the organization thought of the reusable substitute. The teams assemble these kits and either mails them to the Days for Girls headquarters in Washington, D.C., which will send them to young females in need, or team members can go on their own trips to deliver the product.

In the welcome center, Northington said, about 20 to 25 women meet every two to three months for six hours to make as many kits as they can. Some of the women will take whatever doesn't get finished home to work on.

The kit consists of a guard that goes on the crotch of the underwear with an insert for a flannel liner made out of 100 percent cotton. Each kit has one guard, eight liners, two pairs of underwear, a washcloth, and bar or two of soap. There's also an instruction sheet on how to use the guard and liners as well as a calendar for tracking the menstruation cycle packaged inside a drawstring backpack.

Aside from giving the reusable pads, the girls are also given menstrual health education.

"The whole idea is that the girls receive education as to how their bodies work and why they're bleeding because in most of these countries, they don't know," Northington said.

Northington has taught girls herself and said that the international organization gives them informational documents, diagrams, and a large presentation board so they can show the girls how their bodies work, the female reproductive system and the male's. She also encourages the girls to understand their self-worth.

"I have talked about, 'You have the right to say no,' the right to stand up for who you are. In so many of these places they don't feel like they're worthy, but I believe this is helping them feel more valuable," Northington said.

Days for Girls International has reached more than 1 million women and girls in more than 125 countries. Northington found out about the international organization's efforts through a trip with friends to Uganda.

"I'm an old registered nurse, retired, but I've always wanted to go to Africa and help," she said.

During the trip, one person brought along Days for Girls kits to distribute to girls in need. After that first experience, she knew it was something she wanted to bring to the Central Coast. She started it with a friend in 2013. The following year, the local team made 426 kits. Last year, the team made 705 kits to distribute. She said her team doesn't normally send kits to the headquarters because some of the women like to distribute the kits themselves.

All of the kits were made possible with community donations of 100 percent cotton material, with the exception of a few purchased items.

"It's very rewarding because I see such light bulbs go off around the world with both women and kids who never understood how their bodies work," she said.