Much-discussed plans to open a dog park in the Los Osos Community Park are on hold—likely for another year—as SLO County and the U.S. Fish and Wildlife Services complete a Habitat Conservation Plan for the seaside community. 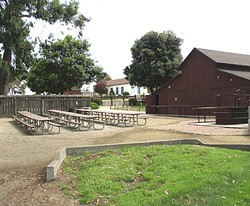 Last year, the Los Osos Community Services District (LOCSD) and county agreed to write a lease that would allow the LOCSD to open a dog park in a grassy area of the county park on Palisade Avenue. Originally slated for development as tennis courts, Los Osos leaders felt a dog park would deliver an unmet community need using a smaller footprint.

"The county doesn't have the funding for tennis courts anyways, not to mention the [environmental] mitigation of putting tennis courts there," LOCSD General Manager Renee Osborne said. "[A dog park] is fencing and that's it."

But even installing fencing is off the table until Los Osos gets a Habitat Conservation Plan—a document required by the Endangered Species Act to guide new development in the environmentally sensitive town of 15,000 residents. Endangered species in Los Osos include the Morro Bay kangaroo rat, Morro shoulderband snail, and Indian Knob mountain balm.

Kerry Brown, a county planner, said that she anticipates submitting a draft of the habitat plan to Fish and Wildlife in June—but she said the hearings to adopt a final version won't likely occur until 2019.

Brown noted that Los Osos is unique in that it needs a community-wide conservation plan.

"This is the only Habitat Conservation Plan that I'm aware of [in the county] that covers a whole community," she said.

Once the plan is finalized, the LOCSD can then apply to the county for a permit to establish the dog park. The district hopes to partner with a local nonprofit organization to build and operate it.

The dog park efforts coincide with SLO County's larger goal of bringing Los Osos out of the building moratorium that's been in place since the 1980s. With a new wastewater treatment plant up and running, the county is pushing forward on the habitat plan and a new Los Osos Community Plan—two policies that could lift the decades-long restrictions. Δ

Clarification: This article has been edited to clarify that the Los Osos Habitat Conservation Plan is the only community-wide plan in SLO County.