Los Osos looks at options for a new library

The future location of the Los Osos library is still being discussed as SLO County officials gather community input, and a potential parcel tax could help fund this and future library capital projects. 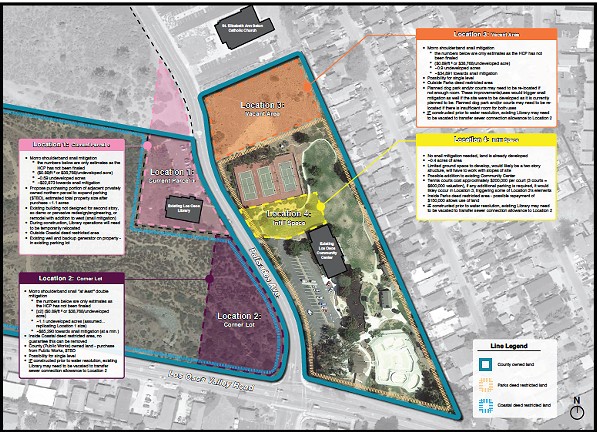 At a Nov. 4 community workshop, Christopher Barnickel, the county's director of libraries, said that library administration was hoping to get feedback on the community's preferred location for the facility.

"We're going to take that information, go back in December, and start looking at what it is that people in Los Osos value in their community so that the architect can start building a program of what that building looks like," Barnickel told New Times.

He said the library administration hopes to narrow down the scope from four locations to one or possibly two sites by next month with the approximate respective cost estimates, which officials don't have at this time.

Currently, the proposed locations include the existing Los Osos Library facility, which isn't designed for a second story, so a complete redesign or extension of the facility would be necessary. In that location, potential impacts to the endangered Morro shoulderband snail would need to be mitigated at a cost of $23,000.

The second potential site is on the corner of Los Osos Valley Road and Palisades Avenue that has double the snail mitigation needs and cost. It's owned by SLO County Public Works, so the parcel would need to be purchased, according to county documents. Locations three and four are also on Palisades Avenue. One would need snail mitigation estimated at $35,000 as well as the potential relocation of an existing dog park and tennis court. And the other site is next to the existing Los Osos community center with limited space for development and would likely be a two-story facility.

Traditionally, capital costs for new facilities are funded in part by the community, in this case Friends of the Los Osos Library, and the county. The county's half of the funds are currently generated by public facility fees, which bring in about $250,000 a year, Barnickel said.

Although he couldn't tell New Times how much a project like this could cost, he did say, "Our most expensive project to date, within the last seven years my time being here, has been right around $4 [million] to $5 million."

Friends of Los Osos Library is close to hitting the $2 million mark through its fundraising efforts, but he said the group still has a ways to go.

To aid in paying the cost of this project and future capital improvements to libraries throughout the county, Barnickel said library administration is considering a library bond measure for the November 2020 ballot.

On Oct. 22, he received the SLO County Board of Supervisors' approval to hire a consultant and conduct a feasibility study to gauge the community's interest in a bond measure. The proposed countywide parcel tax would be $3 a parcel per each $100,000 in property value, which could generate approximately $25 million in bond proceeds.

Barnickel said the library will bring the results of the feasibility study back to the SLO Board of Supervisors in December. Δ