At about 11 a.m. on a Tuesday in Aimee Burrus’ sixth-grade Los Osos Middle School class, the words “bridge builder” were projected on a screen at the front of the room next to a countdown timer.

Outside, students formed small clusters of two or three each, stretching out on steps and lunch tables, casually pecking at their laptops. But inside, Burrus walked from table to table, where groups of kids were furiously trying to build a bridge, solely out of paper.

“What you don’t want to forget is think creatively,” Burrus told the class. “Think outside of the box.”

At one of the tables, four girls—Brianna, Mandy, Dylan, and Maia—were meticulously folding sheets of paper into rectangular boxes and stacking them in a symmetrical arch. Their goal was to build a bridge able to support the most weight. The group called itself the “Black Panthers.”

“[Burrus] lets us go on our own and challenges us to build a bridge without tape,” Brianna said.

Another group of four boys in the far corner—Bryan, Richie, Jett, and Jesse—dubbed their team “Operation Chaotic Cheesecake.”

They sheepishly placed a weight on the bridge, then cheered when it held up. “Nailed it!” a student yelled from another table across the room.

The first part of the assignment had the students following a blueprint, but many seemed more excited to try out their own ideas.

“I like it better, what we’re doing right now,” Bryan said.

Burrus has been teaching since 2001, but is currently in the first year of teaching under the new direction of the school’s recently funded Science, Technology, Arts, and Mathematics (STEAM) program.

“It’s exceeded my expectation,” she said.

The STEAM program has received a funding allocation from the San Luis Coastal Unified School District of $160,000 for the first year, followed by $125,000 each for years two and three. The idea was to begin with the school’s sixth graders, then continue the STEAM education program through their seventh and eighth grade years, and eventually through to Morro Bay High School. 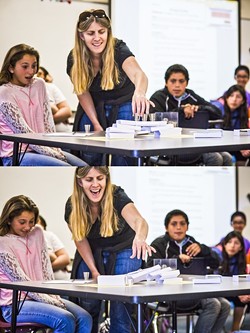 Programs like STEAM are sometimes viewed as traditional school with some extra technology thrown in. But for Kyle Pruitt, the school’s principal at the time of New Times’ visit, STEAM is a new way of teaching kids how to think and utilize all the tools available in a rapidly changing world. And from what he and other teachers have seen, it works.

“The kids get it,” he said. “The kids are way more engaged.”

Access to information online is so ubiquitous that programs like STEAM are geared toward teaching students more than simple facts and date memorization, but how to digest information and repurpose it in their own creative work.

“One of my funny kind of mantras has been, ‘If it’s Google-able or Siri-able, you don’t need to teach it in class,” Pruitt said.

In fact, with STEAM, the school is moving toward an all-Google platform, which gives students and teachers the ability to work remotely and in real time.

Burrus, for example, has a STEAM website that allows students to submit assignments and access features such as a science tab, where she has posted images of the Grand Canyon and asked students to submit answers based on the question: “How do you think these layers were formed?”

More so than in her previous years as a teacher, Burrus’ students really enjoy coming to class, she said, and many are sad when they have to miss a day of school. In her first year overseeing a STEAM classroom, she said she spent less time lecturing than in any previous year as a teacher.

“I’m not the one giving them the answers anymore; I’m asking the questions,” she said.

This was the same reaction from Ken Hotaling, who’s been a sixth-grade teacher for about 16 years. On a whim, Hotaling offered to take New Times over to the school’s former shop class, now a maker space.

As kids began to flood the school’s outdoor hallways for the lunch hour, Hotaling greeted them casually. He wore a shirt with the words, “What will you create today?” On the way to the maker space, a young girl approached to give him a high five.

With a background in traditional teaching methods on subjects that ranged from science to history, Hotaling said the STEAM program has him “teaching things at a sixth-grade level that I never thought were possible.”

Direct instruction can be handled before class through a wiki or podcast, for example, while class time is most often centered on a cornerstone project aimed at helping students absorb material on a variety of subjects, and then applying the lessons learned to their own projects.

As of the close of the 2013-14 school year, Los Osos Middle School had finished the first year of STEAM, beginning with sixth graders. During that time, school officials prepared seventh-grade teachers and classrooms for the STEAM program, and this coming year new sixth graders will also shift into a STEAM curriculum, as the eighth-grade program is created.

Pruitt compared the program to building a track in front of a moving train, setting the foundation to continue STEAM education while creating infrastructure for younger generations of students.

“We are training them for jobs that don’t [yet] exist,” Pruitt said.