If you haven’t been following Spike TV’s Tuesday night reality show Frameworks, you should, especially if you’re into design, furniture, innovation, and snarky contestants crowing about how much better they are than their competition. Among the braggadocios is mild-mannered, laidback Los Osos surf dude Jory Brigham, whose designs have been wowing the series’ judges, including lead host, actor, and rapper Common.

How did Jory end up in this monkey house of egos? 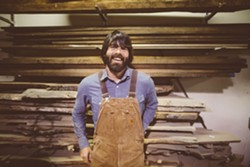 Jory’s father was a finish carpenter and architect and, in fact, that whole side of his family—uncles, cousins, grandfathers, and great-grandfathers—were all carpenters.

“I saw my dad build houses from the ground up, everything from kitchen cabinets to kitchen counters to even the furniture inside the houses,” the bearded and lanky woodworker said in his SLO Town shop.

Building and design is in Jory’s blood, and after growing up in Hawaii, Jory—now 35—moved to California at 18 to join his uncle making furniture.

“It wasn’t really my passion. I was just making money, but then I designed my own piece and I saw it in the window of my uncle’s shop and that sort of fired me up. I thought, ‘Man, maybe design is my passion.’”

He got his big break when Fess Parker—of Davy Crockett fame—saw Jory’s work and hired him full time to be his family’s personal carpenter.

“He said, ‘Move here and I’ll buy you all the tools and set you up with a house and a shop.’ I worked on his son Eli’s house and their winery.”

Suddenly, Jory had the freedom to design and experiment and, more importantly, to teach  himself more about building and design. Eventually, in 2008, he started his own company, Jory Brigham Designs, focusing on his current style.

“Having the freedom to do whatever I want … it just feels healthy,” he grins.

But what exactly is his “style?”

“I’ve been asked that a lot and I still don’t have a good answer, and I’m fine with that. When you put someone’s work into a category that means it’s capable of going out of style. I want to create things that feel timeless. When something gets hot, people start jumping all over that style and building the crap out of it. I try to be subtle, and people have commented they’re drawn to the warmth and the lines of my designs.”

Has anyone ever tried to capitalize on Jory’s style or copy his techniques? 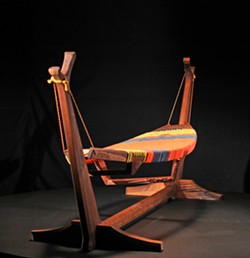 “I’ve had people try certain things, like creating this texture,” he says, gesturing to the undulating surface of a cabinet door. “People have used CNC [computer numerical control] machines to try it, but this is all hand carved, and using a computer takes the soul of out it. There’s a place for CNC machines, but a lot of people like the inconsistencies that come with doing it by hand.”

Jory’s entire construction and design philosophy seems anathema to CNC machines. His shop only manufactures about six or eight finished pieces a month.

“So many people are doing CNC. China’s doing it. Can we compete with that? Not really. And I don’t want to compete with someone who’s whipping out cabinets. For me, I want each piece to reflect my own style, so when someone sees it, they know, ‘Oh, that’s something Jory did.’”

So how did he hook up with the Spike show?

“They called me up I think in May or June of last year and asked if I was interested. I did a Skype interview. At first, I was a little leery. It was the first season, and I had no idea what it would be like. I thought this show could make me look like a total ass,” he laughs. “And they said I might be gone for as long as nine weeks, which seemed like a long time to be away from my wife and kids, but my wife was really supportive, and I went down to L.A. and did a couple face-to-face interviews.”

“It was either that or let the show come up with an outfit. That’s dicey!”

The show features 13 designers and builders from throughout the U.S., who, in classic reality show style, are all sequestered together in a swank L.A. loft.

Each week, they’re given a challenge. The first week, they had to reclaim all their materials from derelict boats in a boatyard. Jory did well, creating a child’s chair, but an egotistical contestant named Freddy Hill won.

The second week, they were paired in teams and had to create a ping-pong table, and as winner, Freddy got to pick the teams. He picked Jory, and they easily won.

In the third week, each contestant was given one specific material to work with: PVC pipe, metal lunch boxes, forks, CDs, copper wire, chain link fence, etc. Jory got multi-colored bungee cords, made a gorgeous hammock, and he won.

The most recent episode came out after this story had been written, but the builders were once again paired up, this time Jory deciding the teams and tasked with designing an “innovative” entertainment center.

As you’d expect, there’s drama, tears, and more than enough animus thrown around by the contestants to keep things interesting. Some of the designs produced are amazing, others spectacular failures.

The first season has six more episodes before the winner is revealed. Jory knows the outcome but has been sworn to secrecy. Whoever the big winner is will receive a $100,000 cash prize, $20,000 worth of tools from Ace Hardware, and a display spot in CB2 stores.

Whether he wins or not, Jory’s made such a good showing thus far, he’s expecting a spike in business and is thinking of adding a third person to his two-man operation with Tyler Wohlford.

“I’d rather be over prepared than under,” he says, “but I don’t want my expectations to be too high.”

Looking at the quality of his designs, it looks like the sky’s the limit for this artisan.

Glen Starkey is a New Times staff writer. Contact him at  gstarkey@newtimesslo.com.