Is Los Osos finally ready to break out of its 32-year-old building moratorium?

That is a debate playing out right now—with some groups expressing serious doubts—as the San Luis Obispo County Board of Supervisors gears up to review and possibly approve a long-awaited Los Osos Community Plan on Dec. 15. 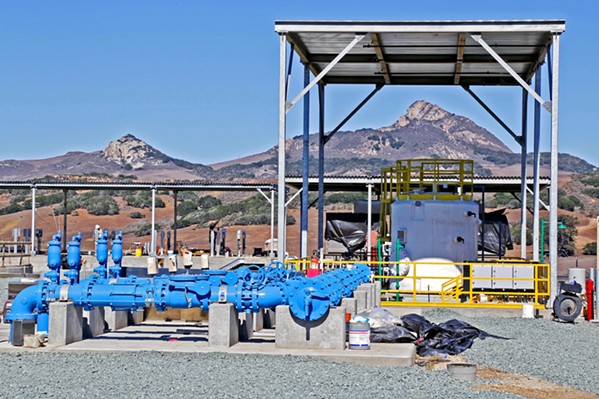 Eight years in the making, the plan charts 20 years of growth in the bayside community, lifting a decades-long building freeze. It envisions about 2,000 new housing units and a population increase of about 30 percent, to 19,000 residents.

County leaders say that the plan responsibly manages the growth in accordance with ongoing efforts to stabilize the Los Osos Valley Groundwater Basin, the town's only source of water, which is threatened by seawater intrusion and septic pollution.

But some locals and environmental watchdogs are adamant that the plan is too much, too soon. Water purveyors are also expressing concern about their ability to serve additional customers.

"Approving a plan and trying to move ahead right now is not a sustainable thing to do. We can't do it," said Patrick McGibney, chair of the Los Osos Sustainability Group, a community nonprofit that's opposing adoption of the plan.

Recent Los Osos water quality metrics give valid reasons for concern. Measurements of chloride (seawater) and nitrates (septic pollution) in the aquifer have yet to reach the levels that officials would like to see. And in the case of seawater intrusion, the most recent data indicated a setback.

Deprived of growth since 1988, Los Osos hoped that its transition to a new wastewater treatment plant in 2015 would help solve its water woes and unshackle the town. But residents like McGibney point out that groundwater basins take years to recover and even longer to show reliable signs of stability. He and others are asking the county to play it safe and hit the brakes.

"We need at least five years before we start increasing our development to find out if the metrics are working," McGibney said. "Reports show we still have seawater intrusion coming in. This basin is the only one we have."

Officials like 2nd District Supervisor Bruce Gibson emphasize that the Los Osos Community Plan can be structured in a way that ensures development doesn't outpace water supply or overstress the basin.

Under a proposed timeline, in the first two to three years of plan implementation, only accessory dwelling units, affordable housing, and second story commercial conversions to residential can be permitted.

After that, it's a 1.3 percent per year growth rate for five years. Gibson said that the number is adjustable, though.

"As we get moving forward, we will monitor how the water supply responds. That's where adaptive management comes in," Gibson said. "We're going to grow at a rate we can monitor and adapt to."

Gibson said that, like others, he's also concerned about some of the recent water quality metrics. But he wants to keep a big-picture perspective about whether the basin is moving in the right direction, despite the yearly ups and downs.

"We need to look at the trends of this," he said. "We've had significant improvement in the metric of seawater, and now the past couple of measurements it's retreated some. The basin has to be sustainable over a long period of time. It has to be able to absorb year-to-year variations."

Meanwhile, the three Los Osos water purveyors, who are in charge of implementing a court-approved management plan to balance the basin, appear less than enthusiastic about serving new customers.

All three expressed uncertainty about the progress they've made recovering the basin and also cited the financial challenge of building the necessary infrastructure to support full build-out.

"The CSD is recommending that a very cautious and measured approach be taken when planning for new development to proceed," Los Osos CSD General Manager Ron Munds wrote in a June letter to the county. "The variables that can impact the groundwater basin health have been analyzed extensively, but it will take additional time to confirm if the trends are sustainable. The follow-up concern is the fiscal impact to existing customers, which will need to be addressed in front moving forward."

In a July 10 letter from the S&T Mutual Water Company, Vice President Chris Gardner stated that the firm is "cautiously optimistic" that the basin could become sustainable for "the current population."

"We do not believe these supplies to be sustainable now," Gardner wrote. "Progress is materializing, but we are fearful that 'turning on the tap' of development, without greater margins of safety, will lead to unnecessary harm and expense."

To these points, Gibson said that while the county has the land-use authority to adopt a community plan, it's ultimately the water purveyors' job to take the steps necessary to recover the water basin and serve current and future Los Osos residents.

"Do the water purveyors have the commitment to make the investments to secure the basin? That's their responsibility," he said. "I'm there to work cooperatively with them to do this. But they have to do it. They need to do things that are unpopular, potentially."

Concerned locals and environmental groups have piggybacked on the purveyors' reservations to argue against the community plan as it's drafted. In a letter to the county, the local Santa Lucia chapter of the Sierra Club expressed its stance against any new development in Los Osos "until such time as it can be shown that the basin is capable of serving new development while continuing to serve existing homes and businesses while sustaining the habitat and wildlife that rely it."

McGibney, of the Los Osos Sustainability Group, added that the anxiety over water is real for many Los Osos residents who are "scared to death of losing" it.

"Bruce Gibson is always saying we're a bunch of NIMBYs out here," he said. "We're not NIMBYs; we're concerned about our water."

If the Board of Supervisors approves the plan on Dec. 15, the California Coastal Commission still has to certify it. The U.S. Department of Fish and Wildlife also has to sign off on the accompanying habitat conservation plan, which is meant to mitigate its impacts on threatened and endangered species.

Locals like McGibney hope it doesn't get that far. Officials like Gibson know that regardless of what his board does, the plan has a long road ahead.

"I'm fine with the questions that are raised," Gibson said. "We will have extensive discussions. We'll see where we go." Δ