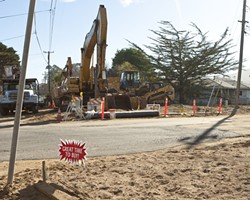 The county was set to approve an additional $4.2 million to complete another phase of the contentious Los Osos wastewater project without so much as a presentation for the public’s benefit. But the vote was effectively blocked.

On Dec. 17, the San Luis Obispo County Board of Supervisors planned to approve two contract amendments: one authorizing an additional $2.8 million to H.D.R. Engineering for construction management services, and another $1.4 million to Carollo Engineers for construction services related to the water recycling facility.

The delay began when, in public comment, the usual critics of the project chastised the board for attempting to “shove through” the contract amendments on the consent agenda—reserved for items not expected to be controversial and typically not discussed in detail. Supervisor Debbie Arnold responded by requesting that the item be pulled, and Supervisor Frank Mecham agreed.

That didn’t sit well with supervisors Bruce Gibson and Adam Hill, who both noted that staff made presentations to the board about the contracts twice: on June 18 and Oct. 8.

“My problem is, Mr. Mecham, you don’t want to study the report, you want to pander to people who yell out,” Hill told Mecham, prompting audible harrumphs from the audience. “For over 30 years people have found ways to sabotage [the project].”

“I want to make something perfectly clear to my colleague: I’m not pandering to anybody,” Mecham shot back. “The difference is that the people out there are not voting on [the contracts]; we are.”

Supervisor Caren Ray—new to the board—broke the tie by commenting that while she was satisfied with the items after talking with county planning staff, she had no problem continuing the item.

And with Hill and Gibson in the minority, the contracts were left unapproved—for the time being.

According to the Los Osos Wastewater Project Manager Jon Waddell, the item could come back before the board in late January, when the board is set to discuss the treatment plant.