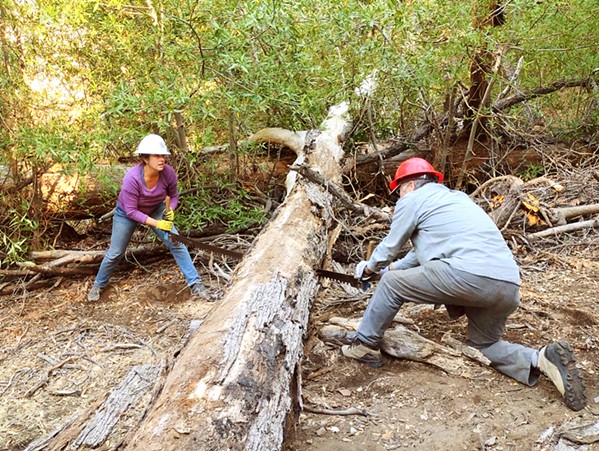 In the tranquility of the Los Padres National Forest at sunrise, the camp cook wakes up, rolls out of a tent, and starts prepping coffee, breakfast, and bagged lunches.

After fuel and caffeine, a small army of about 20 volunteers is ready to start their day in the vast and wild Los Padres backcountry—a forest that encompasses 1.75 million acres of the Central Coast.

Their mission for the next seven to 10 days is to help restore whatever trail or trails they've targeted for that expedition, whether it's in the Sespe Wilderness of Ventura County or Figueroa Mountain in Santa Barbara County.

"We get tons and tons of work done," said Bryan Conant, executive director of the Los Padres Forest Association (LPFA), a 33-year-old nonprofit that oversees various volunteer projects in the forest. "It's usually just trail work, mostly cutting back brush, clearing trees, and redefining the tread on trails."

These "work vacations," as they're called, take place two to four times per year, generate up to 1,000 cumulative hours of volunteer labor, and are the most popular offering for volunteers with the LPFA.

What's the payoff? A vastly improved Los Padres trail system, a chance to connect with the forest and its stewards, and a huge sense of satisfaction.

"At the end of the day, you get to see what you accomplished as a group, as an individual, as a team. And it's there," Conant said. "It's like wow, earlier today we had to crawl through this, and now we can just walk through it like a normal trail."

Conant has led his fair share of work vacations—having started with the LPFA in 2005 as a volunteer, before convincing the nonprofit's board in 2013 to hire its first-ever executive director ("I'm living the dream," he said).

A man infected with "Los Padres-itis," as he calls it, Conant just can't get enough of the forest. The second largest in the state, spanning five counties, Los Padres is so vast and diverse that there's always something new to discover and fall in love with, he said.

"There are a lot of different flavors," said Conant, a Santa Barbara County resident. "The Sespe [Wilderness] has its own flavor. It's got more dramatic mountains but it's drier. And San Luis has nice rolling grassy hills with oaks and—I love the San Luis backcountry. I've just started learning about it in the last five years and I've kind fallen in love with it."

It's that passion for the forest—and the outdoors in general—that draws volunteers from up and down the Central Coast to contribute to LPFA-led projects. Those volunteers run the spectrum of age, but the most dedicated workers tend to be in their 50s, 60s, and 70s, since they often have more time available, Conant said.

"I think most people in their 30s are having families and are busy with that sort of thing. And then you see them start popping back again in their 40s," he said.

According to an LPFA 2021 year-end blog post, volunteers donated 23,000 hours of combined time to the forest last year—quite a feat given the impacts of the COVID-19 pandemic. And their contributions weren't just on trails. LPFA workers removed graffiti, repaired campgrounds, helped create and distribute educational material to those visiting the Los Padres, and more.

"It's not just going on a trail and swinging a tool, though that's what most volunteers do," Conant said. "We also have volunteers who go out and interact with the public, work with the visitors centers, do cleanups or graffiti removals, install signs, or work with scout groups."

Conant said that over the years, the LPFA has become more of a partner agency to the U.S. Forest Service, the federal agency that's in charge of the Los Padres National Forest. The two groups work hand in hand these days.

"We're in constant contact with them," he said. "We've actually developed a really close relationship with them and have garnered their trust, especially in the last couple years. They are trusting us with a lot more than what we've been able to do in the past."

LPFA's growing list of responsibilities in the forest range from doing campground renovations, to taking on more advanced projects, like a recent fencing project in SLO County to block motorcyclists from accessing wilderness areas around High Mountain Road, near Lopez Lake.

Given LPFA's increasing role, Conant said the nonprofit is always looking for new volunteers with niche skills and expertise to help bolster the organization.

"Constantly getting new people with new skills [allows us] to provide more for the Forest Service," he explained.

One of Conant's goals for 2022 and beyond is to pursue more forest projects in the SLO County region of the Los Padres—whether in the Santa Lucia mountain range or on the Big Sur coast.

Conant noted that there are fewer Los Padres-centered volunteer groups in SLO County.

"San Luis has CCCMB [Central Coast Concerned Mountain Bikers], which is a very good organization for mountain bikes, but there's not a whole lot of people caring for the wilderness areas," Conant said. "Fortunately for San Luis, there hasn't been a whole lot of fires in the backcountry, and fires are what really cause trail damage. It sparks this mad regrowth in the trail and all of a sudden those trails get completely overgrown again. In San Luis, the trails are in generally pretty good shape compared to a lot of the other parts of the forest, but we're really looking forward to developing more frequent volunteer work there."

Whatever projects LPFA takes on in the future—from 10-day work vacations in the backcountry, to short, weekend day trips—its success will depend on maintaining its base of dedicated, passionate volunteers.