It seems like you can’t walk two steps in SLO County without stumbling into an awesome taproom or craft brewery. The SLO Craft Beer Festival is a great showcase for all those special suds, and this year’s fest took place at the Alex Madonna Expo Center from Feb. 24 through 25. The fest not only rolled out a plethora of tasty craft beers for attendees to try, but also provided food pairings and educational seminars. It was hosted by Pouring for Good, an organization with the goal to “preserve the history and culture of craft beverages through public awareness and education.” Cheers!

Local photographer and activist Brittany App is all about using her art to tell a story and spread awareness. “I want people to feel like we’re all able to make a positive difference in the world,” App said. While her images run the gamut from landscape photography to weddings, App’s current pet project is a documentary about the recent California drought, Where There Once Was Water. According to App, it “explores our current relationship with water through the complex web of water relationships in California, and explores ideas for moving collectively toward an equitable water future for all.” The film is slated for release in 2018.

For the past 20 years or so, artist Lena Rushing has made her mark in SLO with contemporary, women-centric, and narrative paintings. Her art even adorns the covers of a few local authors’ books. “I think it’s different,” Rushing said. “I’m unworthy, but I’m super grateful.” Up next for Rushing is a collaborative group show with artists from around the country celebrating women’s rights. Look for it at Studios on the Park in Paso in October.

Studios on the Park

Years ago, Paso Robles didn’t even have a movie theater, but today it boasts that plus one of the bigger art galleries around. Studios on the Park is a stalwart of the growing city’s downtown area. “I think we care about everyone who walks through our doors and we do our best to be their art studio,” said Sasha Irving, director for the gallery. In addition to art from near and far, the studio hosts artist’s talks, free art education for kids, and even cookie decorating classes.

Ink Dynasty owner Keith Duggan believes in the right to bare arms! A tattoo artist since 2000, he said, “I’ve drawn my whole life, got tattoos as a teenager, then realized I could make a profession of it,” Duggan said. “I like realism and Japanese style artwork with dragons, horses, and other figures from Japanese mythology.” He tattoos by appointment only, with quite a wait list. He creates tattoos small and large, and like a Giotto fresco, he inks them in sections. He does cover-ups or recommends laser removal if a cover-up won’t get the job done. Either way, he wants the end product to be “top notch.”

Like Liam Neeson, owner Bruce Sanborn and General Manager Austin Snyder have a very particular set of skills to enhance your movie experience with seven screens having incredible Dolby 5.1 sound and BTSX on one. When a plane takes off, you’d swear you were on it. The only thing missing is Neeson sitting next to you in the super comfy power recliner seats. Want more? How about root bear floats made with Doc Burnstein’s ice cream, or local wines and beers to sip? “We aim to provide the best possible movie experience,” Snyder said. Cue the applause!

With a show on stage most weekends of the year, the SLO Little Theatre is the go-to for live theatrical entertainment. “We’re quickly becoming known as the official theater of SLO,” said Kevin Harris, the managing artistic director. “We have a lot more art out there and we’re in people’s faces. We do good work.” In town since 1947, the Little Theatre prides itself on being one of the longest running community theaters in the nation. The play Our Town will show at the Little Theatre through May 28. 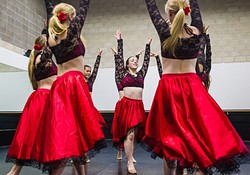 CORE means creative, original, raw, energy. Co-owned by Leslie Baumberger, Stacy Millard, and Zheila Pouraghabagher, CORE offers dance classes for ages 2 to 80! “We have discovered a huge group of people over age 40 who want to learn to dance and we target that group, as well as offer classes in traditional ballet, hip-hop, and modern for those who want to  study dance,” Baumberger said. CORE students perform at local elementary schools, charity fundraisers, and the SLO Farmers’ Market. “We’re always willing to give back to the community who has supported us. If they need our help, we’re there,” Baumberger said.

Matt Cross is one of those awesome musicians who’s refreshingly down-to-earth, just a bro who loves to provide the musical lubricant to any party. “It means a lot to me to be voted Best Entertainer of 2017,” Matt said. “I feel that people truly understand what I do. I am not a singer-songwriter, I am not trying to be on The Voice, I don’t think I am going to be a teen idol. I like to entertain people and have been doing it most of my life. I am the guy at the bar, at the party, at the wedding, that plays your favorite songs and is there to make sure you have a good time.”

There’s nothing quite like fine wine, good music, and scenic vineyards, and Vina Robles has all three. Plus, there isn’t really a bad seat in the entire amphitheater. Paul Leatherman, general manager for the venue, said, “the rolling hills of oaks combined with the outdoor setting” make it an ideal spot to take in a concert. Bryan Adams, Slayer, Idina Menzel, and more will grace its stage this summer.

Each Thursday evening locals sell everything from soup to nuts on Higuera Street. Farmers’ Market Manager Ariana Burton said there’s usually more than 100 local vendors and there’s always entertainment by local performers. The market is a wonderful venue for community organizations like Cal Poly’s open house, local high school students sharing their experiments, and STEAM Alley (Science, Technology, Engineering, Arts, and Math), an interactive learning experience of experiments, technology, and art for kids of all ages. Cal Poly brings an entire biology class every third Thursday. Then there’s the food! “We usually have eight barbecue areas,” Burton said. “I’ve met so many people and made so many friends. It’s really great!”

Runner-up: Concerts in the Plaza

The CowParade has ended with each bovine masterpiece being purchased at auction or by sponsors. Funds raised will benefit 40 local nonprofits! Organizers Tom Halen and Alan Vanderhorst brought this international art exhibit to SLO with 101 sponsored cows. “It has been amazing to have this event in SLO County with our heritage in dairy and cattle raising,” said Halen, who sponsored 13 cows and donated six mini-moos to local high schools. He purchased four cows for the town of Harmony, which he and Vanderhorst own. Local artists were chosen to make each cow special. My favorites are Starry Night Cow and Marilyn Mooonroe! Check out the cattle-logue at cowparadeslo.com.

Correction: This article has been edited to correct the title of Brittany App’s documentary, “Where There Once Was Water.”