Love and politics, bricks and badminton

With Smash, Cal Poly Theatre Professor Josh Machamer immediately makes it clear this will be no ordinary evening at the theater. Don’t get too comfortable, his latest production snarls. 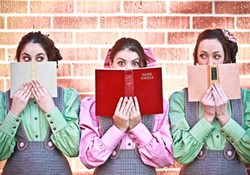 An adaptation of George Bernard Shaw’s novel An Unsocial Socialist, the show starts out conventionally enough: The actors are on the stage, playgoers seated in the audience, and everyone is certain of his or her place. (“Excuse me,” they will hiss at anyone who challenges this preordained order, “but I believe I am in row 20, seat J.” And any offenders, recognizing the errors of their ways, will hastily relocate themselves.) And the play begins.

The setting is late-18th century England, on the faux front steps of the Jansenius residence, where the marriage of millionaire Sidney Trefusis (Jack Adams) and also-rich Henrietta Jansenius (Anna Clauson) has just taken place. The pair is about to join the guests at the wedding reception when Sidney makes an ill-timed announcement: He’s leaving his bride to overthrow the British government and start a socialist revolution. And he just can’t do that with his beloved hanging around, weakening him with her womanly charms. He exits her life. How unfortunate.

Then it gets iffy: The audience is asked to get up, as in out of their chairs. We are asked to come on stage with the actors, completely muddying the separation between us and them. We hesitate at first—we don’t want to be exposed! No! But we obey, and soon we are led to a whole new set we’ve never seen before: a wide, impossibly green lawn, around which we are seated.

In a movie, this would be its second beginning—the first scene that comes after the title flashes up on the screen. But this is not a movie, and we are just as much under the spotlight as the actors. If we are texting, they will see. If we bend down to scratch our foot, they will see that, too.

But were this a movie, the second-first scene would fade in as Agatha Wylie, played so brilliantly by Ellie Kovara, carefully crosses the green of the all-women’s Alton College. And she almost makes it across undetected, too, were it not for one Jane Carpenter, played by Natalie Roy. The aptly named Miss Agatha Wylie is often in trouble, though her offenses change daily—as if she selected them every morning from one of those rotating closets that stylish rich girls have. This time, Agatha has written something very daring and bad in the school’s “My Faults” book. And she can’t seem to get away from Jane, her fellow student, without disclosing what those incendiary words were.

Then appears the bespectacled, be-wheeled, deeply intimidating headmistress Miss Wilson (Shelby Lewis, who totally owns the role). If Agatha does not recant, she threatens, the school’s beloved but largely ineffectual groundskeeper, Lumpkin (Kyle McCurdy, who deserves utmost praise for maintaining an authentic, booze-drizzled Scottish brogue throughout), will be replaced. Miss Wilson already has someone else in mind: the heavy lifting, working-class Mr. Mengels, who bears an uncanny resemblance to Henrietta’s runaway bridegroom.

Smash has been on director Machamer’s radar, he said, for about a decade. But now, it seems, the time is right: The available actors are a perfect match, and the play’s simple setting is in keeping for a quarter with less building time. Elaborate period costumes imbue the show with a sense of place and time, filling in the open spaces left by a minimalist set.

The reasons for the play’s layout, though, were conceptual as well as economical.

“There’s no place to hide,” Machamer explained. “That first scene, you only see one or two dimensions of somebody, but then once it gets onstage, you get to see everyone in terms of their faults as well as their good points.”

Agatha is able to wiggle her way out of Miss Wilson’s ultimatum, and both Mengels and Lumpkin remain employed. She reveals to Mengels that the words that got her in such trouble endorsed the ideals of Marx and Engels, whom she has never read, but who she knew would infuriate Miss Wilson.

Of course, one gleeful pot-stirrer can best recognize another, and Agatha sees through Sidney’s “Mengels” act in about five minutes. So he, in turn, reveals to her his radical plan: to plant the seed of socialism in the fertile minds of Britain’s young women, those future consorts of the country’s leaders, and thereby infiltrate every level of government. And it starts at Alton College!

Agatha begins to fall in love with Sidney/Mengels, his politics, and his crazy plan. However, England being, after all, a wee island, Agatha turns out to be the cousin of Sidney’s deserted wife. The political comedy takes a farcical turn when Henrietta and her father, played by Max Sopkin, pay a visit to the school.

The well-crafted piece, adapted for the stage by Jeremy Thatcher, allows considerable time for a supporting cast to blossom as a revolution burbles under the surface. Miss Wilson’s right-hand man, the wispy poet Chichester Erskine (Mathew Herman), regularly accosts the horrified Gertrude Lindsey (Nora Doane) with unwanted flowers and sonnets. And in Eric Cotti Cutruzzula’s portrayal of the snooty, privileged Sir Charles Brandon, one detects a whiff of fun being had at the expense of the monarchy.

The Wizard of Oz pulled moviegoers out of black and white and into Technicolor, and Smash, too, seems to break through the initial scene’s black-and-white, orderly world into one that’s more colorful, more dangerous, and more alive.