Love in the time of Hallmark

If you absolutely must say 'I love you' this Valentine's Day, why not say it with original art?

Perhaps your love is “like an ancient cameo/ Turned brown with the ages,” as Langston Hughes described in “When She Wears Red.” Or perhaps, instead, your “luve’s like a red, red rose,” as was the case for Robert Burns. Maybe, like Carol Ann Duffy, you would give your valentine “an onion…moon wrapped in paper.” But whomever or whatever your affection has fixed upon, consider an alternative to plying them with the customary Hallmark cards, bouquet of roses, or diamond-encrusted jewelry: ARTS Obispo has assembled several hundred valentines created by local artists, which will be on sale at ARTS Space Obispo Jan. 20 through Saint Valentine’s Day.

In their third such endeavor—aptly titled Hearts Obispo 3—the creative powers that be have tapped a somewhat unlikely assembly of artists, including an abstract aerial landscape painter, a wild beast, a painter of houses, and a photographer whose appreciation for “primordial soup”—the cracking crabs and salty wildlife of the ocean—drives his oceanscape photography.

Some, like Lorna Teixeira (the painter of houses, not to be confused with someone who paints houses) and Sam Peck (the primordial soup element of the equation) are new to the tradition of creating valentines for the ARTS Space Obispo fundraiser. Neither makes a habit of creating valentines; Teixeira doesn’t consider herself much of a Hallmark gal and Peck characterizes valentines as a little frilly for his taste. But both bring a unique expression of love to the table—for the Central Coast and nature in general in Peck’s case, and for community and neighbors in Teixeira’s.

“Every day should be Valentine’s Day, but it’s not,” commented Teixeira. “A day to remember the people you care about, it’s sweet.” 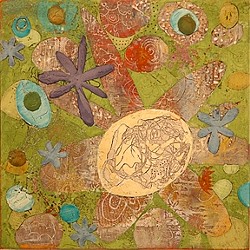 But aside from the non-traditional nature of the valentines they will be selling, as artists Teixeira and Peck have little in common. For Peck to create his work, he must first leave his house, drive along the coastline and clamber amongst rocks and wildlife. His destination is generally Cayucos, Morro Bay, or the Pacific Valley. But even the landscapes that look effortlessly beautiful require work to capture.

“I watch the sky to a large extent now,” he explained. “I wake up before sunrise and I go out and check. If I see a really interesting cloud layover I’ll get up and throw the camera in the truck and take off. If it looks plain and ordinary I go back to bed.”

Teixeira plucks her subjects from the contents of her imagination. Her most recent motif includes rows upon rows of houses, a theme her subconscious appropriated from reality; she was in the process of building her house when the structures emerged within her painting. Before that her shapes were earthier and more organic, incorporating everything from her beloved family pet to birds, nests, frogs, and cities chartered grandly and exclusively in her mind. More recently her focus has returned to these forms, though how long this interest will last is difficult for Teixeira to predict.

“I just go from place to place,” she explained. “I’m not one of the artists that sticks with the same theme. It kind of all melds and flows with my life. Now I just got a puppy so I’ll probably start doing dogs.”

While she’s not creating any new work for the Valentine’s Day exhibit, Teixeira contributed a 3-foot-by-3-foot house painting. She was one of a handful of artists invited to contribute a large work to the exhibit; the majority of the artists were limited to pieces no larger than the size of a breadbox, a restriction created in part to keep prices low. And while she eschews many of the more commercial aspects of the holiday, Teixeira admits that she generally produces hand-made valentines for her children, in much the same fashion that her own mother crafted them for her.

Then there are the artists—including Ken Christensen, who founded The New Fauves (fauve translates to ‘wild beast’ in French) and Glynis Chaffin-Tinglof—who are making a return visit to the heart-themed walls of ARTS Space Obispo. Both are actively involved in the organization, Christensen as a board member and Chaffin-Tinglof as a co-chair for the Open Studios Tour.

Christensen’s style is bold and colorful in conjunction with the aesthetic of fauvism, which he considers a kind of heightened reality. When painting his land and cityscapes the painter’s intention is to accurately represent the scene before him, but enhance the subject to make it more attention grabbing. He favors bold colors, oranges and reds in particular. But the wild beast can also tame his style to suit a particular theme. And around Valentine’s Day that motif often involves hearts.

“I had the habit for a long time of hand-making cards and I’ve often painted valentines for my wife and kids,” he admitted. “Everyone gets a kick out of getting something original. It just seems too ridiculous for an artist to go into a store and buy a Hallmark card when I can do cards.”

Fortunately for Christensen, he was also invited to submit a larger piece to the exhibit; he describes his style as bold and thick, and not particularly suited to small canvases. And art lovers who consider purchasing his works at the exhibit may be purchasing more than they originally realized. Often, bits of sand and bugs are ingrained in his canvases, remnants from the places where they were painted that give the piece unique life and character. After all, why purchase a print when ARTS Space Obispo carries original art, literally infused with the natural beauty of the Central Coast?

Chaffin-Tinglof began painting aerial landscapes in the late ’90s, first exhibiting them in Palo Alto. Back then her pieces were easier to identify as she has steadily been abstracting her bird’s eye view paintings ever since. In her newest works, she employs vast quantities of white space, uncharted territory punctuated by colorful splotches indicating human habitation and development.

But for the Hearts Obispo 3 exhibit, Chaffin-Tinglof is veering away from her characteristic landscapes, while retaining the style that is uniquely her own. She began with the word ‘love,’ and then began to paint, abstractly, around, over, and across the word until she had lost, and found it, within the brushstrokes.

“”It’s a theme I’ve been working on, sub-text,” she explained. “Even through chaos and kids, the love, that’s always there. Even though it may be hard to find sometimes.”

Working from her Los Osos studio while her daughter is at school, Chaffin-Tinglof paints several pieces at once, citing a completion phobia that prevents her from focusing on a single work. But an approaching deadline for an exhibit exerts all the pressure she needs to finish her work.

And though she isn’t exactly queuing up for a space aboard the Valentine’s Day express, Chaffin-Tinglof believes the holiday can be an opportunity to express something meaningful.

“It’s really about passion for something—a person or your job,” she concluded. “I’m pretty passionate about what ARTS Obispo is doing for the community.” ∆

Arts Editor Ashley Schwellenbach thinks love is like Book Antiqua font. Ask for her take on hate at aschwellenbach@newtimesslo.com.