So hold your breath if you don't want any!

Roses are red, violets are blue, some poems rhyme, but this one doesn’t.

Is it just me, or have you noticed that for many people, Valentine’s Day is the holiday people love to hate? Nia Vardalos (My Big Fat Greek Wedding) even made a movie about it in 2009, called—what else?—I Hate Valentine’s Day.

Plug in “hate Valentine’s Day” into Google and up spring more than 89 million results. Maybe it’s the commercialism. Maybe men find the holiday one-sided (You get to buy candy and flowers and dinner! Whee!). Maybe it never lives up to your expectation.

Or maybe you don’t have a significant other.

The thing about Valentine’s Day is this: If you’re in the latter category, the day can provide some high-value targets for your next romance! Seriously! When I found myself single during Cupid’s little love fest, I’d go out, hit a show, grab a drink, and look around. You never know, see? If you stay at home, you’re 100 percent sure not to meet anyone new (unless you order a pizza, but do you really want to start dating a pizza delivery person? No offense, pizza delivery person, but even you don’t think you’ve reached your career pinnacle, right?).

So Thursday, Feb. 14, is Valentine’s Day, and here’s what’s happening:

Shawn Mullins is playing at SLO Brew (7:30 p.m.; 21-and-older; $18 presale or $20 at the door). Maybe you know his top 10 hit “Lullaby,” that sultry talk-singing tune that soars to a hooky chorus: “Everything’s gonna be all right, rockabye.” The Atlanta-based folk singer was a member of the U.S. Army Airborne Division when he released his self-titled cassette in 1989. Two years later, he released Everchanging World, wrapped up his eight-year stint in the military, and leapt into music full time. It took him seven years of independent releases before he landed a major label record deal and released Soul’s Core on Columbia Records. The album featured “Lullaby,” which was nominated for a Grammy Award, and it eventually went platinum and led to an anthology of his earlier work, 1999’s The First Ten Years. Hard work does pay off! 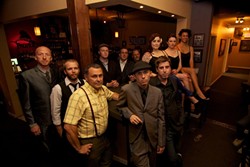 If you’re more in the mood for some horn-driven soul, The Inciters return to Frog and Peach Feb. 14 (10 p.m. to 1 a.m.; 21-and-older) as well as Saturday, Feb. 16 (10 p.m. to 1 a.m.; 21-and-older). This smoking hot 10-piece Northern England-style soul group hails from Santa Cruz, but they base their sound off the 1960s British soul music that was inspired by American Stax Records and Motown sounds. In addition to their sweet horn section, they’ve got three lush female singers and rock steady rhythms. “We just released a four-track EP on Heavy Soul Records in the UK and the year has started off with a bang,” said lead guitarist Don Roland, “including opening for The English Beat in Santa Cruz, The Untouchables in San Jose and San Francisco, and headlining in Sacramento, and much more.”

The SLO Down Pub will present an evening with Jimmy Townsend (6:30 p.m.; all ages; pass the hat), the longtime host of the venue’s Tuesday night blues jams. He’ll be presenting plenty of love songs to get people in the mood—songs dedicated to Sally, his wife of 37 years. Guests will include Gary Foshee, the female quartet The Belles, and Brad Kyle of the Dr. Danger Band.

If you find yourself in Pismo Beach, head to the intimate and charming Vino Versato, a terrific wine bar that will feature the music of Tim Jackson with a guest appearance by Dave Miller. Both these guys are great players with a fun repertoire of songs, and if you’re lucky, bar owner Cindy Giovacchini will sing on a few songs. She’s amazing!

Have fun, happy loving couples, and don’t be shy, singles! It’s also the SLO Farmers Market, so get out and mingle and find that next romance. Trust me: He or she isn’t sitting next to you on the couch while you’re at home in your sweats watching television!

OK, that takes care of Valentine’s Day, but what else is going on for the week? Well, as usual, SLO Brew has a full slate of shows continuing Friday, Feb. 15, with Israel Vibration (7:30 p.m.; 21-and-older; $24 presale or $27 at the door). This seminal Jamaican reggae act emerged in the late-’70s as a vocal harmony trio that used dissonance to convey a socially conscious message. They all met as children at the Mona Rehabilitation Clinic, all sufferers of polio, which spread throughout Jamaica in the 1950s. The group now consists of Lascelle “Wiss” Bulgin and Cecil “Skeleton” Spence, and their most recent album was 2010’s Reggae Knights.

Ears will bleed and faces will melt when Exhumed brings its original grindcore death metal sounds to the club on Sunday, Feb. 17 (8 p.m.; all ages; $12). Formed in 1991 by Matt Harvey, who now lives in Arroyo Grande, the band also includes SLO Town resident Michael Hamilton. They’ve been touring the world for the last year and a half or so, so welcome home, boys!

Salvador Santana, a 28-year-old keyboardist, vocalist, composer, and songwriter plays SLO Brew on Monday, Feb. 18 (7:30 p.m.; all ages; $10). His new single “Into the Light” has been getting a lot of traction with fans and critics alike. His band features Alex Nester (vocals & keyboards), Jared Meeker (guitar), Blake Collie (drums), and Itai Shapira (bass), and they’ll perform a variety of songs from Santana’s previously released solo album Keyboard City, as well as his new songs. Check out the “Into the Light” video on slobrewingco.com. Solid! Oh, and yes, he’s Carlos’ kid.

The Orwells take the stage on Tuesday, Feb. 19 (8 p.m.; all ages; $8), with opening act Gap Dream. The Orwells are a quintet of 17-year-olds from Elmhurst, Ill., who write “primitive teenage battle cries about girls and America and being suspended from high school.” They had to leave their parents sometime, and the time is now!

Finally, on Wednesday, Feb. 20, hip-hop hero Del the Funky Homosapien returns to the club (8 p.m.; all ages; $20 presale or $25 at the door), with Bukue One and Vokab Kompany. Should be a funky evening of alt-hip-hop.

I think Wally Barnick has reached a really good place in his life. He’s always posting Facebook praise for his kids, and he still plays with the Cache Valley Drifters, but now I see him playing whenever he can when he’s not spending time deeply relaxing in Big Sur. Yeah, the dude’s in a good place, and he’s got another fun band together called the HayDudes, who return to Painted Sky with a concert on Saturday, Feb. 16 (8 p.m.; all ages; $20). The band also includes Kenny Blackwell on mandolin, guitar, and vocals; and Mike Mullins on guitar, mandolin, and vocals. Wally’s on Fender bass and vocals. These three guys just have talent to burn and are sure to put on an amazing show. Buy tickets at the Cambria Music Box Shoppe, Boo Boo Records, or by calling 927-8330. They’ll also play a WindSong House Concert in Paso on Friday, Feb. 15 (call 776-2082 to see if there are tickets available).

Unfinished Business will provide its brand of upbeat ’60s rock’n’roll this Saturday, Feb. 16, when the SLO City Firefighters present the Firefighters Ball at the Embassy Suites Hotel from 5 to 11:30 p.m. The event will include hors d’oeuvres, a silent auction, dinner, dessert, a live auction, and dancing. Tickets are $125 per person and may be purchased online at callahanheartsafeproject.org, slocityfirefighters.org, and brownpapertickets.com, or by calling 441-8500. This event benefits the John W. Callahan Heart Safe Project, which was established to provide awareness, education, and immediate access to Automated External Defibrillators throughout our community.

The Russian National Orchestra will come to the Performing Arts Center’s Cohan Center on Saturday, Feb. 16, at 8 p.m. Led by conductor Andrey Rubtsov, with special guest pianist Daniil Trifonov, the program will include Bedrich Smetena’s “Overture to ‘The Bartered Bride,’” Prokofiev’s “Piano Concerto No. 3 in C Major, Op. 26,” and Tchaikovsky’s “Symphony No. 4 in F minor, Op. 36.” Student and adult tickets range from $30 to $64. Call 756-4849 or order online at calpolyarts.org.

Happy Birthday, Linda Martin! To celebrate, Back Bay Betty is playing the Merrimaker on Saturday, Feb. 16, from 9 p.m. to 1 a.m. Linda, the band’s lead singer, will be delivering some awesome tunes perfect for dancing! “I’d like to extend an open invitation to everyone who wants to boogie down and get funky with me and the boys at the Merrimaker,” said Linda.

On Sunday, Feb. 17, saxophonist Woody Witt and pianist Larry Ham combine forces for the next installment of the Famous Jazz Artist Series at the D’Anbino wine tasting room. “Witt is regarded as the top jazz saxophonist of the southwest, while Ham is one of New York City’s most prominent jazz piano artists,” according to event organizer Charlie Shoemake (piano and vibes), who, with his vocalist wife Sandy, will join in the fun with backing band Ken Hustad (bass) and Darrell Voss (drums). There are 4 and 7:15 p.m. shows for $15 each, or see both for $20. Call 927-0567 for reservations.

New West Guitar Group plays Steynberg on Sunday, Feb. 17, at 7 p.m. The members met as USC students: “We were this group of high school all-stars with the electric guitar, and we had come to USC to take it to the next level,” said Perry Smith. “The school had an entire department dedicated to guitar. It had a great faculty and it attracted some wonderful guitar players, so it was a special time for all of us.” Their debut album, Introducing New West Guitar Group, was released in 2005, and the rest, as they say, was history.

“My fellow Hospice Partners musician Cindy Myers and myself have been playing music together recently and have formed a duo we are calling ‘Ragged Company,’ to play acoustic vocal tunes, covers, and some originals,” said guitar wiz Tim Pacheco. Check them out on Saturday, Feb. 16, at Atascadero Pavilion for “The Big Laugh!” with music at 7 p.m., followed by comedy at 8 p.m. by Orny Adams, Bil Dwyer, Mrs. Hughes, Myk Powell, and hosted by Lizette Mizelle. Then on Monday, Feb. 18, at 6:30 p.m., the duo will present a four-song set as part of a music showcase at Upper Crust Trattoria restaurant with headliner Amber Cross.

On Monday, Feb. 18, at 7:30 p.m. in the Performing Arts Center’s Cohan Center, Spanish guitar master Paco Peña and some fiery dancers present “Flamenco Vivo!” According to press materials, “Peña explores the trance-inducing tribal roots of flamenco: from the alboreá to the razor-sharp complexity of the bulería—all while keeping the audience captivated with dramatic compositions, fantastic guitar work, and passion-filled dancers.” A free pre-show lecture will be led by Cal Poly music professor Ken Habib, at 6:30 p.m. in the PAC’s Philips Recital Hall. Student and adult tickets for the performance range from $30 to $54. Call 756-4849 or order online at calpolyarts.org.

“Once again, it’s time to get naughty at Mother’s Tavern as we present our annual ‘Naughty Gras’ party on Tuesday, Feb. 19, featuring the live electronic sounds of Tropo and Kevlar, plus a special guest DJ,” said Shari Pearl, Mother’s promotions director. “Doors open at 9:30 p.m. Tickets are available in advance for $8, and $10 at the door. Costumes are encouraged, and we look forward to a great event.”