How a highway billboard became a target for sappy graffiti

Graffiti can be awkward.

For some it might be unfiltered art, or a rebellious expression spray-painted onto public walls, overpasses, and billboards. It might be a warning, like a dog marking its yard so everyone else knows to back off, even if the haughty little Chihuahua down the street won’t stop pissing on the lawn. 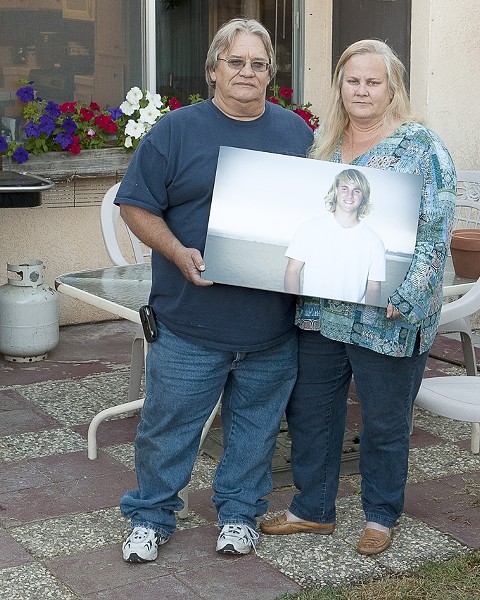 Yet for many others, it’s a nuisance. There can be thousands of public dollars devoted to scrubbing off tags or simply painting over an unending stream of bubble letters and gang signs. It can be criminal in nature and a sign of a horribly violent and territorial world most people would rather see vanish.

And often, there’s the poor schlub who just happened to own a piece of property with a nice, big blank space in full public view.

But for Cheryl Blair, whose son AJ died in March, three words scrawled
in black paint on a blank billboard seemed to have had a profound and lasting effect.

Blair still has trouble talking about her son without choking back tears. AJ, a laid-back kid from Arroyo Grande who used to sit in front of a Pismo Beach sandwich shop strumming his ukulele, hadn’t had an asthma attack in years. But at about 11 p.m. on a Tuesday night in March, the 21-year-old stepped out of the shower and told his mom he needed to go to the hospital.

He died in the car on the way there while Cheryl was driving.

“Our son had touched so many people, and they loved him so much,” Blair said, her eyes red as she tried to keep tears from breaking the corners and rolling down her cheek. But she couldn’t.

Then one of AJ’s best friends, David King, also 21, lost his battle with rhabdomyosarcoma, a rare form of muscular cancer, a month later.

Cheryl was at King’s memorial service with her husband, Dan, when she got a call. On the other end of the line, a friend was asking if they’d seen the billboard on Highway 101 in San Luis Obispo and, if not, to get down there. After the service the couple got in their car and drove by.

On one side of a blank billboard that sits about halfway between the Marsh and Los Osos Valley Road exits, someone had written “Love you AJ,” and on the other side they’d written
“Love you DK,” for David King.

Cheryl is quick to say she doesn’t condone illegal behavior but “it was pretty amazing … it touched us so much.”

She takes the route every day for work, and every day the messages were up, they hit the same chord.

“I cried every day, but it was good,” she said. “… It just helped me because you don’t want your son to be forgotten.”

The tagger was friends with both DK and AJ. After King’s death, he said the idea came to him to tag that billboard, something they’d joked about when King and Blair were still alive.

“I just thought, it’s something I can do that everyone will see, and just something nice for my friends’ parents,” said the tagger—let’s call him Bob.

Bob climbed onto the billboard at about 11 p.m., at first dodging just about every pair of oncoming headlights. After a while, he got cockier, and decided he’d have a good head start if anyone decided to try to chase him.

“I just climbed and held myself there because it took forever,” Bob said.

The messages stayed up until the billboard owner got out with a can of white paint and erased the tags. It was hard for Cheryl when the message to her son and his friend disappeared beneath a coat of white paint.

Except it didn’t stay gone. New taggers have started marking the same billboard, and for whatever reason, they kept the tone. One person wrote “Happy Mother’s Day, love Master Chief.” And as of press time, southbound commuters could see at least three messages, including the most prominently displayed message stating simply, “I love my Peanut.”

Lt. Bill Proll with the SLO Police Department thinks that’s nice and cute and all, but it’s still a crime. According to Proll, the department has received two complaints over the billboard graffiti, although the property is technically in the county’s jurisdiction.

“Obviously it’s not the worst of gang graffiti,” Proll said. “It’s not the ‘F’ word, but it’s still defacing property that’s not theirs. … If people want to tell Peanut that they love her on her bedroom wall, it’s perfectly fine, but obviously not on someone else’s property.”

Ernie Dalidio, who owns the billboard, is less amused.

“What the little bastards are doing is illegal,” he said. “It’s wrong.”

Dalidio said the billboard has been tagged in the past, but most recently he’s sent an employee of his out about a half-dozen times to paint over the messages. He’s already gone through one 5-gallon pail of white paint and he’s beginning to draw down another. Each time he has to paint over a new message (“If it’s on private property our first recourse is to contact the property owner, it’s their responsibility to clean it up,” Proll said) Dalidio said it costs about $150.

“This cost me a lot of money,” he said. “… Why is some kid or whoever they
are trespassing on private property, and it’s OK?”

For Cheryl, even though the message is gone, and she seems conflicted about the illegality of it all, having those words scrawled clumsily on a billboard seems to have helped her through the loss of her son.

“It’s another way to just get people to remember,” she said. “In case anyone wondered.”