Love, refound: SLO Little Theatre's Tuesdays with Morrie gets at the heart of life

Unless your cold, cold heart is barely beating, odds are you will cry (at least a little) during a viewing of San Luis Obispo’s Little Theatre’s Tuesdays with Morrie.

But crying gets a bad rap. After all, everyone can use a good, cathartic cry from time to time. As Morrie Scwartz (Tom Ammon), the titular character says, “Tears are OK.” 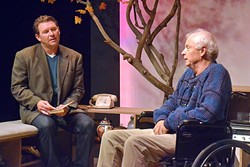 The play is based on Mitch Albom’s (Bobby Kendrick) 1997 best-selling memoir of the same name. While in college, Professor Scwartz becomes a mentor for young Mitch, engaging him in philosophical discussions and encouraging his student to pursue a love for jazz music. Graduation comes and Morrie makes Mitch promise to stay in touch. Nearly 20 years pass until they see or speak to each other again.

I was advised to read the book before seeing the play, and while I wish I had, the play stands alone in its own right. While the entire production is just the two characters of Mitch and Morrie, (set at Mitch’s home with a beautiful maple tree in the background), Ammon and Kendrick keep audience members captivated through the thought-provoking dialogue and emotional intensity that they execute it with.

Now older and jaded, Mitch has long since given up on his dream of music, went back to school, and is now in a lucrative career as an in-demand sports journalist (on behalf of everyone in journalism: ha ha ha). While Mitch has found success in work, he’s unhappy and always busy, cutting short his honeymoon with his new bride to work on assignment. When Mitch sees Morrie on TV doing an interview with Ted Koppel on Nightline talking about dying from ALS (Lou Gehrig’s Disease), he decides to go visit his old professor.

Morrie is thrilled to see Mitch, but he’s sad his former student has abandoned music and doesn’t necessarily care about Mitch’s career success. Instead he asks his pupil if he’s happy, if he’s doing everything he can to be fully human. Mitch starts visiting Morrie every Tuesday, in spite of his busy work schedule, and promises to come until the end. While Morrie’s health and physical capabilities rapidly deteriorate, he still takes the time to answer letters from former students, friends, and people who saw him on Nightline.

“The most important thing in life is to learn how to give out love, and to let it come in,” Morrie tells Mitch. “Let it come in. We think we don’t deserve love; we think if we let it in we’ll become too soft. But a wise man named Levine said it right. He said, ‘Love is the only rational act.’”

Mitch struggles with feeling worthy of love himself, “Why did you let me back in?” he asks Morrie, confused at how openly his mentor welcomed him back after nearly 20 years of Mitch not reaching out at all.

Up until the end, Morrie continues to live life as much as he can, altering the way Mitch looks at his own life and success forever.

“Dying is only one thing to be sad over,” Morrie tells Mitch. “Living unhappily is something else.”

Ryah Cooley is pondering the meaning of life at rcooley@newtimesslo.com.