'Love, Simon' delivers a poignant coming of age story for the Internet age

Greg Berlanti (Life as We Know It) directs this coming of age story about Simon Spier (Nick Robinson), a closeted gay teenager who must face his sexual identity. (109 min.) 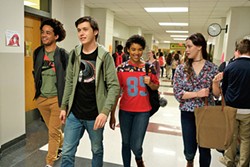 Glen At first, Love, Simon came across as a boilerplate coming of age story with the slight twist of Simon being a closeted gay. It set up his warm relationships with friends Leah (Katherine Langford), Nick (Jorge Lendeborg Jr.), and Abby (Alexandra Shipp); parents Emily (Jennifer Garner) and Jack (Josh Duhamel); and sister Nora (Talitha Bateman). He's just a regular guy with a big secret who likes to gaze out the window at the hunky gardener next door and dream of being accepted for who he is. The only out gay boy at his high school is Ethan (Clark Moore), who unlike Simon is exaggeratedly effete but sharp-witted enough to rebuff his peers who dare mock him. It's 2018, so of course part of the story must play out online with a school gossip and online confession site, on which Simon begins an email correspondence with another gay young man named "Blue." Simon takes on his own pseudonym, "Jacques," and the two get to know each other, though neither knows the other's true identity. Throughout the story, Simon wonders which of his classmates it is: Bram (Keiynan Lonsdale), the soccer player; Cal (Miles Heizer), the brooding loner; or Lyle (Joey Pollari), the hunky wallflower. The story's antagonist is star thespian and royal douche bag Martin (Logan Miller), who by accident is able to screenshot some of Simon and Blue's emails and thus extort Simon into setting Martin up with Simon's gorgeous friend Abby, who naturally Simon's other friend Nick is already in love with. It's a tangled web, but all these complications help to elevate the film beyond standard coming of age. Throw in some comedy via obnoxious Vice Principal Mr. Worth (Tony Hale) and put upon drama teacher Ms. Albright (Natasha Rothwell), and you've got an engaging, often poignant, frequently laugh-out-loud funny teen dramady.

Anna Instead of falling into the ranks of "just another high school dramady," Love, Simon is a heartfelt, relatable, and sincere slice of American teen life today. While it may feel that our world is accepting now more than ever and that a gay kid should be able to come out with little consequence to his peers and family, Love, Simon shows that teenage life is just as tricky and messy to deal with as it has ever been. Simon is a charming kid; he's got a solid home life and a family he adores, a Subaru station wagon, and a small but quality group of friends to fill it. He sees what life is like for out student Ethan. Though Ethan brushes away insults with sassy and clever retorts, Simon doesn't think he could take the ridicule with such ease. His dad is a cool and loving guy, but he also makes joking remarks that are less than open-minded when it comes to sexuality. His little sister looks up to him wholly, and his therapist mother is cautiously aware that her son has a secret but doesn't want to broach the subject. His best friend Leah has been around since elementary school, and Simon is far too close to her to see how completely in love with him she is. Keeping his secret means he has to lie to everyone around him, and when the news finally breaks, his world starts to fall apart because of it. His friends are hurt and angry, and all eyes at the school are now on Simon and his mysterious pen pal Blue.

Glen Simon's betrayal of his closest friends in his effort to protect himself makes the film worth watching. Without that complication, Love Simon would be an afterschool TV special, but instead it's a well-observed look at the travails and pitfalls of modern day high school. Simon truly feels lost and abandoned when he's outed. That was supposed to be his decision, when and how, but that was taken away from him. In one of the film's most touching moments, Simon's little sister Nora comes to him and reveals that she saw him outed on the school gossip site, but he shuts her out, unready and unable to process it all. Like John Hughes films such as Pretty in Pink, Some Kind of Wonderful, 16 Candles, and The Breakfast Club, Love, Simon gets right to the heart of what it means to be an awkward adolescent trying to find your place in the world. The screenplay by Isaac Aptaker and Elizabeth Berger, which is based on the YA novel Simon vs. The Homo Sapiens Agenda, delivers a big-hearted story that celebrates a changing culture that's trying to shake off its homophobic history. It's definitely worth a trip to the theater.

Anna I agree that the tension and anger between Simon and his friend group is key in keeping this film feeling genuine. His friends aren't mad over his sexuality; they're mad because he manipulated them in order to keep it a secret. The kid who outs him, Martin, is the kind of kid you want to smack on the back of the head—he's overly confident and outlandishly obnoxious, but really he's insecure and overcompensating. The fact that he's blackmailing Simon with screen grabs of private emails shows his emotional maturity still has a long way to go. He's not a bad guy; he's just immature and unsure where he fits in with his peer group. All the characters are relatable in one way or another, and even more so it's a pretty accurate portrayal of high school dynamics, much like the John Hughes films you mentioned and one of my favorites: 10 Things I Hate About You. It's funny and heartwarming, and a great film featuring a gay teen protagonist. If this film helps anyone to feel a little bit more at ease with owning their own story, I call that a win. The film is about a lot more than two people finding each other; it is about a young guy learning and constructing who he is at his core. It's definitely worth a trip to the theater. Δ