Creator Misha Green teams with producers J.J. Abrams and Jordan Peele to bring this fantasy horror series to life. Based on a novel by Matt Ruff, it's set in 1950s Jim Crow-era America, and Black Korean War vet Atticus Freeman (Jonathan Majors) teams up with his Black travel-guide-writing Uncle George (Courtney B. Vance) and friend Letitia "Leti" Lewis (Jurnee Smollett) to go in search of his missing father, Montrose (Michael Kenneth Williams). Drawn to Ardham, Massachusetts, a town famed horror writer H. P. Lovecraft supposedly set many of his fictional tales in, they discover they're battling both the racist terrors of white America and horrifying Lovecraftian monsters. (10 53- to 68-min. episodes) 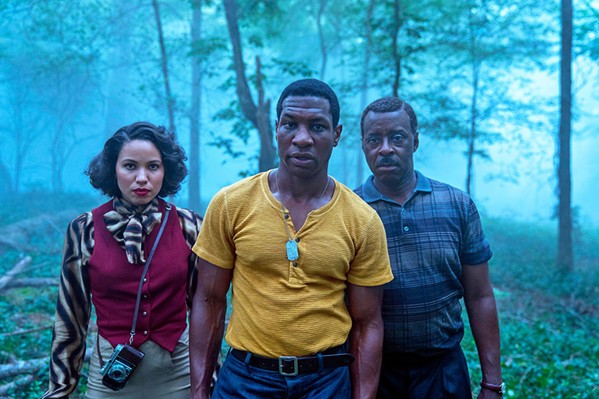 Glen This clever mashup mixes terrifying monsters, ghosts, secret occult organizations, magic, and supernatural phenomenon with racist police, sundowner towns, and cross-burning neighbors. It's filled with all the B-movie fun of drive-in horror flicks and a timely examination about America's original sin—slavery and racism. Each episode is connected, but they can also feel separate. For instance, episode 7, "Meet Me in Daegu," is set in 1949 South Korea and follows Ji-Ah (Jamie Chung), a beautiful young woman who turns out to be a mythical monster, Kumiho, who must kill 100 men to become human again. She decides to seduce and kill Atticus, thus connecting to the previous episodes. Expect a lot of gore and a lot of insightful examination of racism in America. Another episode is about a potion that allows a Black woman to become white, as she revels in the way she's treated by other white people. It's fun and serious at the same time.

Anna What a ride Lovecraft Country is, a chef's kiss blend of drama and horror. When we first meet Atticus, he's bound and determined to find his missing father and sets out with his Uncle George and Leti, and soon enough it becomes clear that their journey has taken a wild turn. There are forest monsters and invisible force fields; blond-haired, blue-eyed captors; and occult magic in the works. You definitely need to be OK with gore to get through this series; besides monster attacks there is enough blood, guts, and skin-shedding to make anyone squirm. Beyond the bigger story, Lovecraft Country gets personal with Atticus and his wounded past as a veteran and the budding relationship between himself and Leti. It's hard to peel your eyes away from the screen.

Glen Smollett and Majors are really compelling as the two leads. Despite the B-movie shlock of a lot of the story, the two never waiver in their commitment to the material. I guess Smollett came to fame in the TV series Full House (1992-94), which I'd never seen. I've seen her in a number of films but never put together it was the same actress, which to me is a testament to her ability to disappear into a role. Here she plays a strong, talented Black woman struggling to find her place in a white world. Majors is a relative newcomer. I first noticed him in The Last Black Man in San Francisco (2019), where he turned in a quiet, sublime performance, and then in Da 5 Bloods (2020), Spike Lee's newest. He's a natural and brings a vulnerability and inherent nobility to Atticus, who it turns out is somehow connected by blood to a weird cult. The implication is that his bloodline was conceived in rape by a white slave owner and cult member. We're seven episodes into a 10-episode season, and it's so interesting and well done that I'll probably watch it through again.

Anna I'll be right there re-watching with you. There's so much going on, and the story seems to come out in chunks that the audience pieces together week after week. Added to the mix is William (Jordan Patrick Smith), who seems to be the appointed leader of the cult, and mysterious Christina Braithwhite (Abbey Lee), who seemingly knows secrets about everyone. There's time loops and shapeshifting, downright creepy ceremonies, and rooms full of mystery. With names like J.J. Abrams and Jordan Peele behind it, you know it's gonna get weird. It's just the kind of weird I'm here for though, not just a shock of gore and horror, but an actual story to back it up. I loved that episode you mentioned that took us to South Korea and out of the world we were previously in yet still connected to Atticus' character while building his backstory. Majors is just great here, and Smollett brings the same game to her performance. The costuming is fantastic, the gore is visceral, and the story just keeps on giving. I can't wait to see where the rest of this season goes. Δ